After having his suspension appeal denied, Billboard Chris showed up at Twitter’s HQ to get his account back. 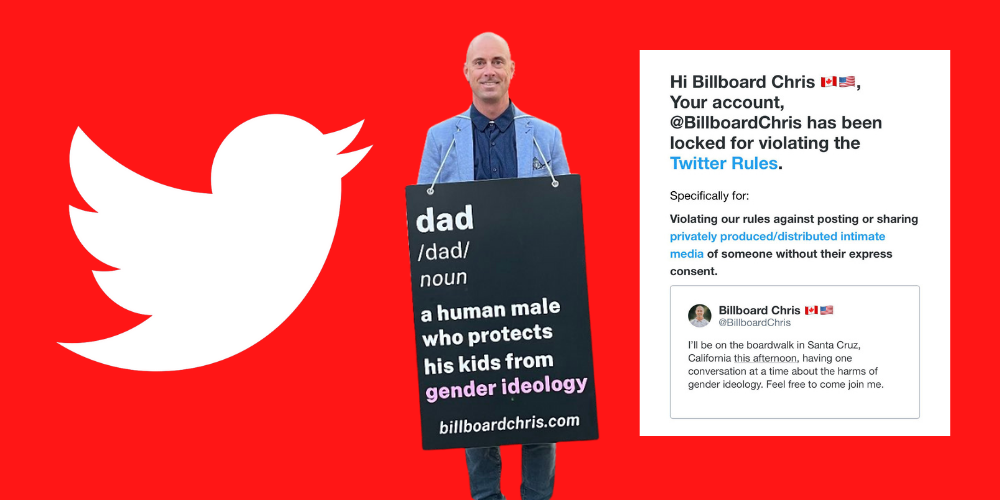 Canadian gender-critical activist, Chris Elston, known online as ‘Billboard Chris,’ was locked out of his Twitter account for a post announcing he will be talking to strangers in Santa Cruz "about the harms of gender ideology." After having his suspension appeal denied, Billboard Chris showed up at Twitter’s HQ to get his account back.

The tweet that landed Billboard Chris with a suspension read, "I’ll be on the boardwalk in Santa Cruz, California this afternoon, having one conversation at a time about the harms of gender ideology. Feel free to come join me.” Billboard Chris accompanied the tweet with a video that explains who he is and why he advocates against gender ideology. Twitter sent Billboard Chris an email notifying him that his Twitter account had been locked for “Violating our rules against posting or sharing privately produced/distributed intimate media of someone without their express consent."

The policy Twitter referenced as justification for Billboard Chris’s suspension is one to prevent doxxing, personal phone numbers, addresses, financial information, and medical records being posted online. Despite Billboard Chris’s tweet in no way violating this policy, Twitter warned Billboard Chris that "repeated violations may lead to a permanent suspension of your account."

Billboard Chris spoke to The Post Millennial regarding his initial suspension saying, "My account was locked, simply for posting that I was going to be in Santa Cruz having conversations about the harms of gender ideology. I included an introductory video with the tweet, where I explain what I do." Billboard Chris does not believe the video accompanying the nuked tweet to be what triggered the suspension, as the video still remains his page in a separate tweet, "It’s the same video that’s already in my pinned tweet."

Billboard Chris believes to be a victim of Twitter’s algorithm auto-suspending him, "The instant I hit send on the tweet, my account was locked, and Twitter alleged that I shared intimate content without consent. Billboard Chris immediately appealed the suspension but claims the appeal was denied. He told TPM about his plans to protest his suspension and continue his activism,

"I’m going to visit Twitter HQ to sort this out in person. If that fails, I will simply stand outside their front door for days, having conversations about the harms of gender ideology and the outrageous targeted censorship of my account."

Billboard Chris did exactly what he said he would do and showed up right at Twitter’s doorstep in San Francisco. He was greeted by a Twitter employee who had him fill out a complaint form, and shortly after meet with someone to discuss the issue. Billboard Chris walked out of Twitter with an unsuspended account, but no answers as to what triggered the suspension.

Twitter has begun to crackdown on content which suggests gender is binary and not interchangeable in recent months, with Twitter locking the accounts of Charlie Kirk and The Babylon Bee in March for posting that Biden’s transgender assistant health secretary Rachel Levine is "a man." After claiming that Kirk and Babylon Bee were right about Levine, Tucker Carlson was also suspended from Twitter.

Many people have become hopeful that the Twitter censorship Billboard Chris and others have been victims of will subside if Elon Musk takes over, but the Twitter buyout by Musk has been rocky for weeks over "inflated user data." Musk has been outspoken about restoring free speech to the platform and claimed that Twitter has "a strong left wing bias."