"CENSORED: YouTube/Google are offended by my criticism of the Military Industrial Complex and my advocacy for negotiated settlement in Ukraine, because they are the social media arm of that warmongering Power Elite/MIC," tweeted Gabbard. 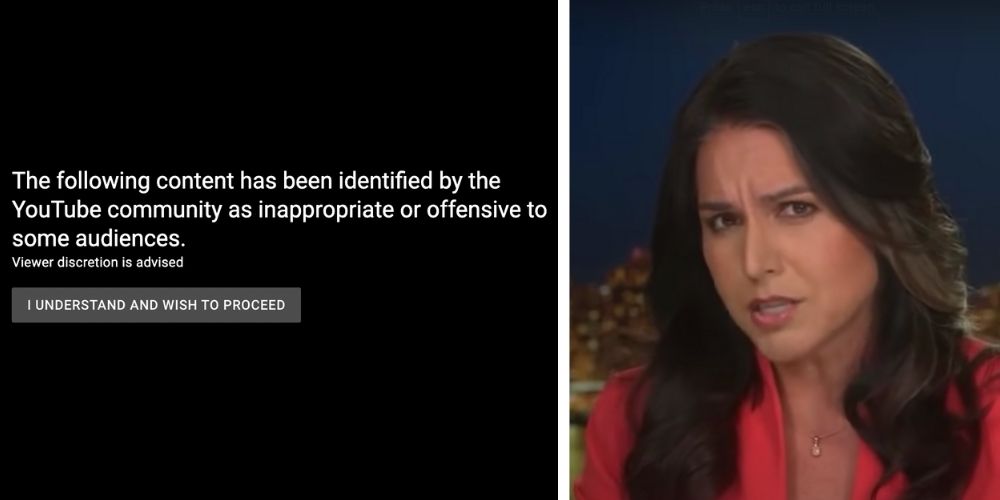 An interview with Tulsi Gabbard and Fox News host Laura Ingraham was censored Wednesday, displaying a message asking people to verify their age before watching. On a video posted to the Fox News YouTube channel on March 9, titled "Tulsi Gabbard: They want this to continue," users that are not logged in to the Big Tech video-sharing platform are asked to verify their age by logging in.

Once logged in, viewers are greeted with the message: "The following content has been identified by the YouTube Community as inappropriate or offensive to some audiences. Viewer discretion is advised."

Users are required to hit a button stating, "I understand and wish to proceed," before continuing to watch.

"CENSORED: YouTube/Google are offended by my criticism of the Military Industrial Complex and my advocacy for negotiated settlement in Ukraine, because they are the social media arm of that warmongering Power Elite/MIC."

In the video, Ingraham leads off by talking about Poland, and how the US gave NATO nations "a green light" to send jets requested by the Ukrainian military, but changed their stance after Poland said they could fly the jets from Ramstein air base in Germany.

"Congresswoman, why are we talking about no fly zones instead of the fact that for the first time, we have President Zelenskyy stepping back from his earlier NATO wishes and even demands?" Ingraham asked.

"That is literally the most important question here, Laura," the former congresswoman responded.

"You know, when I look at these issues, I think about what is in the best interests of the American people. Is what we're doing going to be good for the American people or not? And clearly this continued escalation of this conflict and this war is not in the best interest of the American people or the world frankly, which is why Zelenskyy’s statement last night with — on ABC News for the first time, that I'm aware of, opening the door, a window of opportunity where he's open to the fact of saying, 'hey, yeah, maybe we'll set this NATO membership thing aside,' and he's willing to talk with Putin directly to negotiate the outcome or the status of these disputed territories, really extending an olive branch," she continued.

She continued on to question why that hadn't been more widely covered, and why the Biden administration hasn't taken advantage of the situation to bring the conflict to an end. Ingraham surmised that the longer the conflict continued, the more money or demands Russia would try to get from Ukraine.

"Nothing that the Biden administration has done has helped to make this situation better, has helped to de-escalate the situation, which is why the only conclusion that I can draw about why they have been completely silent and not engaging at all on this window of opportunity that President Zelenskyy opened last night is that what is happening before eyes right now is exactly what they want to see continue," said Gabbard.

"Why is that? Because it's good for the military industrial complex, it makes these politicians look tough and and really you know, it allows them to have this proxy war with Russia," she added.

Gabbard continued on to claim that the aims of the government is to "turn Ukraine into another Afghanistan, turn into killing fields where this long term insurgency is supported."

Ingraham played a clip of Hillary Clinton, in which she said that "the Ukrainians are really, and I would argue, fighting for all." To which Gabbard said, "People like Hillary Clinton and Joe Biden, Kamala Harris, they all use this flowery language about how you know we've got to take a stand and pay the price, the American people need to pay, you know, so much more for gas so much more for food, make those decisions between filling their gas tank and buying groceries because, freedom?"