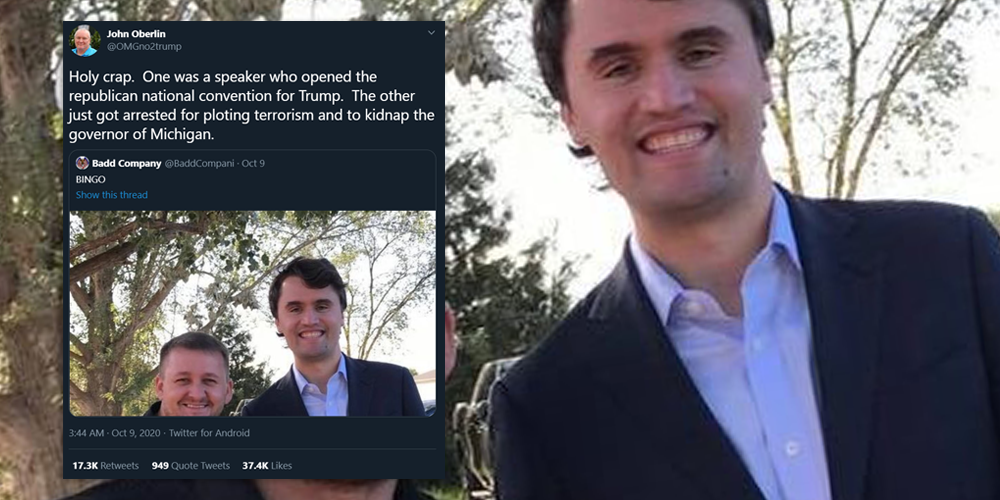 The image in question shows Charlie Kirk, the founder of the Turning Point USA organization with another man, and its caption suggesting that the other man was one of the people arrested in connecting with a recent plot to kidnap the governor of Michigan.

According to Buzzfeed, tens of thousands of people saw the incorrect information within the first 24 hours of it being up.  The above re-tweet has been deleted but not before it was allowed to spread for a substantial amount of time.

The account in question above, that of one John Oberlin, is not a verified Twitter account. Oberlin's bio describes him as "an educated guy who cares about the world and trying to make it a better place."

Another unnamed reporter with the Washington Post also re-tweeted it to his approximately 500,000 followers.

The Buzzfeed article states, ““But a web search shows that the man pictured is Alex Kuzmenko, also known as Alex Kyzik, a pro-Trump activist who lives in Idaho and was in no way related to the alleged Whitmer plot,”

It’s worth repeating that Kuzmenko has no connection whatsoever with the criminal incident in Michigan having to do with a plot to kidnap the governor of that state, Gretchen Whitmer.

Whitmer on her part has personally blamed US President Donald Trump for the incident, despite there being no evidence of any particularly strong support among the individuals and groups involved.

“Governor Whitmer of Michigan has done a terrible job. She locked down her state for everyone, except her husband’s boating activities. The Federal Government provided tremendous help to the Great People of Michigan. My Justice Department and Federal Law Enforcement announced today that they foiled a dangerous plot against the Governor of Michigan.”

“Rather than say thank you, she calls me a White Supremacist—while Biden and Democrats refuse to condemn Antifa, Anarchists, Looters and Mobs that burn down Democrat run cities…I do not tolerate ANY extreme violence. Defending ALL Americans, even those who oppose and attack me, is what I will always do as your President! Governor Whitmer—open up your state, open up your schools, and open up your churches.”