How Seattle policy has encouraged more homelessness and crime

The Seattle Housing and Resources Effort has been an abject failure that has only made the homeless problem worse. Now they’re hiding the numbers. 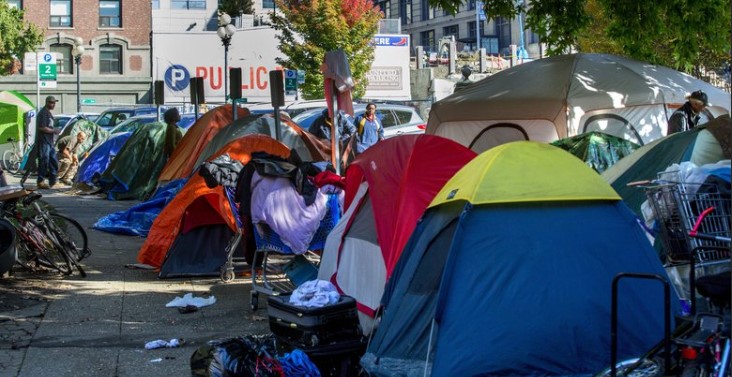 Fourteen years ago, King County pledged to end homelessness within a decade. Instead the problem has grown exponentially, catapulting Seattle to one of the worst per capita rates of homelessness in the US. While the Seattle City Council blame the problem on corporate giants like Amazon, homelessness has been growing and enabled by their continued funding of non-performing agencies that are supposed to assist people in transitioning to permanent housing.

One of these non-performing agencies is the Seattle Housing and Resource Effort (SHARE). According to their website, SHARE runs 14 indoor shelters around Seattle, for which it annually receives several hundred thousand dollars from Seattle’s Human Services Department. Most of these shelters are owned by churches. Besides the shelters, SHARE operates a network of homeless camps known as “tent cities.” The group says that “up to 450 people each night find safety, shelter, dignity, and respect” in its “self-managed” shelters and camps, but it has never provided any documentation for that figure.

David Preston, a citizen journalist with the neighborhood group Safe Seattle, did an investigation of SHARE’s finances and practices in 2016. He discovered that “The group resists attempts to monitor its numbers or performance as an ‘invasion of privacy.’” The group has even gone so far as to use a fraudulent, unlicensed accountant for years.

SHARE views homelessness as a valid lifestyle—a lifestyle of choice—and while it does get a number of people off the street temporarily, it makes no claim of getting them into jobs, permanent housing, or addiction treatment programs. “We are not a social service organization,” they declare. “We are a self-help group.” Preston discovered during his investigation, “If you visit a SHARE tent camp or shelter you will meet people who have been homeless for years. As a rule, these people do not have caseworkers, and many/most have no definite plan for transitioning into an apartment. When they leave one tent camp or shelter, they simply find another. Or they go back to the streets. Or they move to another state.”

Since Preston’s investigation in 2016, SHARE’s failures have become more visible. One of SHARE’s most public failures was the Licton Springs Tiny Home Village in North Seattle. This village opened in 2017 and used what is called the “low barrier” to entrance model. This means that residents can enter without identification and continue using drugs and alcohol. It also means criminals with outstanding warrants, drug addicts and alcoholics can continue their behavior in shelter services provided by the city with no expectation for treatment or prosecution.

According to the Seattle Times, calls for police service on the block where Licton Springs sits spiked 62 percent in a year. The Times story continues that only 17 people from Licton Springs Village got into housing, that was lower than other city-sanctioned tent camps of a similar size, which got an average 30 people per tent city into housing in 2017. Police reports in the area went up 103 percent in the year Licton Springs opened.

A community meeting was held in March of 2018 to discuss the renewal of the Licton Springs Encampment operating permit. Neighbors showed up to voice their concerns and tell stories of being victimized since the encampment opened. The meeting was all for show because that same day the city had already renewed the permit before the meeting was even held.

Some of these neighbors filed public disclosure requests for crime data regarding the encampment. The data for the block of Licton Springs had been removed and was not available on public websites. They were told:

Three weeks ago, there was a deadly shooting in downtown Seattle. The tragedy was not shocking to residents because it took place in a section of Seattle that has been a major drug and crime corridor for years. The Mayor, City Council, Police Chief all reiterated how safe our city was, especially in comparison with other cities, but this is very hard for citizens who see deadly headlines of assaults by prolific offenders and open air drug use to accept. Local journalist Brandi Kruse of Q13’s The Divide was curious about these claims by officials and went to check the numbers. She discovered that the crime dashboard for the SPD has been down for the past 9 months. For all the claims of crime being down by our public officials, there is no way to see it for ourselves.

Compstat, Patternizr, and other systems are used by cities and police departments around the country in crime tracking and prevention. Why is it that in Seattle, one of the tech capitals of the country, the data is so hard to come by? Could it be that elected officials do not want to acknowledge the rising crime citizens can see with our own eyes? Is it possible that these same officials do not want to look at the correlation between the people living on the streets suffering from mental illness, the open air drug use, and a rise in crime?

Now the Seattle City Council wants to expand the eight sanctioned villages/ encampments to 40. According to council member Dan Strauss in a quote to the Seattle Times, “If all 40 [encampments] were built to the maximum capacity, we would be able to bring everyone inside.”

Unfortunately, Strauss’ math doesn’t add up. If there are 11,199 people “experiencing homelessness” in Seattle, 5,700 of whom are “unsheltered”, and each camp/village hosts an average of 43 people, you would either need to create camps that could hold 140 people each or have a lot more encampments than 40. Why is the council so determined to double down on this failed policy rather than offering drug and mental health treatment and enforcing the law?

SHARE is a non profit and receives donations of food and clothing from the public. Tiny homes are donated by Seattle companies like Amazon and built by volunteers. So where is the money allocated to SHARE by the City of Seattle going?

Also discovered by Preston’s research, “SHARE shelter residents get ‘participation credits’ for attending political demonstrations and rallies. Each resident must earn a number of these credits each week. Otherwise, they face immediate eviction. Other options for earning the credits include doing trash pick-up, guard duty at camp, and other menial tasks. Compared to doing hours of trash pick up or standing sentry at 2 AM, sitting through a meeting at City Hall must look good. Using the participation credit system, Morrow(SHARE director) can virtually guarantee a good turnout at rallies. Or protests.”

Typically, these residents make appearances on behalf of extreme policy proposals by Marxist City Council Member Ksahama Sawant. Sawant has made taxing corporations like Amazon a focal point of her policies, constantly blaming them for the squalor on Seattle’s streets but never attributing the cause to the drug or mental health problems or the crime that always accompanies these problems. Homeless SHARE residents have become pawns of politicians.

The illusion of safe streets means that politicians get to keep their jobs come election season. As long as Seattle politicians continue to fund non-performing agencies that advocate on their behalf and suppress crime data from the public, the cycle of suffering for the people living on the streets and the surrounding homeowners and businesses will continue.