"His track record on transgender rights is exemplary," the Human Rights Campaign, an activist group known for its strong support of the medical transition of children, said of Josh Shapiro, endorsing him for governor of Pennsylvania. 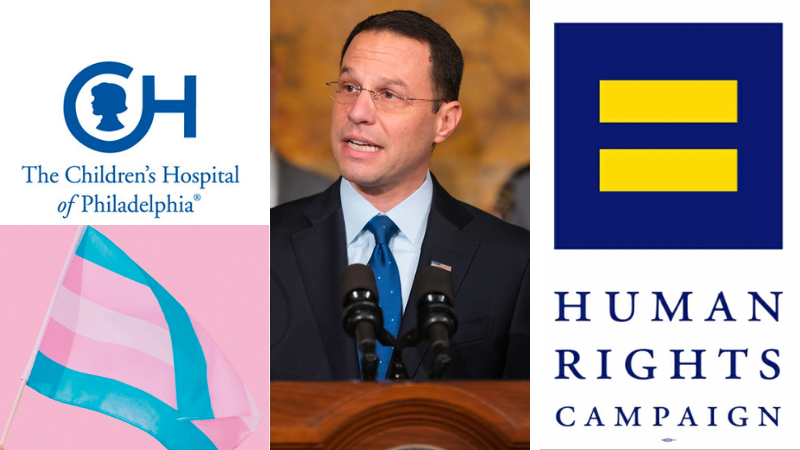 The Human Rights Campaign, an activist group known for its strong support of the medical transition of children, has endorsed Josh Shapiro for governor of Pennsylvania, just months after it awarded the Children's Hospital of Philadelphia an award for excellence in LGBTQ+ healthcare.

"Josh Shapiro has been steadfast in defending and supporting the LGBTQ+ community," Human Rights Campaign declared. "His track record on transgender rights is exemplary, including legal actions in support of transgender students using the bathroom that conforms with their gender identity and against Trump administration policies that … sought to allow discrimination against transgender people in housing and medical care."

The Human Rights Campaign describes itself on its website as being "at the frontlines fighting back" against what it believes to be "discriminatory bills which target transgender kids, including dozens upon dozens of bills that try to ban trans kids from … receiving life-saving health care." Here they are referring to bills which seek to prevent minors from being given exerimental drugs that block their puberty, irreversible cross-sex hormones which can leave them sterile, and surgeries such as bilateral mastectomies, all performed in the misguided belief that this will change them into the opposite sex.

In 2022, the Human Rights Campaign awarded the Children’s Hospital of Philadelphia top marks in its Healthcare Equality Index, which describes itself as “the national LGBTQ+ benchmarking tool that evaluates healthcare facilities' policies and practices related to the equity and inclusion of their LGBTQ+ patients, visitors and employees.”

CHOP was recognized by the HRC for leadership in LGBTQ+ Healthcare Equality, which included the achievement of its Gender and Sexuality Development Program nearly doubling the number of children it treated, which according to a since-deleted announcement on their website is "now nearing 3,000."

CHOP also scored 10/10 for being a "welcoming and affirming setting."

The founders of CHOP's gender clinic are adamant that who leads the state is crucial in order for them to continue to provide medicalized gender transitions for minors. In 2015, the co-founders stated that it was their hope that Pennsylvania's governor would take a page out of then-New York Governor Andrew Cuomo's gender playbook, and demand that insurers in the state cover these treatments.

"To ensure that health insurance policies do not discriminate against trans* people," they wrote in 2015, "the state governor or state insurance commissioner can take action." They gave the example of Cuomo, saying "in a 2014 letter sent to all insurers in New York State, Governor Andrew Cuomo stated, 'An issuer of a policy that includes coverage for mental health conditions may not exclude coverage for the diagnosis and treatment of gender dysphoria.'"

This clinic was given top honors by HRC, which is backing Shapiro to lead the state.

HRC is a strong supporter of medically transitioning gender-confused children. In their resource "Supporting and Caring for Transgender Children" they recommend socially transitioning children; promote puberty blockers with the outdated advice that the drugs are fully reversible; recommend cross-sex hormones which they describe as "partially reversible" and recommend bilateral mastectomies and genital surgeries.

The HRC "Schools in Transition" guidance document includes a section on keeping "unsupportive" parents in the dark about their child’s change of name and pronouns, with tips on how "to proceed through the collaborative process of figuring out how the school can support the student and balance the student’s need to be affirmed at school with the reality that the student does not have that support at home."

Last month, The Post Millennial reported on a CHOP training video in which gender clinic staff are taught to secretly affirm a child’s self-declared gender identity and then to coerce cautious and concerned parents into accepting it.

Co-founder of CHOP’s gender clinic, Nadia Dowshen, said that the clinic receives referrals of children to their program from the foster care system and from homeless shelters, as reported by The Post Millennial. It was uncovered that the gender clinic has worked closely with  Dr. Rachel Levine, the Biden administration's assistant secretary of the Department of Health and Human Services, who publicly endorsed gender clinics transitioning emancipated youth who are on the street. Levine used to be the medical director for the state of Pennsylvania.

"If they are under 18 and they are on the street and they are completely emancipated from their parents, then you can do treatment," said Levine to a member of the audience at the It’s a Transgeneration: Issues in Transgender Medicine event at Franklin and Marshall College in 2017.

CHOP has been recognized by the Human Rights Campaign for excellence in LGBTQ+ healthcare since 2014.
ADVERTISEMENT
ADVERTISEMENT
chop 2