Rhode Island Democratic Governor Gina Raimondo was caught without a mask at a wine bar last week, just one day before beginning her quarantine, following the head of the RI health department testing positive for the coronavirus. 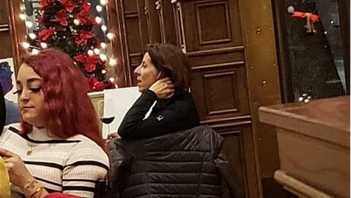 Rhode Island Democratic Governor Gina Raimondo was caught without a mask at a wine bar last week, just one day before beginning her quarantine and following the head of the RI health department testing positive for the coronavirus.

A photo caught Raimondo at the Barnaby’s Public House restaurant in Providence for a wine and paint night, after the governor encouraged residents to stay home earlier this month.

According to ABC6, Erica Oliveras who took the photo, says she and Governor Raimondo were both at Barnaby’s Public House in Providence on Friday night for a wine and paint night. Oliveras says she didn’t realize the backlash the picture would get, with many pointing out the fact Raimondo wasn’t wearing a mask.

"Shame on you Gina," Susan Goodman, from Providence, told ABC6. "She shouldn’t even be at an event like that. You can drink wine at home. I’m an experienced wine drinker Gina, do it at home."

Under Rhode Island’s "pause", indoor restoration and entertainment facilities are forced to close. A spokesperson for the Department of Commerce told ABC6 news that the guidelines are referring to places like arcades or entertainment venues. Many Rhode Island residents question the difference between imposing restrictions on some businesses, instead of all, and find the regulations arbitrary.

Erica Oliveras, the woman who took the photo, came to the governor’s defense telling ABC6 that Raimondo only removed her mask when she was drinking and followed all proper protocols.

"When she came into the building, she had her mask. Whenever the waiters approached her, she had a mask on," Oliveras said. She believes the governor being there is a positive for the community. "The main thing I took out of it is wow, she’s here at a small business and she’s supporting," Oliveras added. "She came in, she supported, she bought wine, she engaged."

While Raimondo did not technically break any of her state’s "pause" guidelines, many believe that Raimondo has created a double-standard by engaging in a non-essential activity outside her home after telling residents to avoid the same behavior.

Earlier this month, Austin Mayor Steve Adler threatened residents with stricter lockdowns while vacationing in the resort town of Cabo San Lucas on a trip following his daughter’s downtown wedding.

"We need to stay home if you can. This is not the time to relax. We are going to be looking really closely… We may have to close things down if we are not careful," Adler warned residents in a Facebook.

With this incident, Raimondo joins Adler and the growing ranks of Democrat lawmakers who have fined, shamed, arrested, and violated their own orders which closed churches, schools and businesses in the name of public health over a virus with a 99.98 percent recovery rate.