If you don't 'resign for diversity,' does that make you racist?

A meme was shared as a joke, saying that white people who believe in social justice should "resign for diversity." But while it seems insane right off the bat, it is not a new concept. 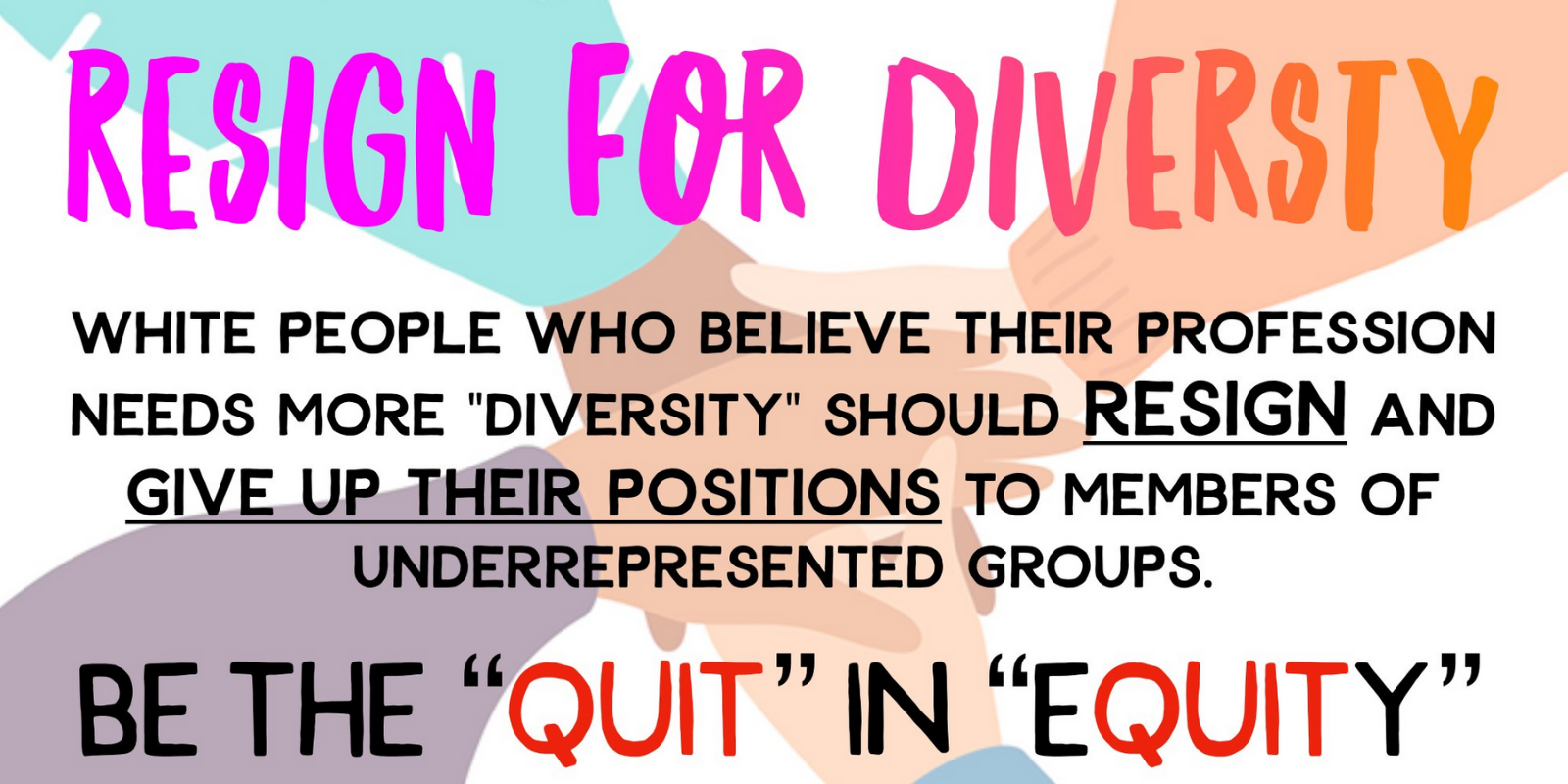 A meme was shared as a joke, saying that white people who believe in social justice should "resign for diversity." It was taken up by conservative thinkers and free speech absolutists who undoubtedly believe the opposite. But while it seems insane right off the bat, something that would likely give the lie to a social justice movement advocated for by white people who are unwilling to give up their own power, influence, or even careers, it is not a new concept.

Social justice activists and pundits have been suggesting for some time that white people should not just step back from the public conversation to give space to diverse voices, etc., but should leave it entirely.

It's not new, but it's certainly kicked into high gear—this idea that white people, by virtue of the ancestral sins of their race and the contemporary crime of blindly accepting and acting on their societal privilege, should step back from their positions of leadership.

A column by Sohum Pal in a 2017 issue of Yale News instructed: "White students: Take a few steps back. You already know: when we enter white-dominated spaces, we take on the implicit roles of leadership, expending invaluable emotional and intellectual labor. It is time we were given the titles and power we deserve."

An AMS blog in the same year told white people, specifically "white cis het" men: "Not to alarm you, but I probably want you to quit your job, or at least take a demotion. Statistically speaking, you are probably taking up room that should go to someone else. If you are a white cis man […] you almost certainly should resign from your position of power. That's right, please quit. Too difficult? Well, as a first step, at least get off your hiring committee, your curriculum committee, and make sure you're replaced by a woman of color or trans person."

Jack Kelly writes in Forbes that "To Fight Systemic Racism, CEOs And High-Profile Professionals Should Step Down And Offer Their Jobs To People Of Color." He recommends that instead of talking about fighting systemic racism, "...CEOs, board of directors and top executives can lead by example and help foster change. They could step down and ask to be replaced by a black professional or another member of a minority group, in a serious effort to amplify marginalized voices and representation at the highest level."

Joan Walsh, in The Nation, instructed white people to Step Up—and Step Back—Right Now. Walsh's message was specifically for white people protesting alongside BLM in the wake of George Floyd's death in May 2020. She wrote: "...white people should step back. We should look for and defer to black protest leadership. We should certainly not be the people leading in smashing windows. We should not be the people saying 'They're going to kill you anyway' when black women ask us to stop goading police into reaction and abuse."

In an article in TIME magazine called "White people must be twice as kind," author Savala Trepczynski, who is the executive director of the Center for Social Justice at the University of California's Berkeley School of Law, writes that she asked a white woman to step off the sidewalk and back into her driveway in order to maintain social distancing. The woman did so, but rolled her eyes in annoyance. Trepcynski said that the woman threw "her whiteness at me like a rock."

Trepczynski wrote that this encounter, of telling a woman to move out of her way to oblige pandemic-inspired social distancing guidance, to ensure specifically that there was a six-foot bubble of physical space around each of them, was an exhibition of racism on the part of the white woman. "And what I experienced," she writes, "was a white person being ticked off by my black presence in front of her house, and exercising her privilege to make her annoyance known. How else could I experience it?"

Writing for an HIV-specific medical blog, Jaime M. Grant said that white people should follow her example and resign. "White People, It's Time to Resign. I Did," details all the ways that white people have failed humanity, and instructs them to leave their efforts, to abandon the ship of trying.

Grant writes: "My white people – it's time to resign […] to ensure that Black and Brown colleagues in our midst, leaders in our networks – take over the positions of power we have completely botched. It's time. It's past time."

Grant said that the protests in the summer wouldn't be happening if it weren't for white people at large, who had "...seriously considered the deadly impacts of our racist power and resource hoarding."

She goes on to say that "The planet is dying of white supremacist extraction." Banking is also a problem, health care is something white people messed up, and corporations are simply "monuments to white supremacy."

Bridget Huff, progressive caucus chair of the Democratic Party in Michigan, said that white people must show they are allies to the social justice cause.

"You step up and offer what you have to give, but you don't stay there. You step back and you let people of color and the leaders in these movements ask you 'can you do X, Y or Z,'" stated Huff. The way to do this is with labor, which seems like something all parties should engage in equally in a volunteer movement, but Huff said this work should be designated, basically, along racial lines. "If they're asking you to follow the protest and clean up the trash, [don't think] that that's an insult. That's something that you can do," Huff argued.

Money is another way Huff indicated that white people should step up then step back. White people can contribute by "Giving money, food, water and medical supplies to protest organizers. 'I think as white people we're just so conditioned [to believe] that we … have so much to offer that we should be stepping up and leading, but that's not what the Black community needs right now.'" And "Donating to bail funds 'It took white kids getting hurt for people to finally step up and care," Huff said, "But there's so much you can do.'" Finally, Huff says white people should "Listen," she said. "Let the people closest to the pain lead."

Tre Johnson for the Washington Post writes that "...when things get real — really murderous, really tragic, really violent or aggressive — my white, liberal, educated friends already know what to do. What they do is read. And talk about their reading. What they do is listen. And talk about how they listened." He recommends that they try something else, and take up an activist stance in most corners of their lives. He recommends that people take up an "...earnest willingness to dismantle systems that stand in our way — be they at your job, in your social network, your neighborhood associations, your family or your home. It's not just about amplifying our voices, it's about investing in them and in our businesses, education, political representation, power, housing and art."

If you don't do these things, as a white activist, social justice advocate, or person, does that mean you are racist? Will white people who don't take this idea to heart that the way to elevate other people is to either remove themselves, give up the position they've attained, and give it to someone who, by virtue of their skin color is either more deserving or more entitled to it, be judged harshly?