While many states are rolling back their gas taxes due to spiking prices impacts on families, the transportation package is directly funded by taxes on gasoline, which according to the Washington Policy Center, amounts to a $5.4 billion tax increase over the next few years. 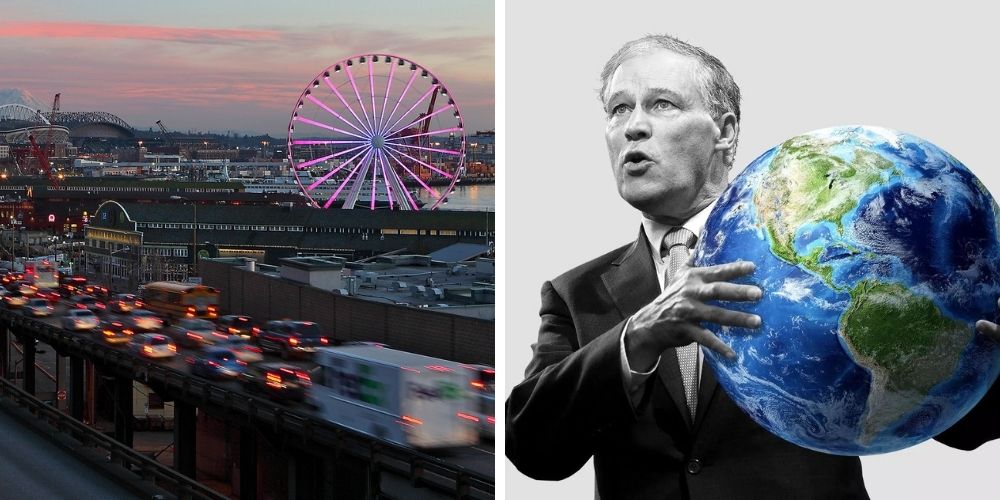 Washington Democrat Governor Jay Inslee signed a bill last week that aims to ban most non-electric vehicles in the state by 2030. This follows the move of states like California and New York announcing bans on gas-powered vehicles, aimed at ending their sale by no later than 2035.

Inslee signed the $16.9 billion "Move Ahead Washington" package which included the bill for all publicly owned and privately owned passenger and light duty vehicles 2030 model or later that are sold, purchased, or registered in the state to be electric. Inslee claimed the legislation would combat climate change. Though his pledge to combat climate change maybe the one thing people know about Inslee outside of the state, if they have even heard of him, his efforts usually fall flat.

Additionally, while many states are rolling back their gas taxes due to spiking prices impacts on families, the transportation package is directly funded by taxes on gasoline, which according to the Washington Policy Center, amounts to a $5.4 billion tax increase over the next few years.

According to the legislation, "On or before December 31, 2023, the interagency electric vehicle coordinating council ... shall complete a scoping plan for achieving the 2030 target."

This even as transit ridership has declined. According to the nonprofit Commute Seattle's annual survey of downtown businesses, the number of transit commuters in downtown Seattle has tanked. In 2019, almost half of downtown commuters took transit to work, but by the end of 2021, only 18 percent did due to the shift to remote work.

Previously, the Downtown Seattle Association estimated that only 6 percent of all downtown employees worked remotely. However, the number spiked to 46 percent during the pandemic, according to the survey. Additionally, biking, walking and carpooling to downtown declined as well, yet the number of workers driving alone to work remained about the same.

According to Commute Seattle's data, 58 percent of workers switched to telework at some of the region's largest employers.

Aside from remote work cited in the survey, many area residents are wary of transit due to rampant drug use on trains and buses and multiple assaults on transit riders. Even Metro bus drivers fear for their safety.

Democratic State Sen. Marko Liias touted $216 million in funding as part of the legislation for school-based bike programs for students to have access to different types of transportation, along with a comprehensive safety course.

However, many questioned what the funds were being used for considering that if you bought every single one of the 1.6 million kids in Washington a bike, even those who already owned one, at an estimated $100 a pop, assuming no bulk discounts, that is only $160 million of the funds vs. $216 million allocated.

Aside from the finances, the plan seemed exorbitant given the climate of the state which is rainy eight months out of the year.

The law was endorsed by environmental groups that aim to end the use of fossil fuels entirely such as Coltura, a nonprofit that advocates for phasing out the use of gasoline which worked with Democrats in the state legislature to pass the bill. Co-executive director Matthew Metz said regarding the bill: "The war in Ukraine and the burden of high gas prices on families demonstrate the importance of ending our dependence on gasoline and preparing for an all-electric transportation future. By targeting 2030 as an end date for the sales of gasoline cars in Washington, Clean Cars 2030 gives confidence to consumers, automakers, utilities, investors, and others that now is the time to go all-in on an all-EV future."

Though the bill only establishes a target for most electric vehicles by 2030, the plan is to eventually get rid of any vehicle that uses gasoline in Washington.

Liias added: "Clean Cars 2030 outlines a clear path forward for the future of the electric vehicle transition in our state. This part of our Move Ahead Washington plan will create a timeline with the data, tools, and guidelines that every sector from governments to businesses can plan for with confidence."

The challenge for state Democrats is now how to replace the gas tax if their elimination of gas-powered vehicles is successful. Experiments are currently underway to implement a usage tax based on miles driven and/or a congestion tax.