"Many Port truck drivers only get paid if they pick up and drop off containers. If they get blocked from going in and out, they won’t get paid. This will impact their livelihood and their families." 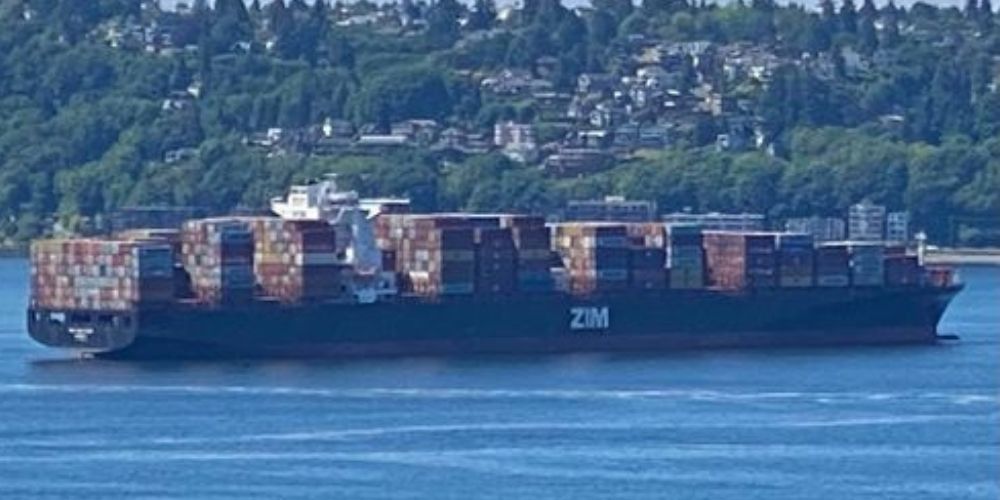 A large container ship owned by ZIM, an Israeli shipping company, has remained moored in the middle of Elliot Bay near Seattle since last week when Antifa-backed, anti-Israel groups threatened to block the ship from unloading.

Update: According to sources at the port, the ship remains moored in the bay due to a backlog at the port.

In 2018, ZIM entered a partnership with the 2M Alliance, one of the world’s largest shipping organizations and has been listed on the New York Stock Exchange (NYSE) since February 2021. The company transports products from many different countries all over the globe.

Antifa activists have allied with the Falastyniat group, a "grassroot collective of diasporic Palestinian feminists in Seattle living & organizing at the intersection of gender justice and Anti-colonialism."

The irony appears to be lost on many considering that Israel is one of the only countries in the Middle East where women are allowed to hold public office, drive a car, or even simply leave their house alone. Israel is also the only country in the region where the LGBTQ community is welcomed and not persecuted, tortured, or imprisoned.

Groups like the Arab Resource and Organizing Center who are working to stop the ship are part of the antisemitic Boycott, Divest, Sanction movement which is committed to stopping the sale and production of goods from the Jewish state.

Studies have show that the BDS movement has little to no effect on Israel but rather, adversely affects retailers in other countries that are attempting to sell the products, as well as Palestinians who work for Israeli companies.

One example is the SodaStream plant which used to be in the West Bank industrial zone of Mishor Adumim, where the Israeli carbonated beverage company employed 1,300 workers. According to The Times of Israel, of that workforce, 350 were Israeli Jews, 450 were Israeli Arabs and 500 were West Bank Palestinians. Pay and benefits were identical for workers in comparable jobs, irrespective of their citizenship and ethnicity.

In October 2015, following pressure from the BDS movement, which launched a vicious campaign against SodaStream and spokeswoman Scarlett Johansson who is Jewish, the company closed the plant and caused 75 Palestinians to be laid off.

Antifa allied with antisemitic activist groups during the latest conflict between Hamas and Israel. The anarchist group helped publicize events across North America commemorating the attempted mass genocide of Jews across the Middle East by Arab countries in 1948.

Activists attempted to lure Jews and pro-Israel counter protesters to the events in order to assault them. Wanrnings of the plan were sent to Jewsh organizations across the US and Canada. Videos of antisemitic attacks at the events at the hands of Antifa and pro-Palestinian activists were shared across social media.

Last week, a ZIM ship was forced to leave Oakland Harbor in California without unloading after longshoremen refused to cross an anti-Israel picket line of activists.

Port spokesman Robert Bernardo said in a statement that Port officials support free speech as well as the right for people to assemble peacefully but added, "federal policy dictates that international commerce cannot be stopped. This means that groups can protest, but they cannot disrupt commerce. The Port has been engaged with our public safety partners to maintain safety and security while ensuring the timely flow of commerce at the Oakland Seaport."

According to Bernardo, 84,000 jobs are provided by the harbor and affiliated trucking companies and blocking commerce at the port will jeopardize local jobs. "Many Port truck drivers only get paid if they pick up and drop off containers. If they get blocked from going in and out, they won’t get paid. This will impact their livelihood and their families."