After watching local politicians and thousands of protestors mourn a failed genocide of the Jews, is it time to leave Seattle?

I watched thousands in Westlake Park celebrating an attempted genocide of my people. Since then, I have read justifications of the event and the hate in local publications like The Seattle Times. 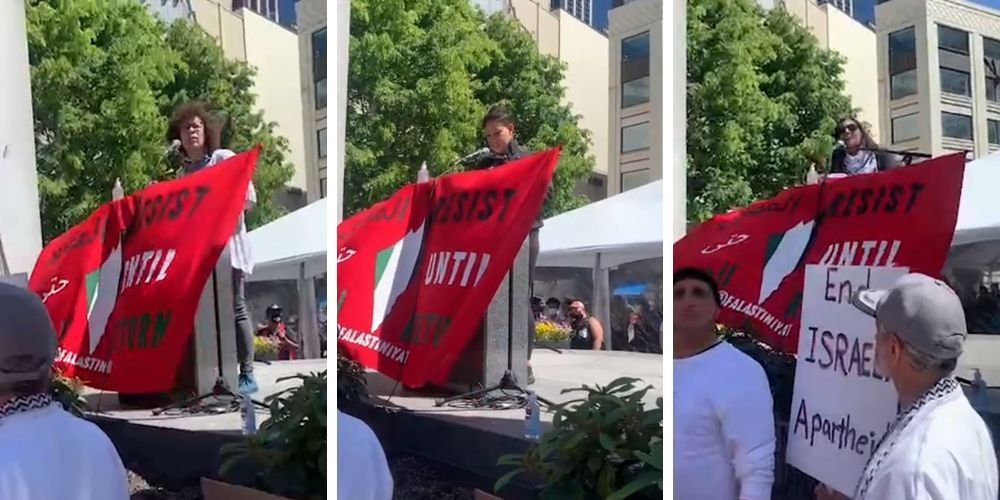 Last month, I watched thousands in Westlake Park celebrating an attempted genocide of my people. Since then, I have read justifications of the event and the hate in local publications like The Seattle Times.

The event marked "The Nakba," Arabic for "The Disaster." The official date was established in 1998 by mass murderer Yassir Arafat, to mark the anniversary of the expulsion of almost 1 million Jews from Arab countries. Many of those same countries attempted to annihilate the fledgling Jewish state after the Jews declared independence. "The Disaster," is that the Arabs were unsuccessful at completing a mass genocide of the Jews.

Washington State Democratic Representative Kirsten Harris-Talley, whose district includes Seward Park, home to three of the oldest synagogues in Washington, Seattle City Council hopeful Nikkita Oliver and Marxist Seattle Council Member Kshama Sawant, spoke at the event to promote their own agendas, while demonizing the Jewish state behind a banner displaying the destruction of Israel. Activists assaulted Jews who peacefully protested, and the Seattle media was silent.

Some claim that if Israel didn’t exist, there wouldn’t be antisemitism. Do they expect anyone to believe there was no antisemitism before 1948?

Joshua led the Jews into the land in 1300 BCE after 40 years in the desert, following hundreds of years of slavery and the exodus from Egypt. In 1000 BCE, the Kingdom of David with Jerusalem as its capital was established and the first Temple was built in 957 BCE on the Temple Mount, 1600 years before the existence of Islam. Today, Jews are forbidden from praying there by the Waqf, an Islamic religious group, law that is enforced on the Temple Mount by Israeli police.

In 586 BCE, the Babylonians destroyed the Temple. In 515 BCE Jews returned from exile under the Persian Empire to join those that remained to rebuild the Temple. Romans conquered Judea in 63 BCE and destroyed the 2nd Temple in 70 CE.

Following the Bar Kochba revolt in 136 CE, 500 years before Islam, the Romans were so angry with the Jews, they razed the country, salted the earth and renamed it Syria-Palestina after the biblical enemy of the Jews, the Philistines, who had been wiped out.

Islam wasn't founded until the 7th century. By 1517, Palestine was still not a state, country or kingdom, but a territory under the Ottoman Empire, which barred Jews from purchasing land, yet Jewish communities remained in the region.

In 1882, in an attempt to fulfill daily prayers of a return to Zion and resurgence of the Davidic Kingdom, Jews fleeing pogroms in Russia immigrated to the area. Jewish settlers escaping antisemitism in Europe using agriculture skills, pushed back the deserts and drained the swamps. A flourishing economy began attracting more Arabs to the area.

The Balfour Declaration of 1917 promised Israel to the Jews and Jordan as a state for Palestinians. Jordan today is 70 percent Palestinian. Pogroms and riots by Arabs against the Jewish population continued. From 1922-1947 the British Mandate attempted to walk back promises of the Balfour Declaration with less land for the Jews. Yet, they accepted every plan, while the Arabs rejected every scenario involving a Jewish state.

During World War 2, Arabs allied with the Nazis and The Grand Mufti of Jerusalem Haj Amin al-Husseini who suggested his own "Final Solution" for the Jews to Adolf Hitler.

"The Nakba," was one of many attempts throughout three millennia to wipe out the Jews. Now, souvenirs are sold at ruins of the empires that tried.

During the recent conflict, 1.9 million Arab Israelis were under fire from rockets launched by Hamas. 1 in 7 of Hamas’s rockets landed on Gaza. Before the attacks, Israeli politicians were about to form a coalition government with Arabs in Israel’s Knesset.

The Nakba event equated all Palestinians with Hamas, a terrorist organization. Organizers, speakers and participants portrayed a one state solution, a scenario where Israel does not exist. While participants demonized Israel as an “apartheid” regime, they ignored the inconvenient truth that Jews are not allowed in Gaza, there are no Jews in Jordan, Saudi Arabia or Syria. Only a handful live in Iraq, Iran, Egypt and Lebanon. Meanwhile Arabs have full voting rights in Israel and are members of the country's supreme court.

Participants celebrated the objectives of terrorists, spread the narrative of Hamas, Fatah, Hezbollah. Politicians railed against our history and beliefs and looked the other way when violence has targeted their own Jewish constituents. Jews in Seattle wonder if, like so many other times in our history in the diaspora, is it time to leave?