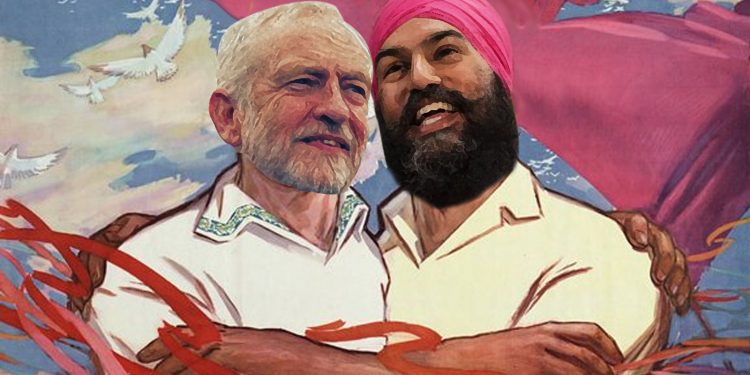 Corbyn released a tweet where he said he spoke with Singh on the phone on how their movement would aim to tackle the “populist far right”, and how they must “work across borders to tackle global inequality, the power of big corporations and the climate emergency.”

Singh responded with a tweet of his own, saying he thinks they can be united in their “fight for an economy that works better for all people, not just the wealthy few” and creates a “cleaner, fairer world where everyone can build a good life.”

Many believe the left is trying to adopt a more populist stance following the rise of the alt-right in Europe and the election of Donald Trump in the US.

Jeremy Corbyn brings nationalization and Keynesianism back in the British House of Commons; while Singh’s U-turn from Mulcair’s centrism signals NDP’s shift back to big-government Nordic social democracy.

With the abject failure of the British Conservatives in dealing with the economy and Brexit, Labour and the newly-formed Brexit Party are in a toss-up for the next elections. Meanwhile, the failure of the centrist Liberals casts a shadow on NDP’s future with Conservatives polling in first place.

For the left, there can be no better time to unite. Bernie Sanders, a self-avowed “Democratic Socialist” is currently the most likely Democrat to beat Donald Trump; Mette Frederiksen of Denmark won her elections on a platform of Social Democracy and anti-immigration to route the right.

However, as utopian this might sound from a socialist perspective, the left has some major issues to deal with.

Jeremy Corbyn’s soft-spot for Hamas and Hezbollah raised red flags on his anti-semitism. While he has fired some of his MPs for being anti-semitic, a majority of Jews and Jewish organizations worldwide have condemned him vociferously.

Singh has been a vocal supporter of Corbyn ever since at least 2017, and he needs to take these concerns into account. On top of that, Singh currently has a majority of his seats from Quebec, a province that does not view a turban-clad politician with a great deal of satisfaction.

The left also has its immigration stance all over the place. Sanders and Frederiksen are pro-hard borders while Singh seems to be more open to getting refugees.

Lastly, Corbyn is seen to be taking a more class-based approach while Singh still seems to indulge in a great deal of identity politics.

Whatever the case may be, a unified platform could possibly be the only solution for the left going ahead, as their policy divisions and contentious accusations currently haunt their voter base.