Scotland has joined the nations that are so on board with men turning into women that they allow the lie to replace truth in official documents, statistics and in the courtroom. 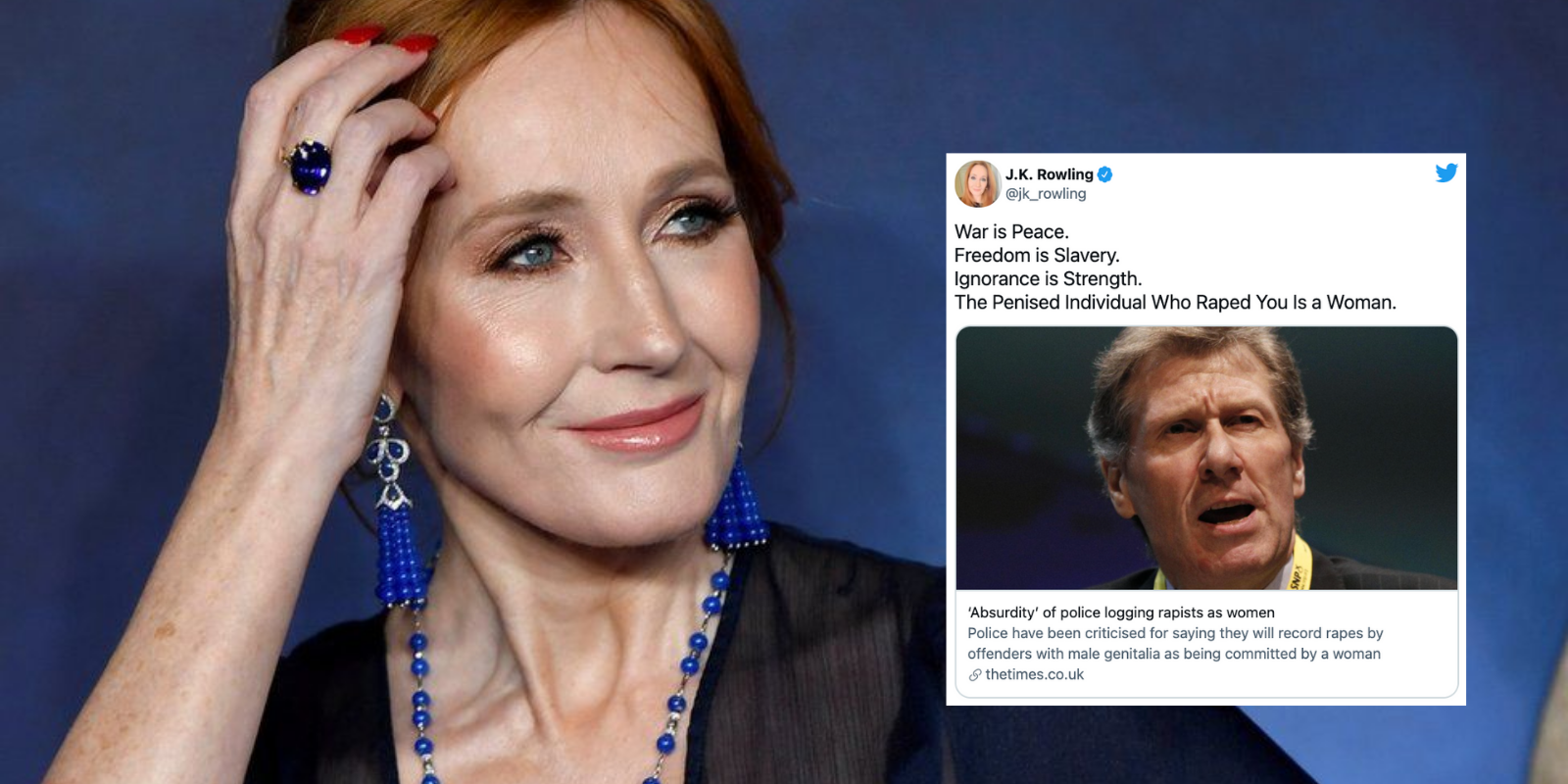 Biological males who identify as women are now officially women according to the criminal justice system, and JK Rowling has no tolerance for it. Scotland has joined the nations that are so on board with men turning into women that they allow the lie to replace truth in official documents, statistics and in the courtroom.

This means that if a male who identifies as female rapes a female, that rape is classified as a woman committing rape, with, presumably, her penis. And because of provisions and policies that require the use of preferred pronouns, a woman who was raped by a biological male who identifies as female would have to call her rapist a "she." In order to meet these guidelines, a woman who has been the victim of rape would essentially have to perjure herself in describing what happened to her before a court of law.

Biological males who identify as females are placed in women's prisons in many US states and in Canada, where they can, and have, raped women. The state of California has begun putting condoms in women's prisons to account for the fact that this is not only probable, but actually happening. Canada has changed their reporting methods for crime statistics, meaning that crimes committed by biological men who identify as women are counted among crimes that women do.

Rowling quoted George Orwell's 1984 when she tweeted out a link to the Sunday Times article with the words "War is Peace. Freedom is Slavery. Ignorance is Strength." And added her own "The Penised Individual Who Raped You Is a Woman."

Police in Scotland will "log rapes as being carried out by a woman if the accused person insists, even if they have not legally changed their gender," The Sunday Times reports. This is in anticipation of new, gender self-ID laws in Scotland, where a person need only utter the gender whim for it to be believed.

The Sunday Times notes, however, that rape is defined officially in Scotland as "nonconsensual penetration with a penis, so it cannot be committed by someone without male genitalia."

Detective Superintendent Fil Capaldi said: "The sex/gender identification of individuals who come into contact with the police will be based on how they present or how they self-declare, which is consistent with the values of the organisation. Police Scotland requires no evidence or certification as proof of biological sex or gender identity other than a person's self-declaration, unless it is pertinent to any investigation with which they are linked."

There will now be rapes officially recorded as having been committed by women who have penises against women who do not. Women who are raped by persons with penises who claim to be women will have to state, by ordinance, that they were raped by a woman.

Crime statistics will become completely meaningless. An MP who spoke to The Times said that "this tops it all and is dangerous. It's physically impossible and is about dogma overriding common sense. Women prisoners are being harmed by this and vital crime statistics rendered useless."

In May 2020, new court rules in the UK instructed that a biological male who identifies as a female is to be referred to as a female, and by female pronouns, in court. This meant that women who are attacked, assaulted, raped, or harassed by male-bodied persons must refer to the persons with those male bodies as "she."

Barrister Allison Bailey spoke out against this at the time. Bailey has been bullied by trans activists for her stance that women are an entity unique from, and not inclusive of men.

This was as a result of the Equal Treatment Bench Book which contained "...a guide to different naming systems, and latest views on acceptable terminology." This created a situation in court where a woman, Maria McLachlan, 60, had to refer to her attacker, Tara Wolf, a 6-foot-tall biological male and trans activist who had attacked McLachlan at a protest, was forced by the judge in her case to refer to Wolf as "she."

In fact, though Wolf was convicted of assault, the Judge denied compensation to be awarded to McLachlan simply because she has referred to the male-bodied person who attacked her as a man. The judge said McLachlan showed "bad grace" by noting that the biological male who attacked her was biologically male.

Rowling has been a vocal opponent of laws, policies, and progressive language changes that alter the meaning of the word "woman" to include people who are male. For many who have been watching this unfold, it has been a complete and totally bizarre absurdity to find that police, judges, lawyers, politicians, academics, entertainers, authors, artists, and any other human could believe that biological sex is not only interchangeable, but that a woman is nothing more than two syllables and a costume.

There is only one kind of person that is capable of committing penetrative rape, because there is only one kind of person that has the tool required to undertake the act. That kind of person is a male. If a biological male who identifies as a woman and uses female pronouns commits a rape, their feelings as to their own desired gender should be entirely irrelevant. While gender ID is completely bogus and should not be the policy anywhere for any reason, even within those policies, committing rape should disentitle a biological male from being recognized as female under the law.

Rowling knows what all women know intrinsically: men are not women. And she's not afraid to say it. Police Scotland also know that men are not women, but they have chosen to lie on records, in court, and to victims themselves.