Joe Biden is being “taken down” by the same bogus standards that he introduced across America’s campuses, and we are being asked to feel sorry for him. 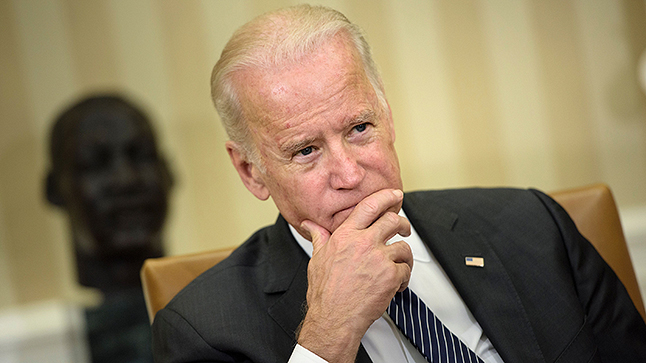 Joe Biden made the issue of sexual assault on campus his own. He forced a new interpretation of “Title IX” onto universities that required them to investigate and dole out unfair verdicts in sexual harassment and assault accusations. Unqualified bureaucrats took the place of police, lawyers, and judges, and as a result, a rash of false allegations were championed by victim advocates who had no understanding of the law or respect for due process. It’s been almost a decade of this appalling overreach. The lawsuits on behalf of these falsely accused young men and women are still working their way through the court system.

NowBiden is being “taken down” by the same bogus standards that he introduced across America’s campuses, and we are being asked to feel sorry for him. Not only did Biden advocate for consent across campuses, but he also advocated for “affirmative consent”—the exact standard he has violated over and over again in viral clip after viral clip of hair-smelling, handsy sleaziness. Countless young college students have been expelled and had their lives completely ruined for “unwanted touching” that was way more innocent than Biden’s.

Because of voices like Biden’s, the public has lost the ability to discern the difference between rape, ambiguous consent, or encounters that simply leave people feeling uncomfortable.

In the sex-panicked, puritanical culture that grew out of the 2011 “Dear Colleague” letter, what used to be minor grievances or embarrassing stories are now being championed as evidence of “toxic masculinity” or “rape culture.” The college students of that time have since graduated and taken influential positions in media and culture. They spent their college years being taught that social justice trumps due process. They were rewarded for expressing such preposterous opinions. Now they help to drive the conversation in the press and on social media.

Feeling uncomfortable is not abuse, and it’s embarrassing that we allowed such inane claims to permeate our culture. Questioning whether or not someone was too drunk to consent does not equal condoning rape. But thanks to Joe Biden we were told not to ask questions. We were told to disregard basic civil rights and decency in favour of blind belief.

This is the world he has wrought.

While schadenfreude can be fun, there is nothing amusing about the #believe, #rapeculture, #metoo environment that Biden helped create. Many who have fought against the undermining of due process are now being asked to help defend people like Biden when they fall victim to their own insane policies. But it’s not that easy.

Those who have struggled to draw attention to the very misfortune Biden is now facing should not forget how he contributed to his own downfall. They have a duty to hold him to that responsibility. While Biden may be feeling sorry for himself right now it doesn’t repair the past.

We don’t want an apology from Biden that caters to what he thinks the public wants to hear. Although if he did so I’m sure he’d say his perception was different than his accusers’. We want an apology for his lack of foresight. But, now that he’s accused, he’s not able to undo the mistakes of his past.

What if he’s innocent of any real misconduct? If Biden had cared about such things in the past, while he had the power to do so, it might play a part in our current consideration of his fate.

Those who have fought for due process will not take pleasure in watching Biden thrown under his own bus, but rushing to his aid should not be engaged in as an altruistic act. There is more at stake than Mr. Biden or any political party he represents. It is not acceptable for him to only start caring when it is his own reputation on the line.

It doesn’t matter what political party you represent if you don’t care about protecting innocent people against wrongful convictions. Clearly, Mr. Biden didn’t concern himself with this in the past, so why should he care now?

Politicians and lawyers shape our legal system. They are meant to do so with the public interest in mind. If Biden wants the benefit of the presumption of innocence, and he’s not getting it, then he has only himself to blame.

Maybe Joe Biden didn’t do what he’s accused of. Unfortunately for him, he didn’t care enough about protecting due process while he had the chance. Maybe politicians in the future will keep that in mind.

If Biden is counting on sympathizers for the falsely accused to defend him, well, he should have thought of that sooner. Hoaxsters were lifted up as folk heroes while the falsely accused, if they were lucky, received their justice in hushed tones. Many young people had their lives destroyed. Many young people took their own lives. And people like Biden, who are in the position to protect the rule of law, never seem to care about it until it’s too late.

Perhaps his presidential dreams are dashed, but his life should not be destroyed due to these allegations. But nor should the lives, education, and careers of those young men and women who were also denied due process. Perhaps men like Biden, who were quick to jump aboard the finger-pointing panic bandwagon when it suited them, will give more consideration to rule of law the next time they are presented with the choice of upholding due process or giving in to the justice of the mob.