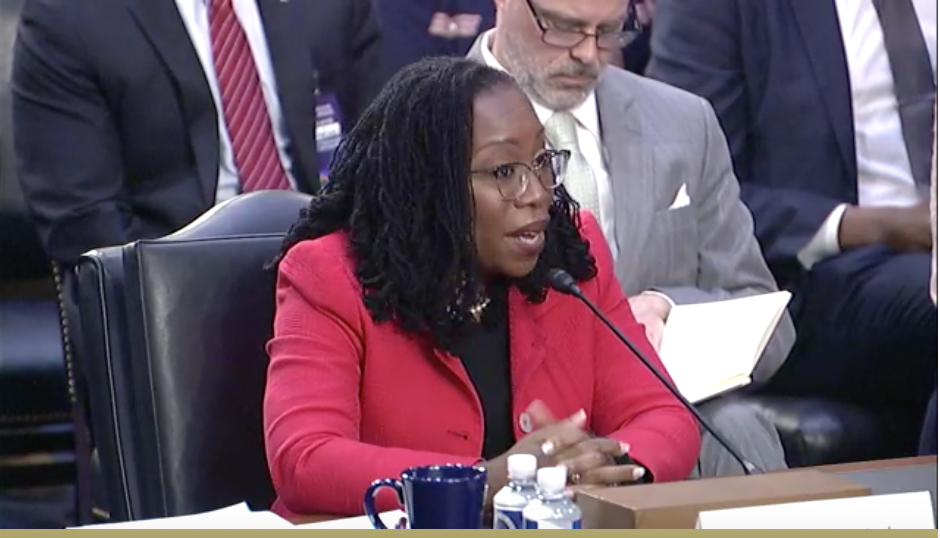 Judge Ketanji Brown Jackson, President Joe Biden's nominee to succeed Justice Stephen Breyer on the US Supreme Court, answered questions during the second day of confirmation hearings before the Senate.

Judiciary Committee Chair Dick Durbin opened the day by addressing some of the major concerns of the committee, such as her judicial philosophy, views on expanding the court, and her record on giving lesser sentences to child pornographers than federal guidelines suggest.

Durbin asked Jackson about Senator Josh Hawley's concerns that Jackson had been soft on child pornographers.

"As a mother and the judge who has had to deal with these cases," Jackson said, "I was thinking that nothing could be further from the truth," she said as regards Hawley's worry that her sentencing for child pornographers was too short.

"These are some of the most difficult cases that a judge has to deal with. Because we're talking about pictures of sex abuse of children. We're talking about graphic descriptions, that judges have to read and consider when they decide how to sentence in these cases.

"And there's a statute that tells judges what they're supposed to do. Congress has decided what it is that a judge has to do in this and any other case when they sentence and that statute doesn't say look only at the guidelines and stop.

"The statute doesn't say impose about the highest possible penalty for this sickening and egregious crime. The statute says calculate the guidelines, but also look at various aspects of this offense and impose a sentence that is 'sufficient, but not greater than necessary to promote the purposes of punishment.'

"And in every case, when I am dealing with something like this, it is important to me to make sure that the children's perspective, the children's voices are represented in my sentences. And what that means is that for every defendant who comes before me and who suggests, as they often do, that they're just a 'looker,' that these crimes don't really matter, they've collected these things on the internet and it's fine. I tell them about the victim statements that have come in to me as a judge.

"I tell them about the adults who were former child sex abuse victims who tell me that they will never have a normal adult relationship because of this abuse. I tell them about the ones who say 'I went into prostitution I fell into drugs because I was trying to suppress the hurt that was done to me as an infant.'

"And the one that was the most telling to me, that I describe at almost every one of these sentencings, when I look in the eyes of a defendant who is weeping because I'm giving him a significant sentence. What I say to him is 'do you know that there is someone who has written to me and who has told me that she has developed agoraphobia, she cannot leave her house because she thinks that everyone she meets will have seen her ... pictures on the internet. They're out there forever, at the most vulnerable time of her life. And so she's paralyzed.

"These people are looking at 20, 30, 40 years of supervision. They can't use their computers in a normal way for decades. I am imposing all of those constraints because I understand how significant, how damaging, how horrible this crime is."

Hawley brought up during Monday's hearing the numerous cases in which Jackson had issued sentences to child pornographers that were substantially lesser than those suggested by federal guidelines.