KARI LAKE: 'Doug Ducey and Mike Pence are the laughing stock of politics'

"It is MAGA versus the swamp," Lake said. "And I think we know what side the American people are on." 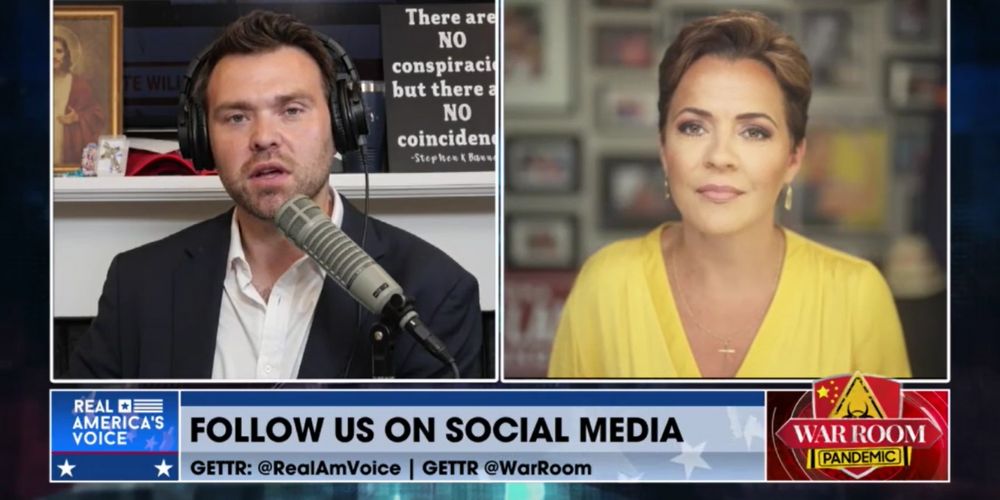 "It is MAGA versus the swamp," Lake said. "And I think we know what side the American people are on."

Lake continued, "The swamp creatures are taking their last gasp of breath and trying to hold on for dear life, but they're gonna get flushed away in this election… we're seeing it."

She added, "they're thinking that rolling out somebody like Doug Ducey or Mike Pence will do the job. I mean, these guys are the laughing stock, frankly, of politics right now. The people have turned on them because they turned on the people, and my opponent has never been even close to catching up with us in the polls."

Lake said of her opponent’s recent polling which was highlighted by the media, "They're trying to act like she's tightening her stance with us and getting close to us. But all of our internal polling shows were up 11, 12, 13, all over the state, even in areas that are a little bit ‘swampier’ that maybe you'd think she would be doing better. She still can't pull ahead and can't even come close to us."

Posobiec brought up the upcoming rally for Lake in Arizona featuring former President Trump which had been delayed due to the untimely death of Ivana Trump to which Lake replied, "I think it's actually good that it was delayed because since it was delayed, we've had these two swamp creatures come out and get behind my RINO opponents. So, it's just gonna up the game and it's gonna make it even more exciting."

Lake then referenced former UN Ambassador Nikki Haley’s comments that Trump’s time had come and gone saying, "No, it's just the opposite."

"That's the narrative that my RINO opponent is trying to push out there. And it's not the reality on the ground. This is a very patriotic state. This is a state that remembers the patriots in this state are the ones that stood up on November 4th, the day after that botched stolen election," she continued.

Lake added, "They worked and worked and worked and they rallied, and they protested until they got a forensic audit. So, we're really the state that got it all going. And now we're seeing how widespread the corruption is. So, this is a very pro-Trump state. Remember we had that 96-mile Trump train that started organically before that last election. And people still love President Trump here because he loves America and frankly, Jack, his policies work."

"And whether you loved President Trump, like the majority of people, or even if you didn't, you have to admit looking back three, four years ago, your life was so much better under the America first policies," Lake continued. "And that's simply what we're going to do here in Arizona. I'm going to bring America-first policies to Arizona. We're going to secure the border, like it was secure with President Trump, maybe even more secure. And we are going to bring some common-sense policies to Arizona and for once and for all push back on the McCain machine, which is still kind of running in this state, although it's really on its last gasp and we're going to bring back a government of 'we the people.'"

Posobiec pivoted to border security and referenced the recent revelations that the police response at Robb Elementary School, the site of the recent mass shooting in Uvalde, Texas was not deemed urgent when they got a lockdown order, was because that school had been locked down 47 times previously that year including the day before the shooting in response to issues involving illegal migration.

Lake responded that the problems are "not just on our border. It's starting to move northward into our cities as well."

"We've got murder rates, spiking to the highest they've ever been. It's lawlessness here in Arizona and in Texas as well."

Lake added that on day one she would invoke "article one section 10 powers, which is basically the ability to protect the border and to secure the border."

"We declare an invasion in Arizona, we have an invasion in this country like we've never seen before in our homeland, and it takes one strong governor to stand up and do the right. We're gonna do that on day one, we're going to resume constructing President Trump's wall and we're gonna immediately get boots on the ground."

"Arizona National Guard will ask sheriffs to help as well and all law enforcement to help out," she continued. "And when we catch somebody coming across, they're heading right back the other way. We're not gonna take them in. We're not gonna give them shelter. We're herding them back across the border and we're gonna play hardball with Mexico, just like President Trump did."

After discussing cutting the flow of illegal drugs across the border Posobiec asked, "It seems to me like you're talking about finishing the Trump agenda and yet I hear Vice President Pence seems like he's against that for some reason. Why is that?"

Lake replied, "They thought they defeated President Trump in that last election, but the patriotic people of America and Arizona said, 'nah, not so fast. We're gonna dig to the bottom of that and find out what was behind that.'"

"And it turns out it was a corrupt election and we caught them and we will seek justice someday. And they're nervous about me because of that. They've been found out. They've been figured out and they're gonna try it again, but they're painted into a corner because when they try to cheat again, they're going to get caught.