On Wednesday, Lake tweeted an article noting that Richer ran an "anti-Kari Lake PAC,’ and that "all expenditures from Richer were spent telling Arizonans not to vote for Lake." She called on the state’s Attorney General Mark Brnovich to investigate. 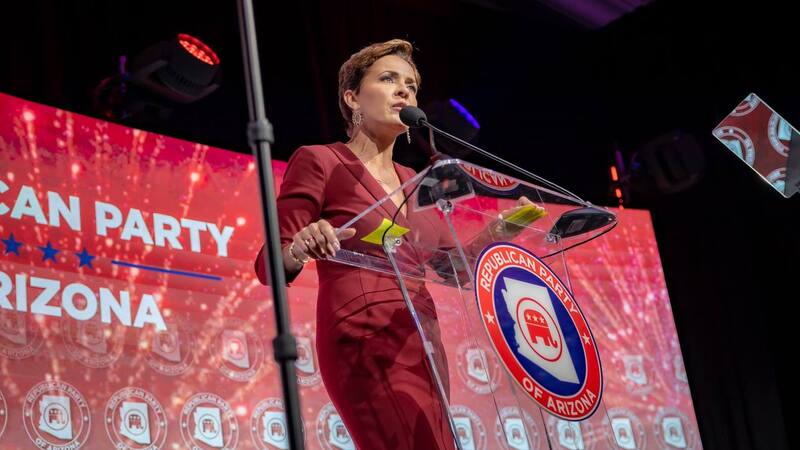 Arizona GOP gubernatorial candidate Kari Lake has filed a lawsuit against Maricopa County, alleging that the county broke elections laws during November’s midterms, and demanding that they provide records related to these Election Day failings.

The lawsuit, filed on Wednesday, states that Maricopa County experienced printer and tabulation issues. These issues began early on Election Day, and the filing alleges that at least 118 polling centers, or 53 percent of the 223 total centers, were affected by these issues.

This is more than what Maricopa County officials stated, with around one-third, or 70 of the 223 centers, being affected, they said.

These ballots were "not printed darkly enough for the County’s vote tabulation machines to read the ballots," thus resulting in many ballots being rejected.

"The Defendants failed to detect, prevent or timely remedy this problem during setup and testing of their polling stations," the lawsuit states. "Although poll workers tested the printers, according to observers they did not test whether the tabulators could read the test print."

After listing off the locations that experienced issues, the lawsuit stated that "because of printer/tabulation problems, the polling locations were chaotic, voters were frustrated, and voters had to endure long lines."

The lawsuit states that poll workers attempted to reach the county hotline, but were not able to reach a tech person in a timely fashion. "Even when technical support was reached, poll workers were told that they did not know how to fix the problem."

In response to the issues, poll workers in many cases told voters to go to a different location, but "many voters left without voting."

The lawsuit noted "door #3," a box where voters could put their ballot to be tabulated later at a central location. "Things were so chaotic that poll workers were unable to watch the voters feed their ballots through the tabulator. Poll workers were pulled in so many different directions that one poll worker did not have the time to mark 'spoiled' on original ballots."

"This problem with the printer/tabulator never needed to occur because as early as November 2, 2022, a manager at MCTEC discovered that some of the printers were printing faded timing marks and the tabulators were not able to read those ballots."

The lawsuit also alleged that there were "problems ensuring every legal ballot is counted," noting a mix of counted and uncounted ballots in a container at the end of Election Day.

"Many poll observers saw poll workers mix counted and uncounted ballots in the same container at the end of the night," the lawsuit states.

Citing the 2019 Elections Procedures Manual, it states that the election board must conduct an audit to ensure that the number of signed-in voters matches the number of ballots cast.

"However, when asked on Election night, many poll workers were unable to provide the observers with the number of voters who signed in on the signature roster or e-pollbook and therefore could not determine if those numbers matched the number of ballots cast," the lawsuit states.

The lawsuit alleges that the defendants violated A.R.S. § 16-602, which related to the removal of ballots from ballot boxes, and that the defendants "have further compounded this problem by refusing to respond to Plaintiff’s Public Records Request."

"In addition, based upon information and belief, Palm Ridge Recreational Center had over two bags of ballots that had been dropped off in Door #3 after tabulators failed to count their ballots. However, the County claims that there were only eighteen Door #3 ballots attributable to this polling center."

The lawsuit notes that an initial records request was made on November 15. These requests were made for "all public records rated to voters" who had checked in to a voting center on Election Day, also submitted a mail-in ballot that day, and whose ballots were not counted.

The request was also made for records related to voters whose drop-off ballots were rejected due to the voter submitting another ballot that day.

An additional 9 public records requests were made on that day relating to malfunctioning ballots, voters, and other election topics. Elections officials in Maricopa County have yet to fulfill these requests.

On November 16, another records request was made by the Lake’s team for an additional set of information regarding communications between officials on elections day regarding the malfunctions and the reticulation of votes.

The defendants have yet to respond to the second request.

"Public record requests must be fulfilled 'promptly,'" the lawsuit noted.

The plaintiffs motioned for the defendants to produce these records before canvasing begins on November 28.

The lawsuit also noted that Maricopa County officials responded to the Arizona Attorney General within days of a letter being sent about the election issues, but that they have yet to respond to the public records requests.

On Wednesday, Lake tweeted an article noting that Richer ran an "anti-Kari Lake PAC,’ and that "all expenditures from Richer were spent telling Arizonans not to vote for Lake."


She called on the state’s Attorney General Mark Brnovich to investigate.

Richer and Gates started a political action committee in 2021 to stop MAGA candidates in the election. The PAC is called Pro-Democracy Republicans of Arizona.

The PAC, according to the Arizona Sun Times, has received money from Francis Najaf, who reportedly donates almost exclusively to democrats. He gave the PAC $20,000, also giving $60,000 to the Arizona Democratic Party and $5,300 to Democrat gubernatorial candidate Katie Hobbs.

The PAC gave money to another PAC during the primary called Defending Arizona Values, run by the moderate GOP consulting group Camelback Strategies, which gave very little to actual candidates. Much of Richers PAC money went to expenses like airfare, food, and other "operating expenses," instead of candidates.

"The Attorney General’s laid out multiple violations of the law – numerous, in fact. Recorder Richer created a political action committee specifically to oppose candidate that were on the ballot in the election that he was tasked with overseeing. There is clearly misconduct – 16-672 in Arizona Revised statutes is one area that we are looking into to hold these guys accountable," he said. "But conflicts of interest is another area we’re looking into."

"And if they won’t resign, we will do everything in our power to hold them accountable, come this new legislative session."