The former believer in wide-ranging pandemic restrictions now believes "an effective public-health response depends on knowing when to end a state of emergency." 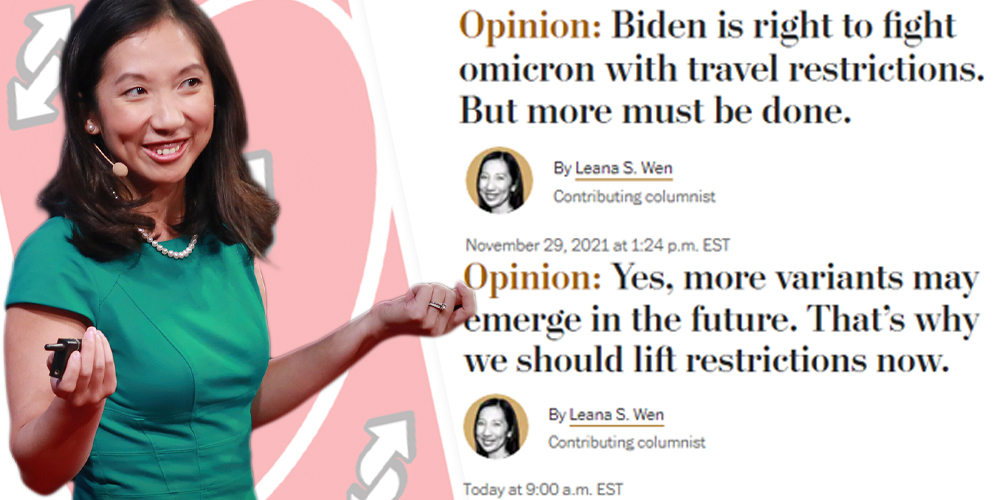 CNN contributor Leana Wen on Tuesday published a piece saying America needs to get back to normal now that the Omicron variant is on the way out. This stands in contrast to the message Wen wrote late last year urging the Biden administration to enact heavy pandemic restrictions.

While both of her write-ups talk about lingering threats on the horizon, the difference now is Wen wants the public to not be afraid of COVID-19 anymore.

In a pair of dueling Washington Post op-eds, Wen reverses course on COVID-19 rules. In November 2021, Wen penned the prior piece by leaning heavily on the Omicron variant being an unknown threat at that time.

She believed Americans coming home from places like Africa needed mandatory stays in quarantine facilities to self-isolate. Her proposed solution was a regime of extensive testing and masking. "The Biden administration was right to take the dramatic and difficult step of re-instituting travel restrictions, and administration officials need to do even more" was Wen's main idea back in the fall.

But now in February 2022, Wen switches to appealing to public demand. From favoring restrictive measures, she now believes that "new and possibly dangerous variants are likely to emerge. But it is precisely because of this future threat that we need to allow normalcy now." Unable to let go completely of fearing the unknown, Leana says "rapid removal" of COVID-19 restrictions must occur when hospitalization rates are on the decline.

Once a staunch advocate of protective gear and equipment, the CNN contributor now describes masks as a bygone relic that's making Americans upset.

The point of consistency for Wen is her push for vaccine requirements. But now she thinks "it's not fair" to place restrictions on vaccinated people whatsoever.

Her overall train of thought lines with her earlier beliefs about segregating society on this basis that she espoused throughout 2021.

It's also in line with establishment Democrats across the nation shifting the COVID-19 narrative in order to save their careers in the eyes of the general public, amid doubts about their midterm election prospects.

But that won't work to favor voters.

According to The New York Times, a poll now says less than half of Americans approve of how the Biden administration is handling the pandemic now. That's a decline from a 66 percent approval total in July of last year.

The pivot on pandemic messaging is evident. A recent January 2022 study by Johns Hopkins University concluded that lockdowns had "no public health" impact, but they did cause severe economic and social disruption.