Left-wing activists took to the streets of Portland Friday night—just as they’ve done every night for the past two months—to protest in front of the Mark O. Hatfield Courthouse, and burned bibles and American flags. 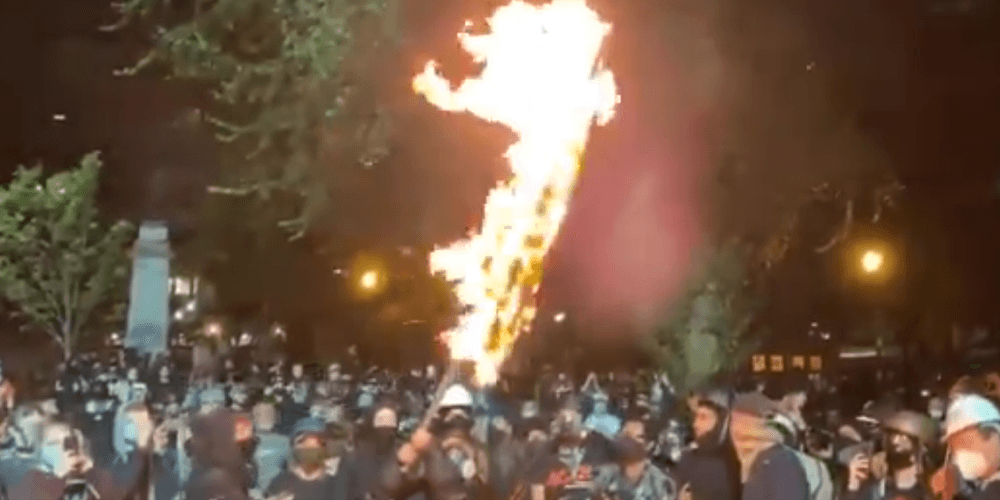 Left-wing activists took to the streets of Portland Friday night—just as they’ve done every night for the past two months—to protest in front of the Mark O. Hatfield Courthouse, and burned bibles and American flags.

Towards midnight, the activists built a large bonfire made up of assorted refuse and wooden panels stolen from shuttered businesses in the neighborhood. The rioters burned American flags and a stack of bibles.

According to journalists on the ground, Antifa and Black Lives Matter activists made numerous attempts to provoke a response from federal law enforcement officers stationed inside the courthouse.

At one point, rioters violently battered the garage door of the courthouse with a makeshift battering ram. They also set fire to garbage at the exit, forcing federal officers to clear the debris.

Rioting was less intense than nights earlier in the week due to reduced turnout. “Federal and state officers located inside the courthouse were not forced to leave the building during the course of the night,” said the Department of Homeland Security regarding the riot on Thursday.

Nonetheless, violence persisted throughout the night as rioters set fires on sidewalks and attempted to break into businesses near the federal courthouse by stripping down the wooden barriers.

“Rioters at gathering in Portland are tearing off barricades of an arcade nearby federal courthouse. Portland Police are aware but will let them continue because they’re given directive to leave rioters alone in most circumstances,” reported The Post Millennial’s Andy Ngo. “Black bloc militants in downtown Portland are trying to break into a business near the federal courthouse at the peaceful protest. They’re prying off the wood that is covering glass window.”

The Department of Homeland Security says it will not vacate the courthouse, nor Portland, due to the ongoing violence. Acting Secretary Chad Wolf stated that the plan is to remain in place until the federal government is assured that all violent activity stops.

“That plan includes a robust presence of Oregon State Police in downtown Portland,” Wolf said in a statement. “State and local law enforcement will begin securing properties and streets, especially those surrounding federal properties, that have been under nightly attack for the past two months.  Oregon State Police will coordinate with Federal Protective Service (FPS) officers to ensure all federal facilities remain protected and secure.”

“This plan is possible due to the valiant efforts of the DHS law enforcement officers protecting federal property in Portland from violent activity for the past two months,” he added. “The Department will continue to maintain our current, augmented federal law enforcement personnel in Portland until we are assured that the Hatfield Federal Courthouse and other federal properties will no longer be attacked and that the seat of justice in Portland will remain secure.  This has been our mission and objective since the violent, criminal activity began.”