Like many who don't know how to properly defend their views, Reilly suggests that violence may be necessary to force your views onto others. 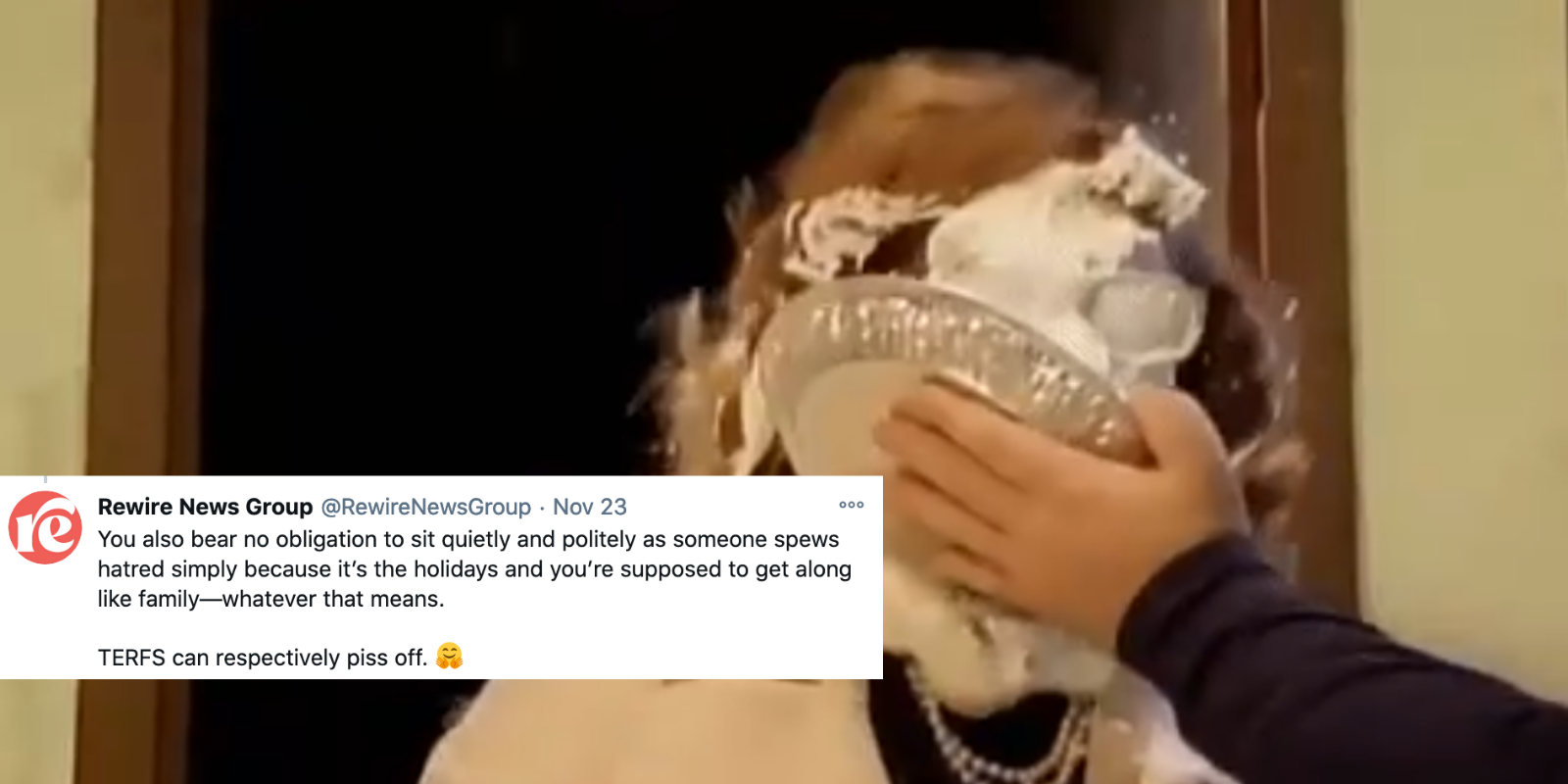 Caroline Reilly, legal fellow with Rewire News Group, wants you to know that the best way to deal with relatives you don't agree with this Thanksgiving is to assault them. Reilly's aggression is aimed at those gender critical relatives who don't believe men are women, no matter how much lipstick they put on, and don't believe women are men, even if they cut their breasts off, stamp their feet, and say that they are.

In calling for this outright aggression, Reilly is a bit tongue-in-cheek, but her message is clear: if you don't agree with someone, don't engage in reasonable discourse, chuck a turkey at them, mock them, and hate them.

Reilly asks "Is there a TERF at your Thanksgiving gathering?" She writes "...we hope you're able to safely enjoy the holiday away from toxic relatives, but we also know that might not be possible. Toxic relatives come in many forms: the Trump supporter, the devil’s advocate, the COVID-19 denier. There’s also the TERF: the trans-exclusionary radical feminist."

She claims that anyone who believes that human beings cannot change sex is a bigot, a transphobe. "But make no mistake," Reilly writes. "A TERF is a TERF is a TERF—whether they’re transparent about their motives and bigotry, or whether they’re stoking fears about violence and discrimination to make their overt hatred for trans people seem well intentioned. It is not."

It doesn't matter to Reilly that a person could have very good reasons for opposing trans ideology, such as not believing that children's healthy bodies should be subjected to life-altering, sterilizing medication and drastic, mutilating surgical treatment. For Reilly, a person who opposes a 14-year-old's wish to remove her breasts and destroy her reproductive system is and always will be a bigot, worthy of assault by turkey, or perhaps pie.

And if you don't like someone's views, and don't know how to engage wit them, Reilly has another suggestion: ignore them, or even better, mock them mercilessly. By labeling someone a TERF, Reilly makes it easy to categorize someone and hate them without investigating their ideas. And certainly why would they investigate yours if what you've done is label and mock them?

Reilly's argument against those who oppose trans ideology centers around bathrooms, with the mantra "pee in peace." Reilly explains that there's only one way to think about trans ideology, and that it can't be questioned. She delivers rote talking points that a person can use to shut down arguments, without even entertaining the idea that there could be other factors at play, specifically for minors who have not yet become adults.

She demands that you tell your relatives to take your words at face value, without question, comparing "gender-affirming care," which often involves mastectomies even without a risk of breast cancer, removing muscles from forearms, leaving those arms debilitated, castration, and other drastic forms of surgery, to preventative procedures such as colonoscopies. A colonoscopy is to detect colon cancer. Castration is done to ameliorate a person's feelings that they wish their body were differently made.

Like many who don't know how to properly defend their views, Reilly suggests that violence may be necessary to force your views onto others. This way, even if they don't agree with you, they'll be too afraid to say otherwise.

So this Thanksgiving, perhaps everyone should eat in silence, and not bring up any topics about which anyone may disagree. But there's every chance that, as so many of us sit alone and Zoom our Thanksgiving grace with relatives we might rather not see anyway, we won't need to remember to keep quiet, we can just mute our mics, turn off our cameras, and live without our own bubbles, where no one will question us, challenge us, or invite us into debate.