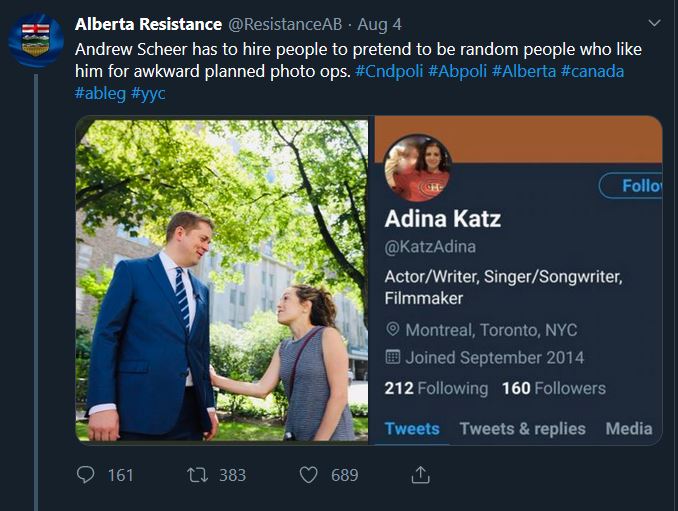 Update: the tweets have since been removed after the account in question issued an apology for the false information.

The tweets, which originate from the Twitter account “Alberta Resistance” (@ResistanceAB) spread disinformation that a cancer survivor appearing in one of Scheer’s photos is a paid Canadian actress and that another man shaking the opposition leader’s hand is her brother.

The Twitter account in question also has the website AlbertaResistance.com listed in its bio, however, a quick check found that the URL was never registered before at the time.

In total, the tweets received over 1000 likes and had been retweeted nearly 600 times.

However, both Adina and Avi Katz, who Alberta Resistance identified as the paid actors in the photo have denied the claims calling them lies.

HOW DARE YOU?!! Yes, I am an actor, but I am not the person in this picture with Scheer and you know it. What is wrong with all of you, so easily eating this up? Do your research… or simply compare the pics lol before spreading lies. I am reporting you.— Adina Katz (@KatzAdina) August 5, 2019

Does this look like the same person to you?? Just compare their noses, to start. I’ve reported your tweets. That is not us in the photos. Remove the tweets immediately. It is harassment. We have nothing to do with this. pic.twitter.com/lQ3Y1REKOE— Avi Katz (@TheKatzino) August 5, 2019

The Post Millennial reached out to both Adina and Avi but had not heard back by the time of publication.

“Alberta Resistance” was registered on April 2019. Since being created, a majority of the tweets by the account specifically target provincial and federal Conservatives, while praising Justin Trudeau and former NDP Premier of Alberta Rachel Notley.

In one tweet, on May 20, 2019, the owner of the account announced that they officially registered for the Liberal Party.

The account also shared several posts by a prominent Edmonton Antifa group and posted comments about the need to “reject capitalism.”

Several prominent accounts spread the disinformation, including former Liberal MP Marlene Jennings, the husband of Katie Telford, Rob Silver and prominent radio host Charles Adler. Both Jennings and Silver have since apologized for participating in the fake claim’s spread.

Dear Ms Katz, as one who retweeted those that speculated you might be the woman in Scheer’s ad due to resemblance, I apologize to you without reservation.— Hon. Marlene Jennings (@marlenejennings) August 5, 2019

“Misinformation can be spread easily these days and therefore I sincerely apologize for playing a role and contributing to that process,” claimed the Twitter account.

The tweets have since been removed by the user in question.