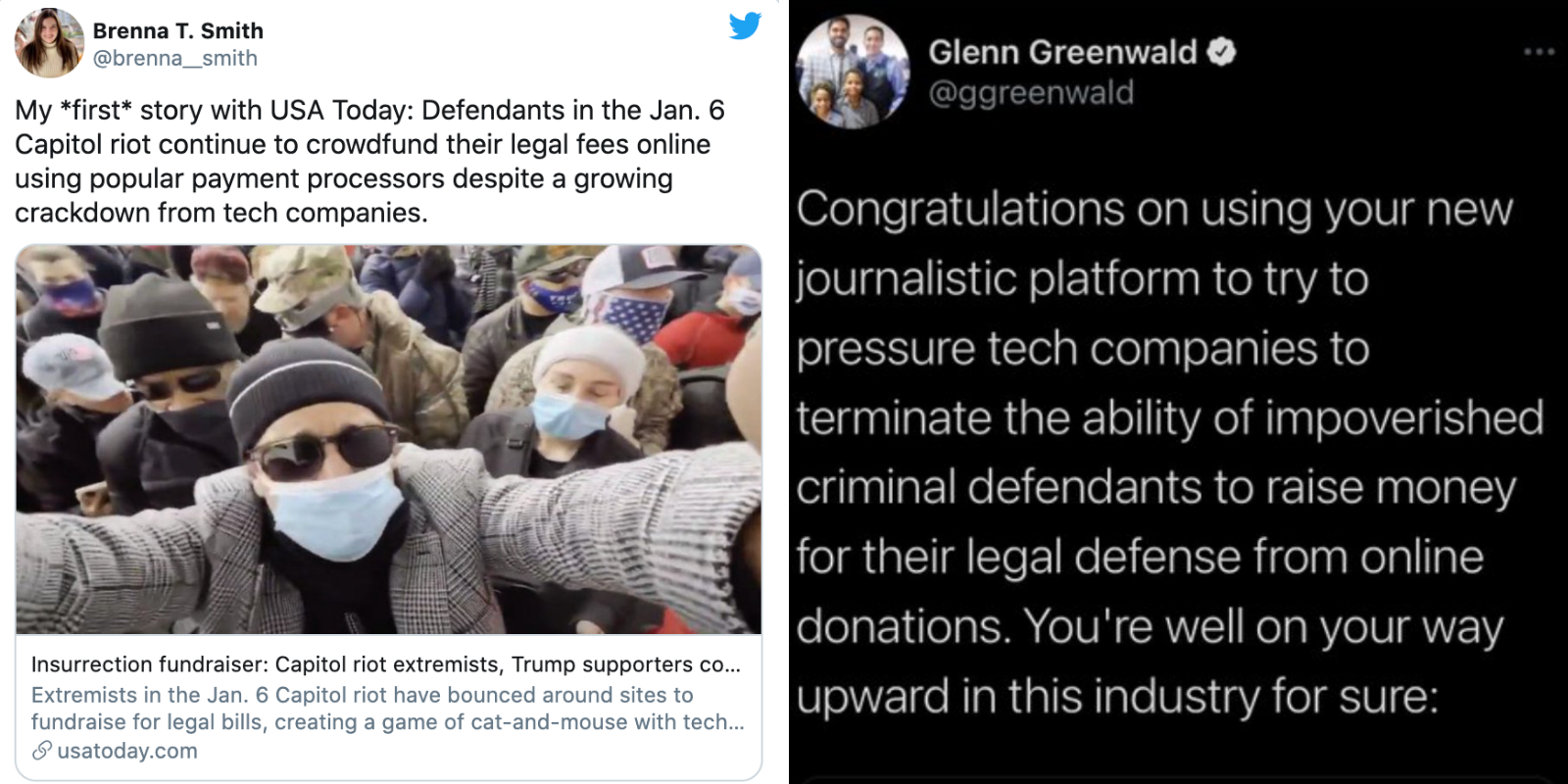 An article in USA Today calling for censorship received intensive backlash. That backlash was then framed as morally wrong. The writer of the article was a young woman, and her status as a young woman was used to sketch those who attacked the article as misogynistic haters.

So what happened? A young writer wrote her first story in USA Today, with her very own byline, and was not even remotely prepared for the level of pushback she got as to her claims. Brenna T. Smith was the lead writer on a story about how those who took part in the Capitol riot on Jan. 6 are using crowdfunding sites to fund their legal defenses. For Glenn Greenwald and Jack Posobiec, Smith's assertion that those charged with crimes are unworthy of defense struck a chord.

Smith wrote that those charged in the Capitol riot are able to fundraise for legal fees "despite a growing crackdown from tech companies." The article details the stories of defendants who are trying to find the funds for their defense, and tracks through the various sites that are being used. Smith and her colleagues sort through the crowdfunding sites that have been used, and the amounts that have been raised, and the overall tone is that these sites should not allow fundraising to happen on behalf of these defendants, who under law, are innocent until proven guilty.

After lambasting the story on Twitter, journalist Glenn Greenwald took to his Substack to blast the story for its assumptions that those who are accused are not deserving of a defense. Greenwald wrote that "...the only purpose of the article — headlined: 'Insurrection fundraiser: Capitol riot extremists, Trump supporters raise money for lawyer bills online'—was to pressure and shame tech companies to do more to block these criminal defendants from being able to raise funds for their legal fees, and to tattle to tech companies by showing them what techniques these indigent defendants are using to raise money online."

Posobiec pointed out this is par for the course for activist journalists.

The USA Today story links the defendants from Jan. 6 to hate groups, with no evidence, or anything other than the authors' own suppositions. "For years, hate groups used mainstream technology platforms to organize, spread their message, recruit members and raise money. Time and again, the platforms largely resisted calls to cut off these groups, arguing these tools should be available to anyone as long as they were not engaged in illegal activities."

Greenwald writes: "The USA Today reporters went far beyond merely reporting how this fundraising was being conducted. They went so far as to tattle to PayPal and other funding sites on two of those defendants, Joe Biggs and Dominic Pezzola, and then boasted of their success in having their accounts terminated."

Greenwald, for his efforts at pointing out the activist practices of the authors, was subjected to a round of social media vitriol. Author Robert Evans said that Greenwald was only defending the defendants' right to raise money for their own legal defense because he "dislikes" Smith et. al.

Writer Noah Berlatsky said that Greenwald's defense of due process was akin to defending a "fascist insurrection."

USA Today swooped into Smith's rescue, saying that their "intern," Smith, received "vitriol." Brett Murphy basically wrote that it was unfair that Smith got this kind of pushback seeing as she's just an intern and this was her first story. But the claims in the article, and the activist framing of it, were designed to prevent those who met charges stemming from their alleged involvement in the Capitol riot from funding their defense.

Greenwald was one of those who adamantly defended the rights of defendants to raise money for their own defense, and their rights as maintaining the status of innocence until guilt had been proven. But instead, he was accused of trying to "effectively incite a mob against a journalistic intern."

Oz Katerji, who lists himself as a freelance journalist and filmmaker, then said that "the people involved tried to overthrow democracy and murdered a police officer."

However, there have been no charges of sedition filed against the Jan. 6 defendants, because there has been no evidence of sedition obtained. Additionally, no one is charged with murder of a police officer. The closest charge to that is assault. Two men were charged with assault of Officer Brian D. Sicknick, and the weapon they are accused of using is bear spray. There have been charges of "impeding Congress".

Greenwald points out that one thing those charged in the Capitol riot do have in common is that they are primarily broke. But for journalists at USA Today, even first-time byliners who are super proud to get their name out there, the status of those who are accused is that they are guilty, not worthy of defending, and should be banned from using the tech tools that are available to the rest of the population.

This, and not Smith's hurt feelings, are the point. But for leftists in journalism, nothing is more important than a supposed victim's hurt feelings.