At the Trans Pride protest in London last weekend, a placard was placed on a war memorial in central London calling for the killing of JK Rowling. 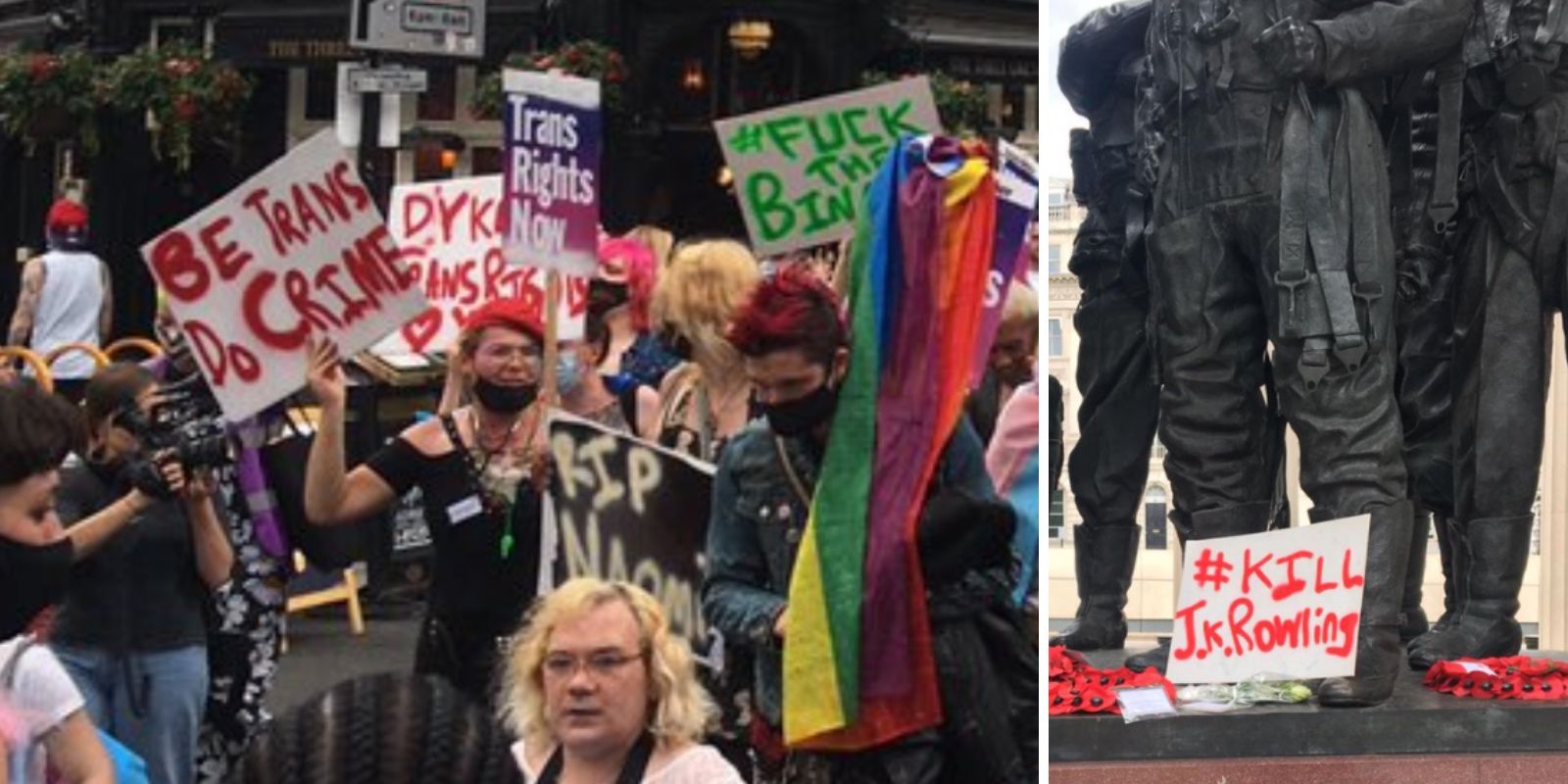 Once, Pride marches were peaceful gatherings where lesbians, gays and bisexual people could celebrate their forebears who won their civil rights. However, in recent years there has been a shift as the "T" has come to dominate the movement.

Some lesbian women, and increasing numbers of "gender critical" gay men, are staying away, or protesting against Pride, because they no longer wish to be associated with the excesses of the extremist trans rights movement.

At the Trans Pride protest in London last weekend, a placard was placed on a war memorial in central London calling for the killing of JK Rowling. The following image was taken at Bomber Command Memorial in Green Park, near Piccadilly.

Signs which looked as though they were made by the same hand appeared elsewhere at the protest. Another read #BeTransDoCrimes.

The striking red hand-painted signs were photographed at Trans Pride with speaker and self-proclaimed graffiti artist "Sarah Jane" Baker, who also posted the #KillJKRowling hashtag on social media. Baker has made a short documentary entitled "Be Trans, Do Crime."

Baker, 51, is a violent criminal who was incarcerated for kidnapping and torturing his step-mother's brother, and for attempting to kill a fellow prisoner during that time.

It was reported in August 2013 that Baker was undergoing plastic surgery at HMP Elmley with a view to transferring to a women's prison. However, he was transferred to HMP Lewes, a men's prison, indicating that he did not meet the criteria for moving to the women's estate.

Baker was released from prison in 2019 after having served 30 years in the men's estate. He published a book about how men can gain transgender privileges in prison. "I cut my testicles off when I was in my prison cell. There was so much blood, I nearly died. But it meant the clinic had to give me oestrogen," Baker said.

Baker was also photographed at the event with his arm around high-profile trans activist media personality Munroe Bergdorf. Baker appeared to be one of the top speakers at the event.

Other protestors at Trans Pride London called for the death of the beloved children's author and philanthropist, JK Rowling, whose most recent public act was to donate the proceeds of sales of her Ickabog book to those worst affected by the Covid pandemic.

Other protesters called for the death of "terfs," which is a slur used to denigrate women who assert that sex is socially salient.

At the time of writing, no trans lobby organization, no trans activist, and no public figure associated with that cause has made a public statement condemning what looks like stochastic terrorism—the public demonization of a person or group resulting in the incitement of a violent act, which is statistically probable but whose specifics cannot be predicted.

In this instance, it is both JK Rowling herself—and by extension all women who assert that sex matters—that are being targeted for violence. Women cannot know when it will erupt, or who will be the victim, but the intentional atmosphere of hostility is palpable.

What has JK Rowling done to be targeted with such threats? She has merely expressed her views in the form of an essay, and some tweets, on the subject of women's need for single-sex spaces and for plain language in which to describe our reality.

"We're living through the most misogynistic period I've experienced," she wrote. "Back in the 80s, I imagined that my future daughters, should I have any, would have it far better than I ever did, but between the backlash against feminism and a porn-saturated online culture, I believe things have got significantly worse for girls.

"Never have I seen women denigrated and dehumanised to the extent they are now. From the leader of the free world's long history of sexual assault accusations and his proud boast of 'grabbing them by the pussy', to the incel ('involuntarily celibate') movement that rages against women who won't give them sex, to the trans activists who declare that TERFs need punching and re-educating, men across the political spectrum seem to agree: women are asking for trouble. Everywhere, women are being told to shut up and sit down, or else."

As the appeal in Maya Forstater's case made clear, women are technically free to articulate their opinions about transgender ideology, or sex denialism, the conduct of trans activists, and the failures of authority. We should be able to do so without fear of being subjected to violence and discrimination.

Earlier this month, a Scottish women's rights campaigner was arrested and charged with a hate crime for tying some suffragette-coloured ribbons to a fence and posting tweets. The contrast between how women are allowed to express their objections to legal changes which undermine their rights, and how men are allowed to incite potentially lethal violence against such women, could not be more stark.

Will law enforcement—and the institutions responsible for emboldening trans activists until they seemingly feel confident inciting the most serious crimes in plain sight—turn a blind eye?

Or are women's rights human rights after all?