Looting and rioting in downtown Chicago last night was rampant for at least five hours in that city before law enforcement was able to regain control. 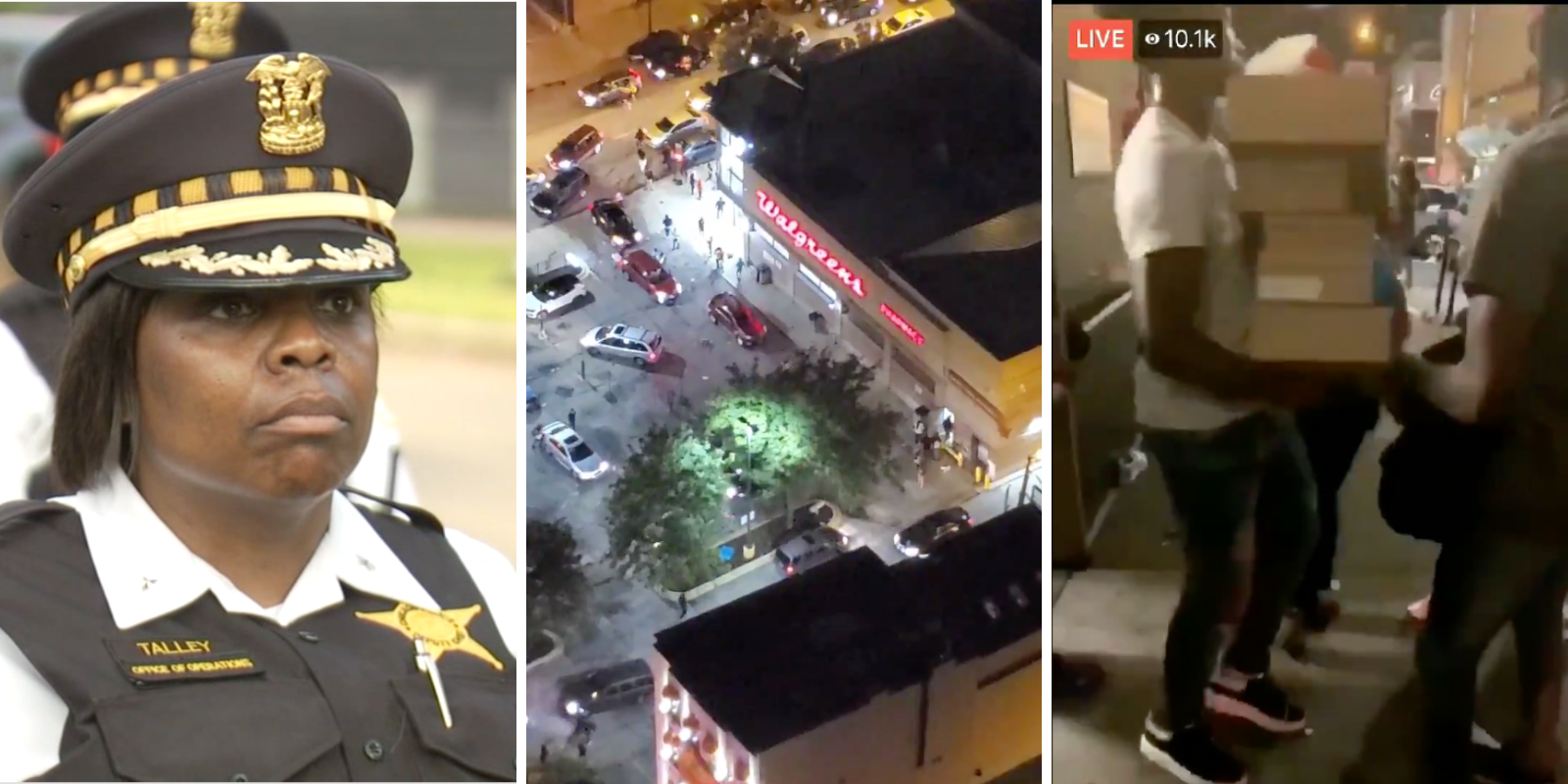 Looting and rioting in downtown Chicago last night was rampant for at least five hours in the city before law enforcement was able to regain control. This was allegedly in response to reports of a "police involved shooting" earlier in the day.

Reports from police scanners in Chicago began tweeting out the presence of looters at Saks Fifth Avenue and other upscale stores on the Magnificent Mile downtown at about 12:30 a.m.

Windows were smashed and looting was rampant, as rioters confronted police. Gun fire was exchanged between looters and police. By 4:30 a.m., the looting had been going on for nearly five hours, according to the Chicago Tribune.

Caravans full of people were reportedly seen dropping people off, increasing the size of the crowd. People could be seen carrying looted items, everything from shoes to televisions. Even a U-Haul moving van was observed. Some threw rocks at cop cars, and police report that many arrests were made.

Public transit was suspended, and Illinois state police shut down some off ramps from local highways. Draw bridges were lifted across the Chicago River, save for one that was designated for emergency vehicles.

A woman who was seen running with shopping bags was apprehended by police.

People were calm as they took their newly looted merchandise out of stores.

Livestream captured additional looting, people looking for each other within the crowd.

A Tesla dealership was broken into.

Gunfire was reported as well.

One industrious person used their car to break into a shop.

Additional reports were that "these kids [were] bugged out."

Reports were that the looting and rioting was instigated by the belief that the police had shot and killed a 15-year-old girl earlier that day. That appears to be misinformation.

A police involved shooting took place Sunday afternoon, about 2:30 p.m., August 9, near the 5700 block of S. Racine in Chicago. Deputy Chief Yolanda Talley, who spoke to press, said that police had been called to the scene due to reports of a man with a gun, and during a foot pursuit, the young man fired on police. Police responded with fire as well.

The man was taken into custody and on to the University of Chicago Hospital for treatment. A gun was recovered from the scene. Three officers who were involved in the shooting were also taken to the hospital at that time, though Talley said that was "for observation only," and that "they were not hit by gun fire."

Talley was asked by press on scene as to an incident that happened with police in the aftermath of that arrest. She said that "emotions were really high, it happened approximately an hour after the shooting. It happened while the crime scene was being processed. We were holding our line, if there was no crime scene, we wouldn't have been there."

In the hours after that, as police were investigating the crime scene, said that "one agitator" instigated "one big crowd" had gathered. An officer was injured by the crowd and taken to the hospital with a shoulder injury. Officers were maced, and the window of a police car was smashed with a brick.

A reporter asked Talley about an account of a man who had been shooting the scene on his cell phone, who claimed that police had taken that phone from him. When asked if she would address that, Talley responded "I will address that. He has his phone." There was no body cam footage shot.

"We made two arrests related to the crowd," she said.

When asked if there was anything she wanted to say to the community, Talley said "I think people should take a step back. We've been having a lot of protests, some things have been legitimate protests, and some things have not been legitimate. This right here is a direct response to one agitator being on the scene, getting people all worked up without having the full story.

"And the only thing we ask people to do is to listen. We want to hear what they have to say, we want to listen to them, but we want them to listen to us too. But right now, in this climate, everyone is feeling a certain type of way about the police. And it is really unfair to us. It really is."

Though Chicago Mayor Lori Lightfoot was quick to publicly shame citizens who partook in sunbathing over the weekend for their "reckless behaviour," Lightfoot has remained completely silent on the ongoing riots and sharp spike in crime throughout her city.

"It's called a pandemic, people," Lightfoot tweeted. "This reckless behavior on Montrose Beach is what will cause us to shut down the parks and lakefront. Don't make us take steps backwards."

Lightfoot, apparently, does not believe rioting or looting can cause the shutting down of parks and lakefronts.