"Reins are items of horse tack, used to direct a horse or other animal used for riding," per Wikipedia. 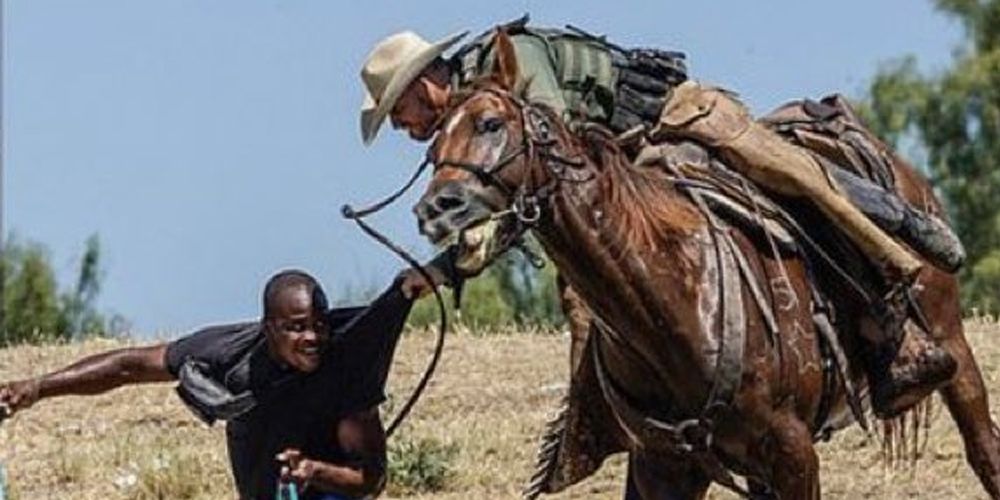 At the White House press breifing Monday, Biden press secretary Jen Psaki was left blindsided about the Haitian migrant situation that evolved over the weekend.

Thousands of the Haitian migrants have been hiding out under the International Bridge on the Texas border as of last week. Video at the southern border released Saturday shows hundreds of "unchecked" travelers crossing the Rio Grande into the United States with no authorities whatsoever in sight.

It was a situation that led the Biden administration to send more federal agents to the United States-Mexico border area in question to resolve.

But reporters who actually communicate with CBP can attest that this assertion isn't true at all. Julio Rosas of Townhall has spent a significant amount of time this past year covering the border crisis under the Biden administration.

Rosas' sources explained the situation: "Agents use their reins for a lot of reasons. Primarily it's used to steer the horse, but agents will also spin them sometimes to deter people from getting too close to the horse ...We are not aware of anyone being struck with the reins."

This in response to the notion that Border Patrol agents are purportedly "whipping" Haitian migrants.

In a follow-up statement, Rosas states outright that the claims are "not true because BP agents are not issued whips. And from what I've seen, it looks like an agent was using his rein to ward off people to prevent them from getting too close to the horse and from potentially getting stepped on by the horse."

A border agent told Peter Hasson of Fox News Digital: "We do not carry whips and the only thing I see in their hands is reins."

But the Biden White House didn't get the memo. As demonstrated by the responses made to this incident by White House press secretary Psaki.

A reporter asks: "There are photographs and reports of border agents on horseback using what appear to be whips on Haitian migrants. Does the administration view that as an appropriate tactic. Can you speak to that? There are people who are upset about it."

All Psaki could say is give reassurances that Vice President Kamala Harris is totally still "on it" when it comes to tackling the problem.

The viral tweet that perpetuated the "whipping" claim came from a staffer at Julian Castro's "People First Future" PAC.

Here's a list of people who don't know what horse reins are.

Yolanda Machado, "Critic at The Wrap:"

In conclusion, here's a listing for horse reins on Amazon, to help educate the general public as to how exactly a horse is controlled for navigational purposes.