McCain prevents the show from being an echo chamber. It’s a shame that her co-hosts were too entrenched in their personal views to let McCain do her job. 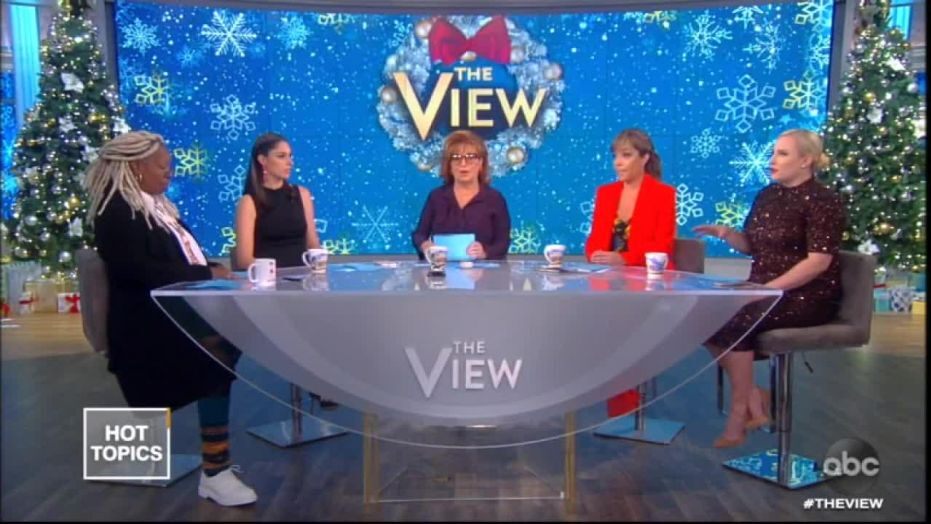 Impeachment was the talk of The View Monday morning, with Whoopi Goldberg, Sonny Hostin, Joy Behar, and Abby Huntsman all in favour of President Trump’s removal, with Meghan McCain the lone voice of opposition. When McCain voiced her view, Whoopi Goldberg told her basically to shut up.

The majority viewpoint among The View co-hosts is that Trump needs to go, and that those Republican Senators who have already said flat out that they would not vote to impeach are doing the country and due process a disservice in not weighing the evidence in as objective a manner is possible. McCain agrees with the latter point, but you’d never know it from the way her fellow co-hosts shut her down.

After Hostin spoke about the detrimental effect that would be had on democracy by some Republican Senators’ premature statements opposed to impeachment, McCain tried to throw in her view:

“My job here is not to litigate the ethics of it, I’m an ABC political analyst along with being a View co-host, my job is to analyze the politics of it. And I’m telling you, the politics—” She tried to say, before Hostin interrupted her.

McCain tried to continue “Let me finish, I let you talk, let me finish.”

But Goldberg wouldn’t have it and she spoke loudly over her. “Here’s what’s happening now, we’re gonna, we’re gonna–”

Undaunted, McCain tried to make her point. “Do you want to hear from the only conservative person that’s been on the show ever?”

Goldberg and McCain talked over each other from here on out, and McCain never gets to finish her point. Although this is what she might have said, had she been allowed to continue:

Goldberg clearly did not want to hear it. “Girl,” she said, “please stop talking right now, cause you know what?”

“Thank you, thank you,” Goldberg remarked.

“I won’t talk the rest of the show,” McCain promised.

McCain made good on her word and did not speak for the rest of the show. She let the segment on the Hallmark Channel’s pulling of wedding registry Zola’s lesbian wedding ads go, and only commented when directly addressed by Robert DeNiro. He asked her what the deal was with Trump’s hatred of Senator McCain, she said that Trump felt “emasculated” by her father. That was it. She didn’t say another word.

Regardless of whether the Democrats are right to seek impeachment, or if the Republicans are wrong for proclaiming their intentions to exonerate Trump prior to viewing the evidence, or if both or neither things are true, the fact of the matter is that the country is divided. While Democrats and their supporters are sure that Trump has committed unconscionable crimes, Republicans and their supporters are just as sure that he has not.

McCain’s voice on The View is the lone voice reflecting the reality that this impeachment is not getting masses of national support. It’s not a misclassification to say that national enthusiasm for impeachment is not as huge as the Democrats want it to be.

McCain was trying to point out that the partisan divisions are basically absurd, while Goldberg and the Democrats are pretty much irate. They can’t see just how many people disagree. McCain can offer that perspective to her audience, and to her co-hosts. Presumably, that’s why she’s there. She’s not there to be talked over, cut off, or prohibited from speaking for the bulk of the show.

There’s a huge discourse problem, where Democrats and Republicans find anything their opposition counterparts say or do to be entirely troubling and problematic. What McCain was trying to do was provide some insight that is otherwise lacking on The View. This is why she’s there, to prevent the show from being an echo chamber. It’s a shame that her co-hosts were too entrenched in their personal views to let McCain do her job.