Watching your child take impossible risks, put faith first, sacrifice for the greater good, is a sacrifice in itself. While Christ gives himself up, Mary must give her son. 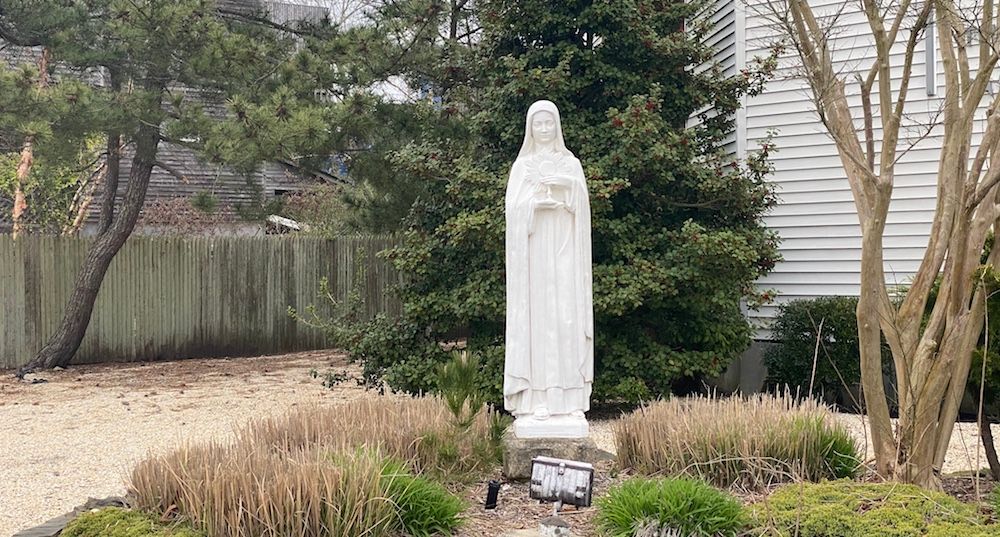 In the mornings right as the sun comes up, I take out my bike and ride to the lighthouse at the end of the island. There’s hardly anyone out at that time of day. Runners, maybe another cyclist or two. When we pass, we each hug the edge, keeping our distance from each other and the traffic.  Not that there’s much. There’s hardly any, actually.  Some lumber trucks, plumbing vans; construction is still essential in this shore town. About half way down the near empty Boulevard there’s a church. Mary stands outside.

I came to this church last summer with my son. A small white church, wind blown, sand scarred, it stands at the end of a short beach road. We came in part as an escape. I’d been teaching my son that church, going to mass, taking communion, didn’t have to be about following rules but could be more about quiet prayer. We arrived late and parked our bikes, we dashed inside out of the sun into the cool shadow. Most of the parishioners were in shorts. They turned to look when we came in, fumbling with our bike helmets, taking two seats on the aisle. Now of course this church is closed, like so many others.

I wish it wasn’t. I know we’re all supposed to stay inside, but I truly wish it wasn’t. It’s been over a month since I’ve been to mass, which in the course of my life isn’t actually that big of a stretch, but since I became a mother, and after that, since I got involved in my church community, a month is really quite a long absence. I think of Mary, the windblown white washed statue, her face of grace, no judgement.

After decades of near atheism I came back to the church as a means to provide for my son a basis for moral decision making. And it has. The stories of kindness, charity, and community have been essential guides. The story that teaches the most is the story of Easter, the lead up to it, the sacrifice of both Mary and her son.

In the Easter narrative we find these two stories, each with their own hero. There is the story of Christ, who takes on the greatest sacrifice he can in an attempt to save the world. His story could be a hero movie. A man is born with destiny. He grows up, unaware of what fate has in store for him. Only to realize that not only must he undertake his quest of his own free will, but that it is likely to end in death. When the worst comes to pass, he grieves it, wishes that he could avoid it, and in the end, accepts it, bearing the burden of his own sacrifice in order to save others.

No less remarkable is Mary’s story. Mary is perhaps even more hardcore in this narrative than her son. She bears a child through odd circumstances, and raises him in a blended family, knowing he is special, watching as he’s bullied and even a bit of an outcast from their community. She nurtures him, and as she guides him to manhood, she gets a sense of his quest, of this crazy mission that he’s on.

A mother knows what her kid is facing, and in lots of ways, as it turns out, that’s worse than facing it yourself. Watching your child take impossible risks, put faith first, give himself over to sacrifice for the greater good, is a great sacrifice in itself. While Christ gives himself up, Mary must give her son.

Riding my bike up this empty road I think of the world my child is facing, and these months without school. I was never worried about the climate crisis with regard to my son’s future, or any of the other various “world ending” scenarios common to our collective consciousness, those are perpetual and eternal.

While the coronavirus and it’s insanely contagious properties are scary enough, what is truly frightening is that the world it will leave behind will be devoid of so many of the things I was counting on. And I wonder too, as religious practices are squashed in the name of public safety, if it will make a comeback or go the direction it has been for some time, toward obscurity.

Religion has been on the decline for decades. Less people were practicing organized faith before the pandemic, and now with restrictions on community gatherings, and the vitriol against pastors and congregations that refuse to comply, it remains to be seen if the communal practice of our faith will be gone for good.

One thing I know for sure is that as I cycle near daily past Mary, her offer of sacrifice, her open heart, I feel drawn to her and her story. These are the reasons I came back to faith. First as children and then as parents, we experience both of these narratives in our lives. First we give of ourselves, because we must, and then we watch as those we love must do the same thing, ride the same road, despite its difficulty. I ride against the wind and want to be part of the congregation.