The searing speech was in response to a post from the school board which invited local families to "Boo Bash: The Queerest Free Halloween Party for Youth and Families" which is sponsored by a San Francisco "gender reassignment" surgery center and a 21+ gay nightclub. 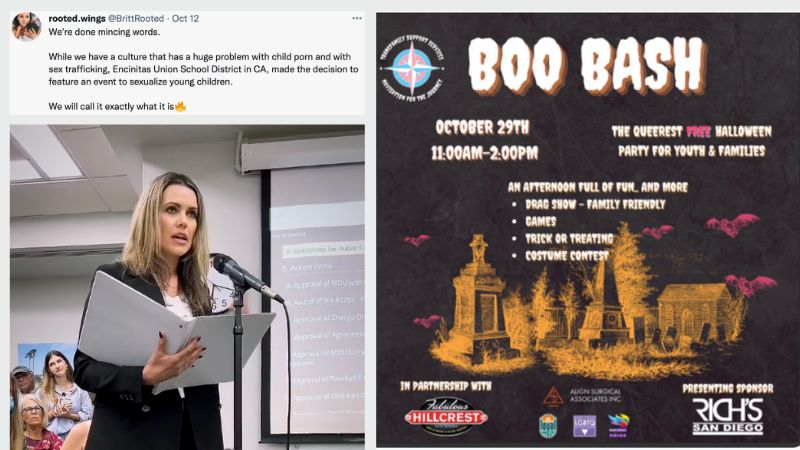 The parents' rights group Rooted Wings posted video of Brittany Mayer, a mother and member of the group, giving a powerful speech before the Encinitas Union School District Board (EUSD) on Wednesday objecting to a family-friendly drag queen show invitation that the school board shared on their social media.

The searing speech was in response to the post which invited local families to "Boo Bash: The Queerest Free Halloween Party for Youth and Families" which is sponsored by the San Francisco "gender reassignment" surgery center Align Surgical Associates, and a 21+ gay nightclub. According to local news the school district also shared the invitation via a digital community page called PeachJar.

"I just want to know what it is that makes a drag show family friendly? If you follow it to its logical conclusion you can slap family friendly titles on anything," she began.

The mother, who is the founder of the group, continued her criticism of the school board.

"What is it about a grown man, and I honestly sincerely as a woman mean this, what is it about a grown man, costumed in a sparkly bra with augmented boobs bursting out, and a mini skirt barely covering his twerking ass, with duct tape on his front, spreading his fish-netted legs as he writhes on the ground grinding his groin next to a minor 'Family friendly'," she asked.

“You owe us an answer. You don't get to hide by just taking something down off Peachtree and calling it a day. You owe an explanation and apology."

"You all got caught with your sparkly panties down."

"You all played the activist pimp for an Align surgical centre and for a 21+ gay bar. It makes you groomers and activists pimps, and we won't have those sitting on a school board who oversees the education of our children"

According to the Daily Mail, the school said the advertisement was not an endorsement.

"You all stepped out of line. You should be ashamed. There is nothing loving, there is nothing 'lets unite and include' because the logical conclusion of that is diabolical evil. There are boundaries, and you don't get to slap family friendly titles on stuff to cover your ass"

"Gender nullification surgery can enable non-conforming patients to enjoy a relatively smooth genital area," reads their website. "Nullification creates a relatively continuous and mostly unbroken transition from the abdomen down into the genital area, enabling gender non-conforming patients to enjoy a body that looks closer on the outside to the way they feel on the inside."

Elected San Diego supervisor Terra Lawson-Remer hit back at the parents protesting the event, saying they ought to be ashamed of themselves for "pushing hate and intolerance."

Lawson-Remer then proudly announced that she would be taking her three-year-old to the event.