"He and his ilk deserve whatever comes their way, including losing jobs, getting sick, and perhaps dying from this virus," said the National Education Association board member. 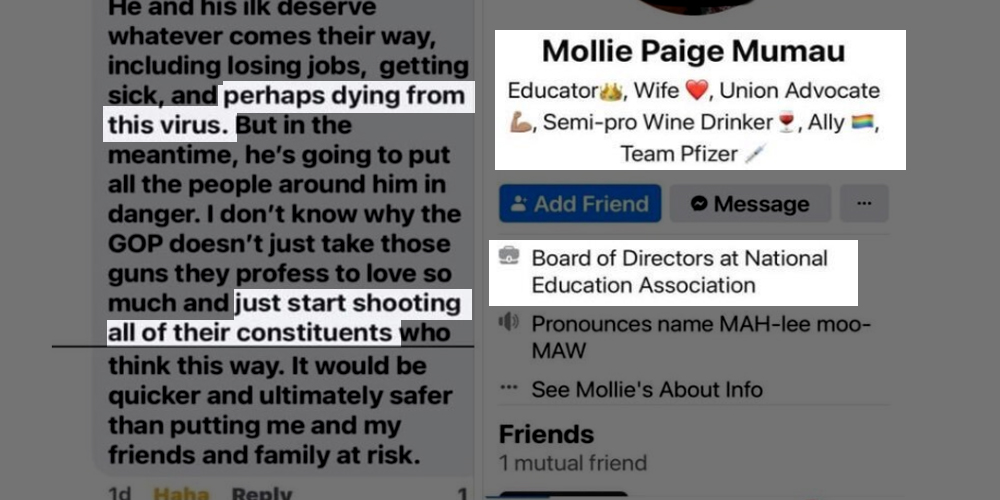 While a Pennsylvania school system is investigating a teacher’s extreme remarks about religious objections to vaccine mandates, the National Education Association has not yet commented on an episode involving one of their members.

They have, however, removed Mollie’s name from the NEA board members list on their website. According to a Google cache comparison with the current page as of now.

Tensions between educator groups and parents escalated in 2021 amidst a battle over pandemic restrictions within various school systems, alongside a heated debate over the ideological bent with certain materials being taught to students.

It started when the Libs of Tik Tok account posted what Mollie Paige Mumau said on Sunday, posted to Facebook.

According to Erie Times-News, General McLane School District officials are investigating the teacher’s reply to a story about a Pennsylvania man being threatened with job loss over refusing to take the COVID vaccine.

A district spokeswoman told the following to local outlets on Monday:

"The district is aware of a potentially inappropriate social media comment by a staff member. The district will investigate the matter and act accordingly. In all situations, the district’s utmost concern is the safety of our students and staff."

The first half of Mumau’s remarks are a rant there’s people seeking religious exemptions from COVID vaccine mandates in the first place. The issue in of itself is making its way through the legal system this week as a recent federal court ruling blocked the Biden administration’s demand that government contractors be forced into getting the jab.

But then Mrs. Mumau gets angrier about the situation, as if the "Team Pfizer" descriptor in her Facebook biography wasn’t enough of an indicator as to her devotion to vaccines.

"He and his ilk deserve whatever comes their way, including losing jobs, getting sick, and perhaps dying from this virus. I don't know why the GOP doesn't just take those guns they profess to love so much and just start shooting all of their constituents who think this way."

Libs of Tik Tok further highlights the position that Mumau has with the National Education Association. She’s listed under the Pennsylvania section of the NEA’s 2020/2021 handbook.

Instead of releasing a statement, the NEA is hiding replies.