For the Times, Trump committed an "unprecedented assault on the integrity of American democracy," which they say "requires a criminal investigation." 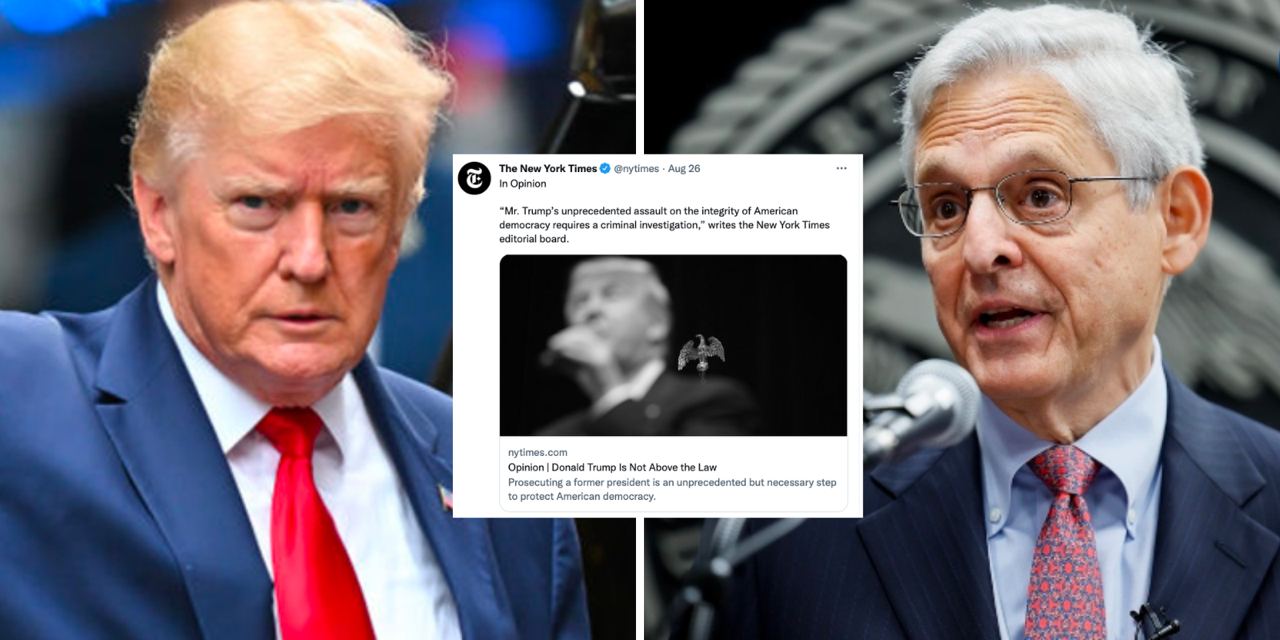 The New York Times Editorial Board has called for the Biden administration's Department of Justice to prosecute former President Donald Trump. The crimes of which he's accused have not yet been fully elucidated, due to a heavily redacted affidavit, provided under duress by the DOJ to explain why a search warrant was approved for an FBI raid of Trump's Mar-a-Lago residence.

The Times asserts that the "nation has been transfixed" by the overly produced, prime time hearings of the essentially partisan, Democrat-run January 6 Committee, which hauled witnesses before the cameras to give hearsay testimony.

The DOJ's seeking of a search warrant to raid Trump's home was not connected to any charges that may be brought by that Committee. The DOJ is seeking criminal charges against the former president for how he handled documents, while the January 6 Committee is searching for evidence that Trump was involved in planning the riot at the Capitol that occurred on that day in 2021.

The Times asserts that there is no question as whether or not Trump spurred on an angry mob to enter the Capitol, saying that "When all else failed," in his political redress to seek potential election improprieties, "he roused an armed mob that stormed the Capitol and threatened lawmakers."

The results of the January 6 Committee, they say, is that "Mr. Trump must have known he was at the center of a frantic, sprawling and knowingly fraudulent effort that led directly to the Capitol siege. For hours, Mr. Trump refused to call off the mob."

What the Times asserts is that "If Mr. Garland decides to pursue prosecution, a message that the Justice Department must send early and often is that even if Mr. Trump genuinely believed, as he claimed, that the election had been marred by fraud, his schemes to interfere in the certification of the vote would still be crimes. And even though Mr. Trump’s efforts failed, these efforts would still be crimes. More than 850 other Americans have already been charged with crimes for their roles in the Capitol attack. Well-meaning intentions did not shield them from the consequences of their actions. It would be unjust if Mr. Trump, the man who inspired them, faced no consequences."

The alleged crimes as alleged by the DOJ appear to amount to holding onto several boxes of documents that may include national security secrets, and holding those documents in non-secure storage areas. Former Trump administration officials have claimed that Trump had declassified the documents that were at his home prior to their arrival there.

The Times believes that the crimes are much broader than the DOJ has laid out, namely, improper handling of documents. Instead, the Times asserts that "The specific crimes the Justice Department could consider would likely involve Mr. Trump’s fraudulent efforts to get election officials in Georgia, Arizona and elsewhere to declare him the winner even though he lost their states; to get Mr. Pence, at the Jan. 6 congressional certification of the election, to throw out slates of electors from states he lost and replace them with electors loyal to Mr. Trump; and to enlist officials from the Departments of Justice, Homeland Security and Defense to persuade officials in certain states to swing the election to him and ultimately stir up a mob that attacked the Capitol. The government could also charge Mr. Trump with seditious conspiracy, a serious charge that federal prosecutors have already brought against leaders of far-right militia groups who participated in the Capitol invasion."

For the Times, Trump committed an "unprecedented assault on the integrity of American democracy," which they say "requires a criminal investigation." They alleged that "the disturbing details of his post-election misfeasance, meticulously assembled by the Jan. 6 committee, leave little doubt that Mr. Trump sought to subvert the Constitution and overturn the will of the American people."