AOC hit with ANOTHER ethics complaint for attending Met Gala

Ocasio-Cortez allegedly received other prohibited gifts for the event, including her custom "tax the rich dress" and other lavish amenities. 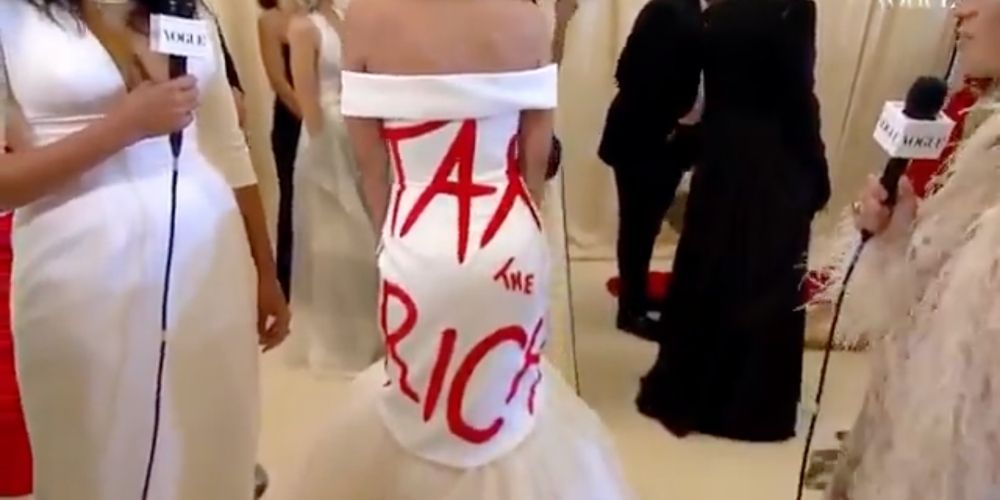 The National Legal and Policy Center, a conservative watchdog group, filed a complaint with the Office of Congressional Ethics on Thursday that alleged Ocasio-Cortez's acceptance of free tickets to the event violated House Gift Rules, according to the Daily Caller News Foundation.

The tickets, in which she obtained two for herself and her boyfriend, run at $35,000 apiece.

The group also claimed that she also received a prohibited gift in the form of sitting at a sponsored table during the event, which are reportedly valued at up to $300,000, according to the DCNF.

"In short, it is the table sponsor who is gifting or underwriting a coveted seat to AOC at the Gala," states the complaint. "And if the sponsor of the table where AOC sat was one paid for by one of the corporations attending the event, such as Instagram or Facebook, AOC has received a prohibited gift from the corporation that also lobbies Congress."

Ocasio-Cortez allegedly received other prohibited gifts for the event, including her custom "tax the rich dress" and other lavish amenities.

"Representative Ocasio-Cortez may have violated the House Gift Rule by accepting free admission for herself and boyfriend to the Met Gala event and receiving related gifts before, during, or after the event, including the use of custom-designed dress, limousine service, the use of the Carlyle Hotel, professional hair and makeup services, and any other related services or goods," stated the NLPC's complaint.

A spokesperson for the Metropolitan Museum of Art — the location where the Met Gala takes place and where the proceeds of the event go — told the DCNF that elected officials like Ocasio-Cortez that attended the event were "guests of the Museum."

Regarding the custom-made dress, Ocasio-Cortez wrote on Instagram that the dress was "borrowed" from the designer and that her attendance at the event was in line with her "responsibilities in overseeing our city's cultural institutions that serve the public."

The NPLC states that the use of the dress violates the House Gift Rule because the designer had to devote "valuable professional services in designing and making this one-of-a-kind dress."

On Tuesday, conservative watchdog group the American Accountability Foundation filed the first complaint against Ocasio-Cortez's appearance at the event with the Office of Congressional Ethics.

They alleged Ocasio-Cortez could not accept the free tickets for the event because "a for-profit company, Conde Nast, manages invitations to the charity event," wrote the DCNF.

The complaint also noted issues with Ocasio-Cortez's boyfriend, Riley Roberts, attending the event for free as her plus one. The group states that "the House Gift Rule permits lawmakers to only provide a second ticket to a charity fundraiser, their spouse or dependent child," according to the DCNF.

"Thus, because her boyfriend is not her 'spouse or dependent,' her acceptance of an 'invite plus one' to the Met Gala would violate the Gift Rule unless AOC or her boyfriend paid for his $35,000 ticket, an unlikely scenario," said the NLPC’s complaint.