Omicron vaccine will be ready in March, says Pfizer CEO

"It's not that it won't be effective against the other variants, but against Omicron as well." 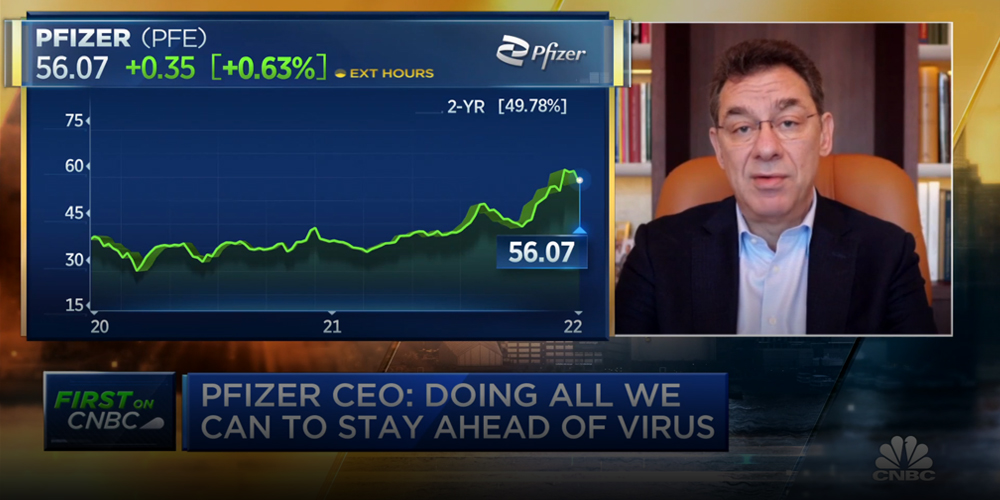 Pfizer CEO Albert Bourla told CNBC's "Squawk Box" on Monday that the company's vaccine for the Omicron variant will be ready in March 2022.

The host opened up the segments talking about preparations countries are making for the fall and how countries like Israel have introduced a fourth booster dose.

"I don’t know if there's a need for a fourth," said Pfizer CEO Albert Bourla.

In the past few months, both Pfizer and Moderna have admitted that the effectiveness of their original COVID-19 products wears off over time—while the onset of the highly-transmissible Omicron variant over the last several weeks has created further pressure on widespread efficacy concerns.

Bourla went on to predict that the Omicron-targeted vaccine will be ready soon as the company is "already starting manufacturing some of these quantities at risk."

"Also we're working on a new version of our vaccine, a version that will be effective against Omicron as well. It's not that it won't be effective against the other variants, but against Omicron as well. The hope is that we will achieve something that will have way way better protection, particularly against infections because the protections against the hospitalizations and severe disease is reasonable right now, with current vaccines as long as you’re having let’s say the third dose."

Another area of concern for the Pfizer CEO is getting COVID-19 vaccines to "low-income countries." Bourla reiterated that he doesn't know how much the world needs this particular variant vaccine, or how countries will distribute it, but that it’ll be ready all the same.

CNBC cites a study from the United Kingdom that says both Pfizer and Moderna are "only about 10 [percent] effective" at preventing symptoms of Omicron 20 weeks after the second initial dose.

A former FDA commissioner told the program that it's likely that the Omicron infection wave currently hitting the US will subside by mid-February. Recent studies have shown that the Omicron variant of COVID-19 is less severe than previous iterations.