11-story tall blades flew the full length of a football field and plowed a 4-feet deep furrow in a wheat field. The heavy-duty bolts that kept the blade attached to the tower scattered like shrapnel. 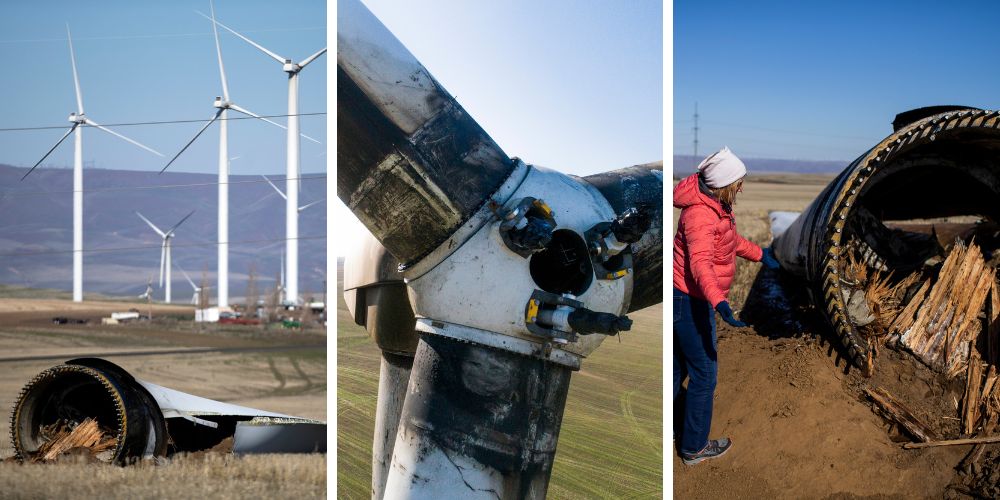 A new report has revealed the unreliability of a major Oregon wind farm, discovered after a blade from a windmill detached and flew across the field.

According to The Oregonian, in January, a delivery driver found some broken, industrial-size bolts on the ground near one of Portland General Electric’s towering wind turbines but did not know who to tell and used it as a paperweight.

On Feb 1 at 2:11 am, one of the turbine’s 11-story tall blades flew the full length of a football field and plowed a 4-feet deep furrow in a wheat field. The heavy-duty bolts that kept the blade attached to the tower scattered like shrapnel.

PGE’s flagship wind facility, which opened 15 years ago to expand green energy technology in Oregon and nationally had other warning signs as well according to the outlet but it wasn’t until the blade breakdown that the company took action at Biglow Canyon, one of Oregon’s largest wind farms, and shut down all 217 turbines for testing, keeping some out of service for four months.

An investigation by The Oregonian found a massive set of maintenance problems and equipment failures that are reducing electricity generation at Biglow Canyon.

Among the findings were:

According to the outlet, "there is no effective national, state or county reporting requirement or database tracking safety or operational incidents at wind farms, and only 13 of the largest of Oregon’s 48 wind farms are regulated by the state, numbers that include multiple phases of some projects."

Additionally, PGE launched an investigation into the blade throw but has asked the Oregon Department of Energy to keep those confidential until the end of the year because of the possibility of litigation.

PGE has said that state regulators have not issued any violations for failing to report safety incidents. According to the company only two of the incidents it did report were actually related to public health and safety, leaking oil posed only a low environmental or fire risk, and lost service time is likely the result of grid constraints beyond its control.

Vestas, which has its North American headquarters in Portland, said its investigation into the blade failure but could not share results because they contain proprietary information and claimed there was no evidence to suggest that inadequate maintenance has shortened the lifespan of turbines at Biglow Canyon and that the project continues to operate at or above industry standards.

PGE is Oregon’s largest electricity provider, serving approximately 900,000 homes and businesses in the state, plans to transition to 100 percent carbon-free energy by 2045, and its customers will be footing the bill.

To eliminate all its greenhouse emissions, PGE would need to massively increase its renewable energy resources and manage them effectively for decades. However, wind power is heavily dependent on federal subsidies, and according to experts consulted by The Oregonian, "those subsidies are structured in a way that incentivizes operators to skimp on maintenance for older equipment that is no longer eligible."

Biglow Canyon landowners recently hired a Portland lawyer to investigate potential remedies to a perceived lack of transparency from PGE, and feeling financially shortchanged by excessive turbine downtime, as payments to them are based on energy production.

Landowners have said that they had concerns about oil and lubricants leaking from PGE’s turbines and that the problems began over a decade ago, leaks that likely fall below the threshold for reporting oil spills to the Department of Environmental Quality.

Oil has also leaked from Biglow Canyon’s on-site transformers with ten transformers having failed at Biglow since 2010, three times more than reported by any other facility regulated by the state, according to Department of Energy records. Nine transformers under both Vestas and Siemens turbines and one in a substation spilled some 3,400 gallons of mineral oil, 90 percent of it into the ground which prompted excavation and soil replacement.

According to The Oregonian, pieces of turbine equipment are falling into landowners’ fields regularly and PGE has not reported those incidents to the state promptly, or in some cases at all.

According to a study published in the academic journal Engineering Failure Analysis, the failure of blade bolts due to stress and metal fatigue is cited as a frequent cause of turbine failure.

According to The Oregonian, the facility has never hit the 37 percent of its rated capacity of 125.4 megawatts that was promised when the project began and instead has averaged 27.6 percent, well below projections.

However, the outlet noted that nearby facilities are performing better.

PGE’s alternative to spending more on maintenance would be to replace most of the components of the Vestas turbines, which would, increase their efficiency and output and is not uncommon. But ratepayers could end up swallowing the remaining value tied to the existing machinery.

The decision might have been helped by the Inflation Reduction Act passed by Congress this month which renewed the federal production tax credit subsidy for another 10 years for wind and solar farms that begin construction prior to Jan. 1, 2025, including repowering turbines.