The trans-rights activist who performed this stunt is a member of the anonymous group P*ssed Off Trannies which delivered 60 bottles of urine to the EHRC in a form of protest they call a "p*ss in." 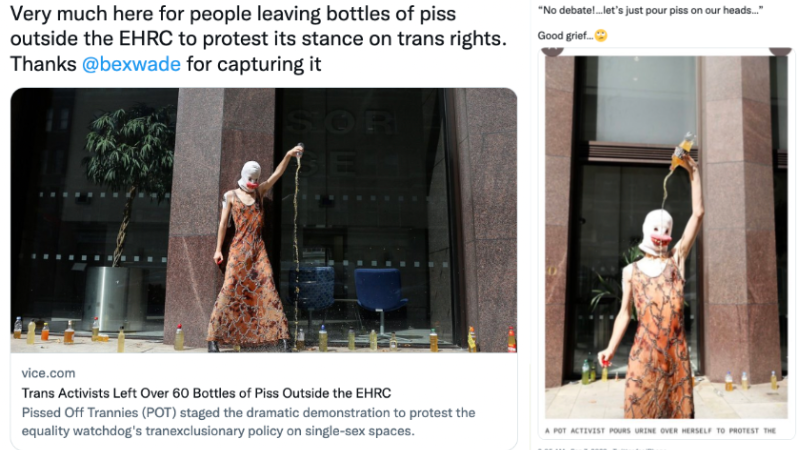 There were bizarre scenes outside the Equality and Human Rights Commission in London on Tuesday, when an individual clearly born male, wearing a bejeweled gown and a demonic duck mask, first urinated then proceeded to pour a bottle of urine over themselves, while shouting: "The EHRC has blood on its hands and piss on its streets."

According to Vice, the trans-rights activist who performed this stunt is a member of the anonymous group P*ssed Off Trannies (POT) which delivered 60 bottles of urine to the EHRC in a form of protest they call a "piss in."

The activist described the protest to Vice as "an extreme version of the public embarrassment that trans people experience on a daily basis, using the toilet that either doesn't fit with their gender or using the one that does, and then facing the backlash of people's judgment. The Equality and Human Rights Commission… is more concerned with pushing its transphobic agenda than it is in protecting the civil rights of the people it's meant to serve, which is UK citizens."

The "transphobic agenda" to which the urine-soaked activist is referring is the EHRC guidance published early this year stating that it is lawful for businesses and organizations to exclude male people from female-only spaces such as bathrooms, changing rooms, and hospital wards.

It is the job of the EHRC to uphold the Equality Act of 2010 and to balance the rights of the various protected characteristics, which include both sex (being a man or a woman) and gender reassignment (being an individual who is 'proposing to undergo, is undergoing or has undergone a process or part of a process to reassign their sex). Self-declared gender identity is not a protected characteristic under the act.

Vice also noted that earlier this year, the EHRC advised that the government ban on conversion therapy should not apply to "trans conversion therapy," meaning that exploratory talk therapy and ethical attempts to help a person overcome their gender dysphoria and accept their body without the need for medical intervention should not be equated with the widely discredited practice of gay conversion therapy, or telling someone to change their sexual orientation.

After the spectacle, which one sympathetic Twitter user described as "a beautiful statement and performance art", the Pissed Off Trannies made a quick getaway, leaving bemused security staff to call the police and then clean up the mess.

It remains to be seen whether this fragrant display will finally convince British women to welcome males into their female-only spaces.

Many on Twitter had something to say about these events.