As to efficacy, Pfizer said that there weren't actually enough cases among the tested group to determine how effective the vaccine was against Covid. 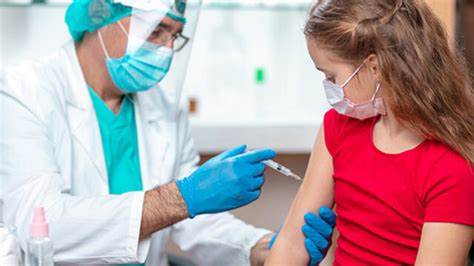 The Pfizer/BioNTech vaccine has been found by the maker to create a strong immune response in children ages 5-11 years old. They will now seek FDA authorization so they can move forward with supplying the medication to young children, who have thus far been unapproved to receive it.

As to efficacy, Pfizer said that there weren't actually enough cases among the tested group to determine how effective the vaccine was against Covid. A spokesperson said they may disclose efficacy from the trial at a later point.

In a release, Pfizer Chief Executive Albert Bourla said that "Since July, pediatric cases of Covid have risen by about 240 percent in the US—underscoring the public health need for vaccination," according to Reuters.

According to the CDC, there have been 439 deaths from Covid for those under 18 in the US, out of over 56,000 total deaths in that age group for the same time period. 291 of those deaths also involved either the flu or pneumonia.

"These trial results provide a strong foundation for seeking authorization of our vaccine for children 5 to 11 years old, and we plan to submit them to the FDA and other regulators with urgency," Bourla said.

"The need is urgent," The New York Times reported. "Children now account for more than one in five new cases, and the highly contagious Delta variant has sent more children into hospitals and intensive care units in the past few weeks than at any other time in the pandemic."

Bourla said that "Over the past nine months, hundreds of millions of people ages 12 and older from around the world have received our COVID-19 vaccine. We are eager to extend the protection afforded by the vaccine to this younger population, subject to regulatory authorization, especially as we track the spread of the Delta variant and the substantial threat it poses to children."

Reported side-effects, the company said, were similar to those observed in the 16-25-year-old age group. Pfizer said that they did not observe any cases of heart inflammation in the 5-11 age group, though regulators have said that this has occurred, mostly among young men, in the teen to young adult group.

Approval could come from the FDA within three weeks of the company submitting its request for authorization. The vaccine from Pfizer/BioNTech is already authorized for children over the age of 12.

The recommended dosage for those 11 years and under is one-third the size of the dose for their older counterparts. Additional testing is being done to test efficacy and safety for children under the age of five.

Dr. Ugur Sahin, CEO and co-founder of BioNTech, said that "The safety profile and immunogenicity data in children aged 5 to 11 years vaccinated at a lower dose are consistent with those we have observed with our vaccine in other older populations at a higher dose."