A statement released by Poilievre on Wednesday highlights that inflation in Canada has hit 7.7 percent, the highest rate seen in 39 years. 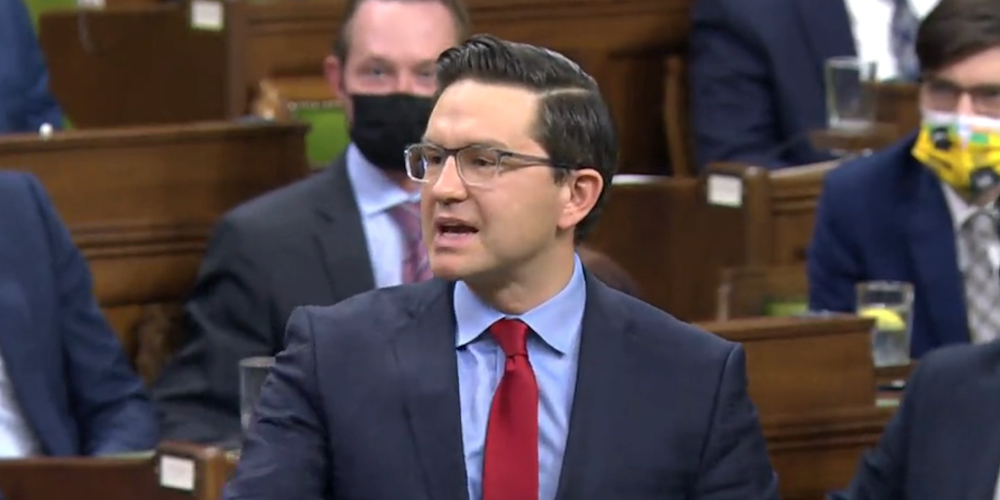 Conservative Party leadership front runner Pierre Poilievre announced his plan to cap spending with aims to make government more affordable with a "Pay-As-You-Go Law" that will make it so that the government find a dollar of savings for every dollar of new spending measures.

A statement released by Poilievre on Wednesday highlights that inflation in Canada has hit 7.7 percent, the highest rate seen in 39 years.

"JustInflation means Canadians are paying for a massive increase in the cost of government through wild inflation and taxes - and they can’t afford it anymore," the statement says.

It continues: "In 2015, the last year Stephen Harper was Prime Minister, the federal government cost $8,063 per person. Last year, it cost $11,370—adjusted for inflation. That’s a $3000 per person increase - or over $12,000 per family of four. The Liberals can’t blame it on the pandemic. The Parliamentary Budget Officer reports that over $200 billion in new federal spending measures passed in the last two years that have nothing to do with COVID programs."

The Poilievre Pay-As-You-Go Act "would cap spending by requiring the government to find money for new measures within existing budgets, rather than increasing the debt and taxes. In order to introduce a new dollar of spending measures, the government would first need to find a matching dollar of savings. The law would exempt funding for national emergencies like wars, pandemics and natural disasters and spending increases that were previously budgeted (such as the annual growth in health transfers or military budgets) would not be impacted. However, new spending measures not previously budgeted would require matching savings," the statement says.

"Families and businesses already follow the Pay-As-You-Go Law every day. When they spend more on one thing, they spend less on another. A family budget can afford a $2,000 vacation or a $2,000 renovation. Not both. They must pick. Still better, they might go deal hunting to get their vacation down $1,000 and get surplus lumber from a local construction site to cut their costs. They can do both by getting bargains on each—but they can’t blow through their budget. That is life in the real world. The Pay-As-You-Go Law brings the real world to government. The people have been pinching their pennies long enough. It is time politicians started pinching their pennies too."

The statement then lays out the benefits of a Pay-As-You-Go Law.

Benefits of a Pay-As-You-Go Law

Bargain hunting: Right now, there is no incentive for anyone in government to root out failing or wasteful programs. When a cabinet minister does so, there’s no photo op, promotion or social media hashtag. If public servants or politicians try to reduce costs today, they get angry bureaucrats and corrupt interest groups attacking them for taking away their honey pots.

It is easier to simply spend more, even without additional benefit to the public—because someone else is paying for it all.

Under Pay-As-You-Go, ministers would not be able to introduce new programs without getting rid of old ones, they would need to scour for waste that would otherwise go on robbing taxpayers into perpetuity.

Performance: Pay-As-You-Go would signal to the public service that bureaucrats would have to compete and prove the dollars they spend get the best value—just like private sector workers and entrepreneurs do every day.

Affordable government: With budgets capped, the taxpayer and the economy would have the chance to catch up with the cost of government. Affordable government would mean an affordable life for Canadians, with less inflation and taxation later on. "Since the start of the pandemic, the Government has spent, or has planned to spend, $576 billion in new measures—over 35 per cent, $204.5 billion, of this spending is not part of the COVID-19 Response Plan," wrote the Parliamentary Budget Officer. Had Pay-As-You-Go been in place, the non-COVID-related spending would have had to have been matched by savings, meaning the total debt would have been $204 billion smaller and the resulting inflation lower.

Poilievre continued on to note that the US had a similar law in place in the past, which greatly diminished the country's deficit.

"The US Congress imposed a Pay-As-You-Go Law on the deficit-prone United States Federal Government in 1990. It remained in place throughout the Clinton administration. Within a few years of its introduction, the deficit was gone and America had its first balanced budget since 1969. The US government would then pay off $401.5 billion of debt (in nominal dollars) from 1998-2001 with the help of Pay-As-You-Go. The law expired under George W. Bush in 2002 and the US government immediately returned to deficit," he wrote.

"Neither Republicans nor Democrats have been able to get government spending under control or balance the budget since the Pay-As-You-Go law ended in 2002. Pay-As-You-Go does not limit what we get from the government. It limits what it costs us," Poilievre concluded.