POSOBIEC: Is the West dead?

Is the West in crisis? Could it even be dead? These are the questions Posobiec addressed in Budapest. 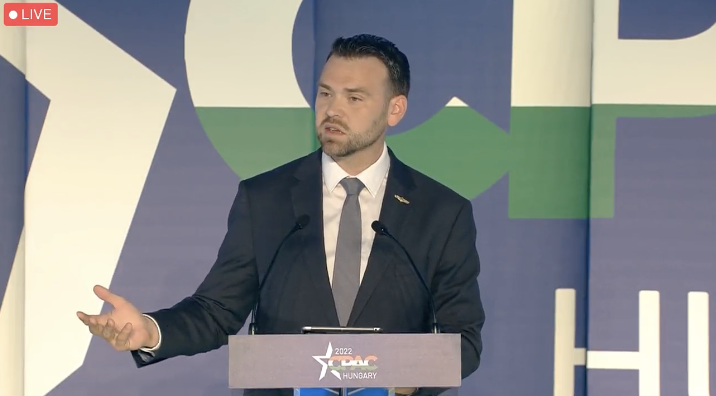 Jack Posobiec of Human Events Daily spoke at CPAC in Budapest, Hungary, to address the status of western civilization. Is the West in crisis? Could it even be dead? These are the questions Posobiec addressed in Budapest.

"I am an American," he began, "but my family heritage is of Poland, and like Hungary, Poland understand the dire threat of totalitarian, bureaucratic, unelected governance, whether it comes from Moscow or from Brussels. Tonight, I come to you tonight with a very important question: Is the West dead?"

"You might say this question is ridiculous. The West is not dead. The West can never die, so long as there are those who are willing to fight for it. Those like the people in this room.

"Yet if you look outside this room, the prognosis looks grimmer by far. Every day, a new outrage against the history, values, and very identity of the West is committed under cover of darkness. A darkness that, like the devil who created it, has many names. You might have heard some of them.

"Wokeness. Globalism.  Open societies. Technocratic neoliberalism is a new communism for a new age. I spent years living in China, and it is clear to me that neoliberalism is attempting to copy the model of authoritarian power of the Chinese Communist Party over the entire West.

"Some would argue the West is already dead. Almost 60 years ago, the scholar James Burnham described the managerial liberalism of the 20th century as the voluntary suicide of the West. Does anyone dispute his thesis, now that we have seen almost 60 years of the results?

"We have watched as our schools were turned to incubators for racial and gender strife.

"Laws are twisted into arbitrary bureaucratic mandates, only to be applied to political opponents and the middle class, never to actual criminals or the ruling class.

"Reason was rendered subject to the tears of the weak and hysterical.

"The unhealthy were declared beautiful, the unworthy declared experts, and the unfit declared strong.

"Wars were begun under the pretext of lies and sovereign instability was created by those who seek to profit from armed conflict and porous borders.

"Against 60 years of a wasting disease like global liberalism, what civilization could still stand?

"You and I know that what they are really celebrating is the end of beauty, the end of intelligence, and the end of strength, but say that and you will be gagged on social media, your life and job will be taken, your savings will be pilfered, and your name will be mud. And so even if the West is not dead, we are forced to watch it die, with no cure offered except more of the same disease. Say otherwise and you will be labeled a purveyor of disinformation.

"And so I ask I again. Is the West dead? Yes, the West as we inherited it is no more. But we are called to be the stewards of the West. We owe it to those who came before us who built the castles of Budapest, the basilicas of Rome, the Royal Mines of Krakow, the Notre Dame de Paris, and who came to America and built a new nation under God.

"As a Catholic, I know this does not have to be the end of the story. Because like Christ, the West will not stay dead… Gustav Mahler once said that tradition is not the worship of ashes, but the preservation of fire. You may reduce the West to ashes, but within those ashes, the spark of tradition will always be waiting. Tonight, we gather to fan that spark, and to pray that its cleansing fire will inspire a new rebirth. Tonight, I stand before and you and make a call that must be heard from Budapest to Boston, from Paris to Pittsburgh, from Rome to Rochester - it is time for a Rebirth of the West.

"What is Western Civilization?

"The West is defined as this: Greek philosophy. Roman Law. The words of the Holy Bible.

"In the disputes between Plato and Aristotle, there is fruit for millennia of political progress. In the legal traditions of Rome, you can find an elegant devotion to liberty that dwarfs the cheap ad hoc 'rights' language of legal fan-fiction like Roe v Wade. In the teachings of Christ, St. Paul, Abraham, and Moses, the human yearning for goodness finds more eloquent expression than in any degraded woke version of 'moral clarity.'

"You will notice, by the way, that I do not say that to win, we must return to a single tradition. That would be as foolhardy as trying to construct one from whole cloth, as our enemies are attempting to do. Not one of these traditions has ever defeated its enemies on its own. The great thing about the West is that we have always found ways to take what is great in different parts of our heritage, and to fashion new visions of the future. Our success has always come from embracing the best in each of our cultures, and allowing true national sovereignty to flourish, from defending the borders of our lands, to growing our families and our homes. This has always been the vision of the West. We need a vision like that now.

"A vision confident enough to settle the stars.

"A vision sublime enough to inspire the next generation to build cathedrals, compose symphonies, write masterworks, and to dream beyond any imagination.

"With that vision, the West will rise, like Lazarus, from its tomb and cast away the blindness and darkness of our era with the searing light of truth. A real life will once more be a birthright, and a good life will once more be possible. Beauty, genius, and strength will thrive again. And we will look back on the shadows dancing on the grave of the West as fake, weak, decadent illusions. Illusions that will be burned away as the phoenix that is the West rises again.

"We will not allow the inheritors of Western Civilization to be forced into the slavery of atomized, materialistic lifestyles controlled by the likes of Klaus Schwab and the World Economic Forum. We will not allow the World Health Organization and their pandemic treaties to usurp the sovereignty of our nations.

"Ladies and gentlemen, for the sake of our inherited civilization, of our shared history, of our shared values, and of our shared future, stand with me as we prove that, like the rebirth of the West, we are inevitable."