"I can't say with a certainty how The New York Times got this information, but I can say that they got it in a way that is illegal and unethical," Dhillon added. 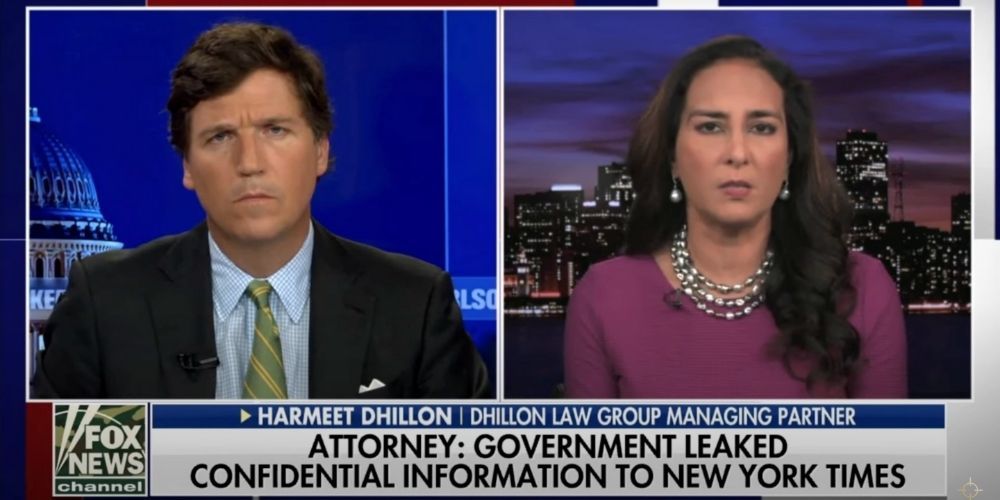 On Thursday evening, attorney Harmeet Dhillon sat down with Tucker Carlson to talk about the raid on her client, Project Veritas founder and CEO James O’Keefe, and how The New York Times published a story containing privileged information that was obtained in an "illegal and unethical" way.

O'Keefe's home was raided by the FBI on Saturday morning, which Dhillon said that they "had a battering ram, and they threw him out in the hallway and took, you know, in handcuffs and took his phones."

"Now a lot of privileged information was on his phones, including communications with -- by my count four dozen different lawyers over the years. And coincidentally, this publication came out this afternoon from The New York Times," she continued.

"I can't say with a certainty how The New York Times got this information, but I can say that they got it in a way that is illegal and unethical," Dhillon added.

Dhillon stated that its a "very disturbing situation of the U.S. attorney's office and/or the FBI tipping off The New York Times to each of the raids on Project Veritas — current and former employees."

She states that the know the outlet had been tipped off because reporters from The New York Times were calling mere minutes after the raids occurred, both on O'Keefe's house and earlier in the week on other Project Veritas-associated properties, and were the only journalism outlet to know they occurred.

"And they published this hit piece today, which is really despicable. I don't think I've ever seen this low from The New York Times before — to publish people's private legal communications," said Dhillon.

Dhillon continued on to ask "what does it prove?"

"All it proves is that Project Veritas is an honest and thoughtful journalistic organization that sought legal advice before making various publications. That's what Fox News does. That's what The New York Times does. And that's what every major journalism outlet does. So, I don't know what 'gotcha' they think they were doing there other than they got themselves. Because they criticized Project Veritas for its tactics. And yet they sink so low, Tucker," said Dhillon.

Carlson asked Dhillon if there was "any way to catch them in the act of doing this?" adding that "which I think would be a crime."

"We asked the court to order a special master, to review this information and let the Southern District of New York prosecutors and the FBI look at it without somebody separating out this information. The government would not agree to do that voluntarily, but we went to court and today a federal judge did order the government to stop looking at these phones," Dhillon responded, stating that the phones obtained "confidential source information" from sources in the Biden Administration, as well as sources in "corporate America" and donor information.

Dhillon noted that the Privacy Protection Act is in place to protect journalists and their information "from exactly this type of thuggish behavior."

"But what the DOJ has done in this case -- they have blown federal law. They have blown the constitution; they have blown due process and civil rights. And now they're communicating at some level for sure with The New York Times. So, this is a scandal of epic proportions and every journalist who isn't worried and concerned about this should hang up their journalism card, ditto, all First Amendment lawyers as well," she concluded.

Following Saturday's raid on O'Keefe's home, the United States District Court Southern District of New York issued an order on Thursday for the Department of Justice to pause the extraction of data from O'Keefe's phone, reportedly ordering a hearing in it.

The raid comes as part of an investigation into the whereabouts of Ashley Biden's diary, of which Project Veritas had reportedly obtained, but turned over to law enforcement after deciding not to run a story on it, questioning the legality of it