Protests against stay-at-home orders ramp up in Washington State

Thousands of protestors gathered in Olympia to protest stay-at-home orders and advocate for a reopening of the local economy and a return to work. 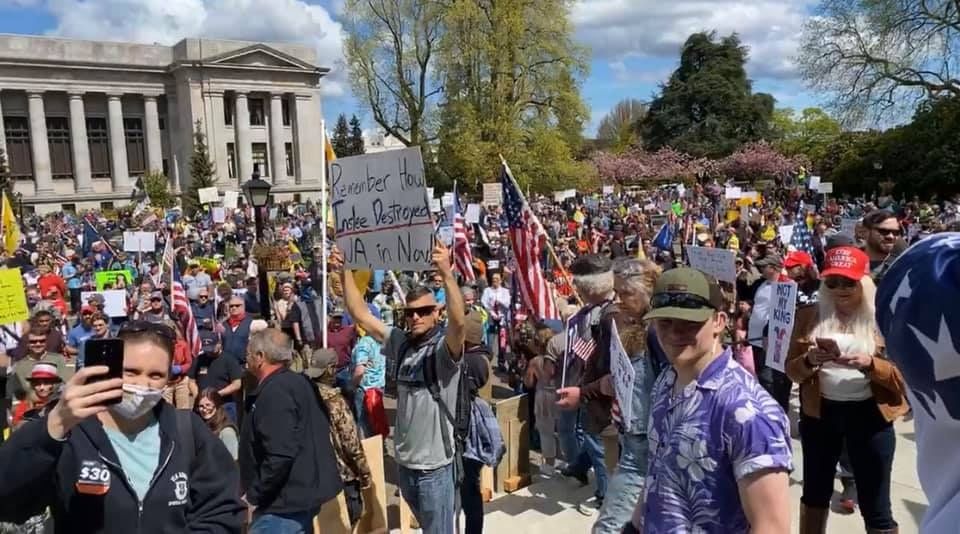 On Sunday, thousands of protestors gathered in Olympia, the Washington state capital, to protest Governor Jay Inslee’s stay-at-home order and advocate for a reopening of the local economy and a return to work. The event was organized by Tyler Miller, a 39 year old engineering technician from Bremerton.

While some media outlets tried to downplay the turnout claiming only “hundreds” attended, the Washington State Patrol estimated between 2000 and 2500 demonstrators. According to attendees, there were many more including those social distancing in vehicles. Turning Point USA activist Katie Daviscourt who attended the event estimated “…4000-4500 people with many more in cars” jamming the streets around the capital.

Daviscourt described the demonstrators as “proud patriots” made up of people across the political spectrum including Democrats and Republicans. She added that it was one of the most enjoyable and positive demonstrations she had ever been to perhaps because “… the usual Antifa activists chose to stay home and social distance.” She did add that there were a few of the militant activists at the event but far fewer than usually show up to oppose these types of demonstrations.

According to the Washington State Patrol, the rally was peaceful with no arrests. Attendees waved “Don’t tread on me” and American flags as well as various placards while chanting “USA” and variations of “Vote Jay Out” slogans. Several Republican members of the legislature and candidates for governor also attended the event. Facebook groups such as ReopenWA, in just a few days of being created, have grown to over 20,000 members in the wake of the event.

Former Democratic Presidential candidate Governor Inslee, in his ongoing feud with the President, responded: “The president is fomenting domestic rebellion and spreading lies even while his own administration says the virus is real and is deadly, and that we have a long way to go before restrictions can be lifted.” The governor concluded by saying that “The White House released a sensible plan laying out many of the guidelines that I agree are essential to follow, as we work to resume economic activity.” Critics were quick to point out the governor’s repeated support of local activist groups with “domestic rebellion” agendas.

Demonstrations against the shut down orders are becoming more common in the state. On Saturday, fisherman in Washington took to their boats and protested the Washington State Department of Fish and Wildlife ban on recreational fishing.

Inslee has been repeatedly criticized for his shutdown orders with no plans to mitigate the impact on businesses. Businesses in Washington across industries have experienced losses of revenue as high as 90 percent of their usual numbers. While some businesses have been deemed “essential” by the governor, many claim that the governor is “picking winners and losers” arbitrarily. While many businesses have been shuttered and forced to lay off or furlough employees, the government has not cut spending, laid off or furloughed any government workers.

Pot shops are deemed essential, but gun stores were mandated to close. Private home builders and contractors were ordered closed, but government construction projects proceed. Landscapers are not allowed to work but government landscapers are out manicuring parks. Homeless campers are allowed on every corner of downtown Seattle, Tacoma and Olympia and sleep in parks, but public playgrounds and camp sites are closed to citizens. The Governor announced last week, five million dollars in small business grants of $10,000 which works out to a meager $8 per business in the state.

Another criticism of Inslee was his mandated closure of school for the remainder of the year early in April when virus cases were already on the decline. While once the epicenter and start of the US outbreak of the virus, as of Monday, Washington State had 12,085 and 652 deaths with a steady decline in cases and deaths respectively to 295 and 18 on April 19 from a high of 1,173 and 33 on March 28. While Inslee has praised Washingtonians for “flattening the curve” he has not ruled out extending his stay-at-home order past the May 4 expiration date.

Monday was a day for major announcements as Vice President Mike Pence stated during the daily coronavirus White House Press briefing that every state had enough tests to proceed to Phase 1 of reopening if they meet federal guidelines.

Phase 1 would include states maintaining many current measures already in place such as social distancing, avoiding gatherings of more than 10 people and avoiding unnecessary travel. Monday afternoons Georgia (19,398 cases/774 deaths) Tennessee (7,238 cases/152 deaths) and South Carolina (4,439 cases/124 deaths) announced plans to open their states as early as this week.

Meanwhile more demonstrations advocating for opening the economy are planned in the coming week across the country.