Protests and controversy brew ahead of Vancouver Meghan Murphy talk 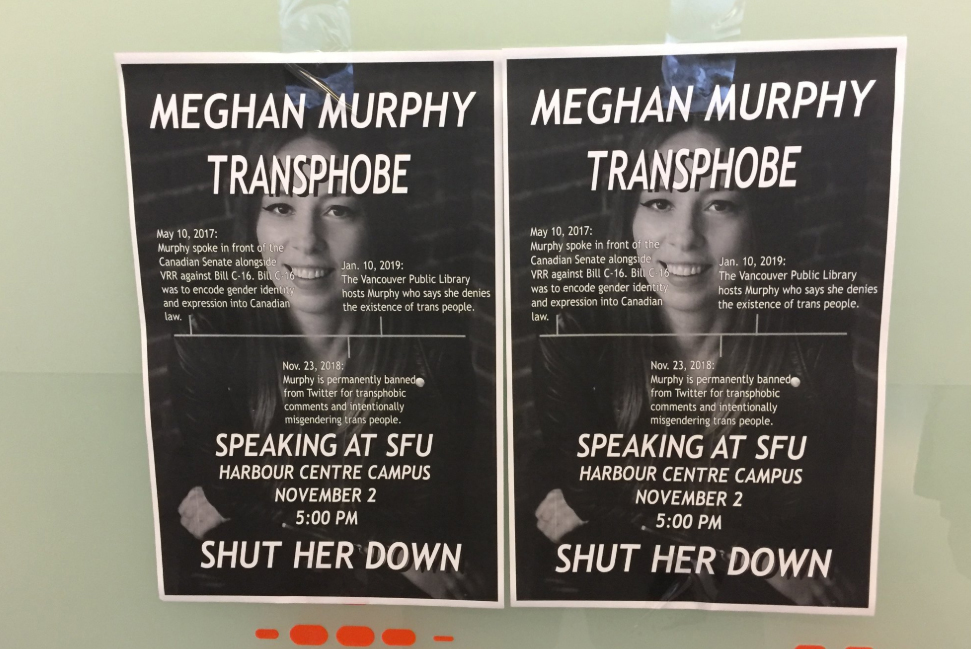 While Toronto dealt with its own Meghan Murphy-related drama, back in her home city of Vancouver, controversy is well underway regarding the third #GIDYVR Still Talking event, entitled “How Media Bias Shapes the Gender Identity Debate,” on November 2nd at Simon Fraser University’s Harbour Centre campus.

In a city where talks critical of gender ideology draw more protesters than Jordan Peterson or Ben Shapiro, Collard, no stranger to hosting hot-button events, says sex is “one of the most important variables to consider in relation to [evolutionary history],” but that he’s concerned about how the media have covered it.

“A lot of journalists now seem to be very confused about key issues … and some of them seem intent on denying the importance of sex as a category, period,” he said in an interview with The Post Millennial. “Given this combination of interests and concern, collaborating with the Feminist Current people on a panel looking at the media’s treatment of sex/gender was an obvious thing to do.”

Collard believes one of the roles of a professor is to facilitate public discussion about controversial issues. “I also believe that we haven’t been doing a very good job of this in recent years,” he added.

On September 25th, SFU Vice-President Academic Jon Driver released a statement defending Collard’s academic freedom to organize the event: “Universities operate on the principle that freedom of expression is a core component of intellectual enquiry and central to the pursuit of knowledge,” it read. “As such, we support the right of faculty and other SFU community members to engage in free speech within the limits of the law.”

Though SFU’s administration has stood fast, criticism has come from within the Simon Fraser Student Society. Out On Campus, an SFSS group that supports the university’s LGBTQ+ community is one of the groups organizing a protest outside the Harbour Centre campus the night of the event. The Coalition Against Trans Antagonism, which is not affiliated with SFU, is also planning to protest.

Out On Campus and the Coalition Against Trans Antagonism, a more radical group, conflict in their preferred methods of protest. According to their Facebook event listing for the protest, OOC strongly discourages “any action that would breach any laws or the Student Conduct Policy, including preventing entrance into the building, intimidating or threatening event attendees, damaging property, and engaging in violent behaviour.”

A supporter of CATA calling herself Hailey Heartless wrote a piece on Medium criticizing what she calls “an organising style rooted in academia and the protection of individuals with the ability to access it, which leaves important voices behind and may expose individuals to harm.”

OOC also liaises with police, a tactic CATA and Hailey Heartless strongly oppose—especially their work with Tim Marron, a former sergeant at The Evergreen State College who was involved in lobbying in 2008 to procure AR-15s for the campus police. Marron seems to be represented by the initials “TM” in OOC’s minutes for their first meeting about a protest, where he is said to be “experienced with protests” and advocates that OOC work to “keep protestors focused and out of trouble (e.g., obstructing entrance, sidewalks, or road, or intimating entrants).” Marron’s involvement is repeatedly mentioned in Facebook comments on OOC’s page from CATA supporters and specifically called out in Hailey Heartless’s Medium article.

The minutes also designate CATA’s messaging and approach as potentially “incompatible” with theirs.

“Neither group has reached out to me to ask me about the event,” Collard says. “Nor have any of the SFU faculty members behind the petition that calls for the event to be shut down. Not a single one.”