In a White House press conference Wednesday, held on Air Force One, a reporter asked Press Secretary Jen Psaki to respond comments on vaccine mandates in the private sector, as well as the "far-right" fearing that vaccination door knocking means forced government vaccinations. 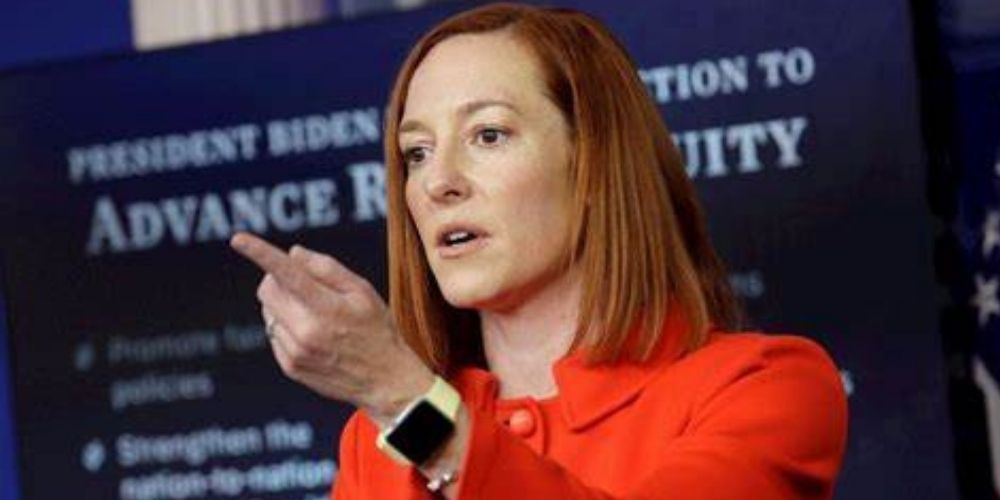 In a White House press conference Wednesday, held on Air Force One on the way to Crystal Lake, Illinois, a reporter asked Press Secretary Jen Psaki to respond comments on vaccine mandates in the private sector, as well as the "far-right" fearing that vaccination door knocking means forced government vaccinations.

"Yesterday you talked about door knocking, which is a pretty standard thing, and it was picked up in the far-right sphere as 'the government is going to come to your door and make you get the vaccine.' I’m wondering you’re reaction to that," asked a reporter also asking if that the messaging would hurt vaccination efforts.

"What this effort is is a continuation of what we have seen as an impactful effort that we’ve had by local public health officials and volunteers in a range of communities over the last month of action," said Psaki. "We’ve actually seen an impact, a positive impact of a range of steps we’ve taken in states like Florida, Mississippi, others where there have been lower vaccination rates.

Psaki stated that in Florida over the last month, the vaccination rate of adults has risen over four percent.

"But what we’re doing is local officials are going to areas where there are lower vaccination rates and providing information on where people can get access to a vaccine, where they can go, that it’s free, that they can take time off of work," said Psaki, adding that "It’s up to individuals to decide whether they want to get vaccinated or not."

Psaki added that a lack of access and information has been the largest barrier to people getting vaccinated, and that they would continue top deeply these tactics to get others vaccinated who are hesitant.

In response to Psaki’s comment that vaccination is up to the individual, another reporter asked whether mandates would be the way to push vaccination rates further.

The reporter pointed out that while some public health officials appreciate the "voluntary nature" of getting vaccinated, they also think that the only way to get to much larger numbers of vaccinated people is if there are mandates" whether it be by private companies, public schools, or states.

He goes on to ask whether the federal government’s stance really is that they "do not want to encourage the kind of mandates that public health officials say would work?"

Psaki responds by saying that "that’s not currently the role of the federal government."

"Our role is to provide supply, provide information, provide public health experts, as to your point, there are a number of private sector entities, universities, institutions that are starting to mandate, and that’s an innovating step that they will take and they should take," said Psaki. "We’re not taking issue with that."

In response to further questioning on entities that want the federal government to push the vaccine, Psaki said "I think the important thing to remind everyone of is that one, we have reduced the rate of COVID by 90 percent. We’ve reduced the death rate by 90 percent. Almost 70 percent of the adult population is vaccinated. And we’re continuing to press further.

There are institutions, there are private sector entities that will take this step, and we’re not standing in their way. Those are innovative steps. Go forward and take steps that you feel are appropriate. We’re just talking about what the role is of the federal government.," Psaki concluded.