An Ottawa school board trustee’s interview on a local radio station ended abruptly on Tuesday morning after the discussion about proposed mask mandates got heated and the host hung up on her. 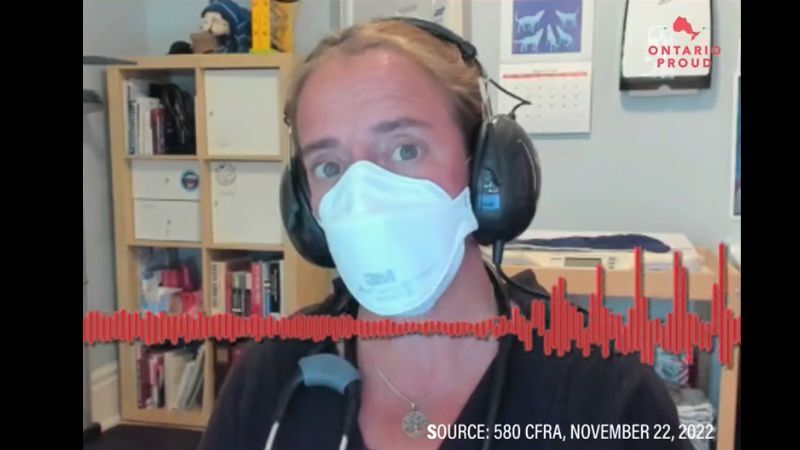 An Ottawa school board trustee’s interview on a local radio station ended abruptly on Tuesday morning after the discussion about proposed mask mandates got heated and the host hung up on her.

Dr. Nili Kaplan-Myrth was being interviewed by Bill Carroll on CFRA’s The Morning Rush. The topic of conversation was the proposed Ottawa-Carleton District School Board (OCDSB) reinstatement of the mask mandate, and Kaplan-Myrth was on the attack right from the moment she was introduced, accusing Carroll of spreading "misinformation."


"I have to start off right off the bat by correcting the misinformation that you just said," began OCDSB trustee and family doctor Kaplan-Myrth. "Covid is not gone. Covid is still very much here, as is influenza, as is RSV."

When Carroll tried to interject to say that he was referring to a CBC article in which several doctors had said Covid isn’t the reason for children’s hospitals currently being overwhelmed but that instead it is RSV that largely spreads through daycares and preschools, a demographic not covered by mask mandates, Kaplan-Myrth got rather irate, asked Carroll not to interrupt, and then continued to talk over him.

At this point, Carroll hung up on Kaplan-Myrth, saying "we don’t need that kind of anger right now," before suggesting that perhaps it was that attitude that was the reason for all the backlash the trustee has been receiving for her stance on masking.

The OCDSB is set to debate the proposed reinstatement of the mandatory mask mandate on Tuesday, after Kaplan-Myrth proposed the motion, but according to the CBC, Ontario’s Ministry of Health says school boards don’t have the power to make such a decision; instead, it’s up to Ottawa Public Health to decide.

Newly appointed OCDSB chair, Lyra Evans, however disagrees, claiming that legal advice received by the board indicates that it is within their "legal authority" to bring masks back.

"There are a lot of strong opinions in the community," Evans told the CBC, while acknowledging the backlash members of the board have been receiving from people who oppose masking.

At least one board member is not supportive of the motion.

"I’m very disappointed and saddened that our new board … is starting off our new mandate with an unnecessary and very divisive debate about mask mandates," Donna Blackburn, trustee for Barrhaven, told the CBC. "The board has no authority to enforce the mask mandate."