Another slide teaches students about the "Bisexual Umbrella," and that students can diverge from "vanilla sexuality." 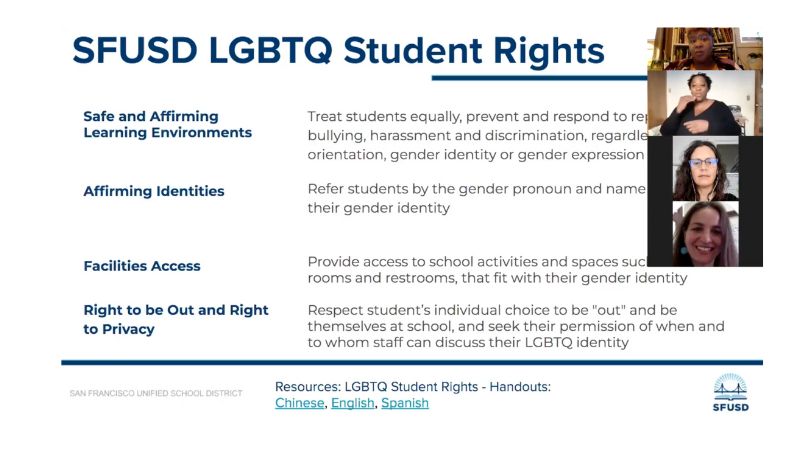 Hannah Nightingale Washington DC
Sep 30, 2022 minute read
ADVERTISEMENT
ADVERTISEMENT
The San Francisco Unified School District has been revealed to facilitate the gender transitions of students in fifth grade and below, and teaches its children that they can diverge from "vanilla sexuality."

In documents obtained by Christopher Rufo through a whistleblower, the schools as revealed to have celebrated "International Pronouns Day" last year, which occurs on October 20.

In a flier for the day, it states that "referring to people by the pronouns they determine for themselves is basic human dignity."

A slide show teaches school-aged children about pronouns, with a stick figure expressing distress over having to "choose" between boy and girl.

"Ack, are there really only two choices?" The slide states. "Sometimes I don’t feel like a boy OR a girl."

Another slide has students separate a number of concepts and ideas into four categories: "Gender Expression," "Gender Identity," "Sexual Orientation," and "Sex Assigned At Birth."

Some of these concepts include "Femme/Feminine," "Asexual," "Twi-Spirit," "Allosexual," and "Hair Style."

Another slide teaches students about the "Bisexual Umbrella," and that students can diverge from "vanilla sexuality."

The slide defines bisexual as "anyone attracted to people of more than one gender," and stresses that "it is not tied to the gender binary."

"The two (bi) refers to people of the same & different gender identity as the person feeling the attraction," it explains.

The district has also released a guide explaining how the "neopronoun" "it" is being "reclaimed" by the LGBTQ community, and that students who use this neopronoun should be "affirmed."

"A rough analogy here is the n-word," the guide explains. "Not everyone who is a member of the African diaspora is comfortable with the use of the word — hard r or not whether used by another Black person or not but it definitely becomes a much larger issue when used by a non-black person."

"But everyone recognizes it as a word that has very clear rules of use, and very real consequences for misuse as well," the guide states. "While the n-word — depending upon ending a vs. er — has this maybe kinda sometimes agreed upon use, 'it' does not."

The sheet also asks students what their pronouns are, as well as "what is your favorite way to have fun?"

In a training, staff members discussed how students have the "right to be out at school, and to not have that information that they are 'out'—with new pronouns, with a new identity—in any way shared with those folks at home."

Later in this video conference, obtained by Rufo, staff members said that parents cannot opt-out of lessons pertaining to gender identity or sexual orientation because "that’s about learning about different people in your community," and these topics are included in Social Studies, ELA, Art, and other subjects.

According to Rufo, these groups "connect students to mental health professionals and clinics that offer gender-affirming health services," such as puberty blockers, hormone therapy, and gender surgery."