A Saskatchewan man ripped down and burned a Nazi flag that has been hanging on the roof of a house in the village of Kelliher. 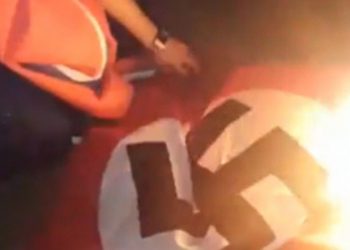 A man has ripped down and burned a Nazi flag that has been hanging on the roof of a house in Kelliher, Saskatchewan.

The village of Kelliher has a population of roughly 200.

The flag caused controversy earlier last week pushing Mayor Darcy King to state that it had to come down.

On Friday, according to CTV, the mayor said that the individual who put up the flag was a 34-year-old who “never grew up” and was living with his grandfather.

The man had allegedly told him that he would take the flag down.

Caleb Pelletier, a Saskatchewan native and George Gordon Grist nation member decided he did not want to wait though and proceeded to take rip down the flag and burn it.

Pelletier posted a video of the flag burning on Facebook.

“I believe it affected so many of our people,” said Pelletier in a Canadian Press article.