Women athletes "have been bullied into silence and today we speak for them, hoping tomorrow, they are brave enough to find their voice," said Save Women’s Sports founder Beth Stelzer. 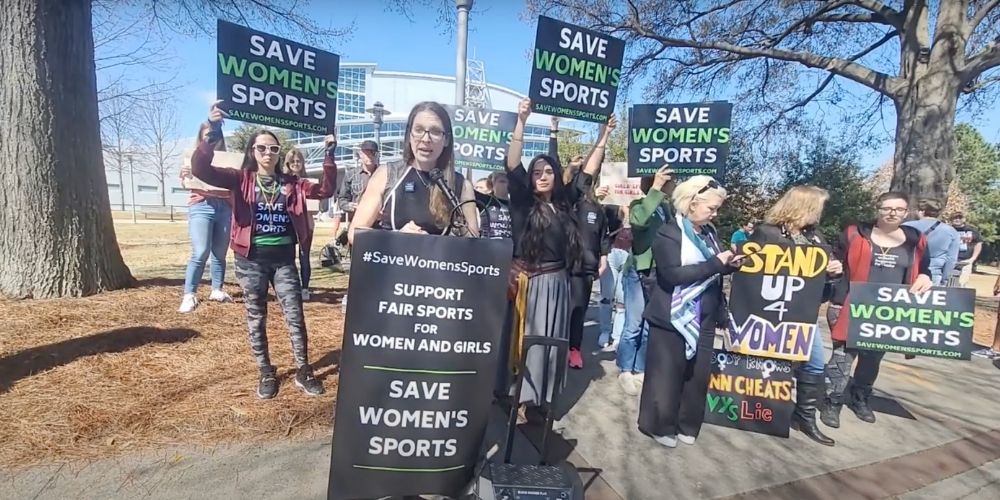 On Thursday, Save Women’s Sports celebrated three years of work while holding a demonstration outside the NCAA Championships in Atlanta, where biological male Lia Thomas is competing against biological female competitors.

"We are here in Atlanta at the NCAA division one women's swimming championship to celebrate three years of Save Women's Sports, and also to celebrate the young women swimming in that pool who are being robbed of their opportunities and titles while being forced to share their locker room and pool with a male body. They have been bullied into silence and today we speak for them, hoping tomorrow, they are brave enough to find their voice," said Save Women’s Sports founder Beth Stelzer.

The first of the speakers, Idaho state Representative Barbara Ehardt, said she remembered a time when Title IX was not in place.  Ehardt was one of the state’s representatives that sponsored House Bill 500, the Fairness In Women's Sports Act.

"I was born in the 60s grew up in the 70s at a time where people asked me when I was little what I wanted to do when I grew up. And all I told him is I wanted to play sports. And I was literally told that's not what girls do. You see Title Nine changed my life. And here we are on the 50th anniversary of Title Nine and what are we doing? We are celebrating non binary and transgender athletes. It makes no sense. Why is the NCAA not standing up for women?" She said.

"There are differences between us as men and women boys and girls and you know what? We should celebrate it. It's okay that we're different. The Lord made us that way," she added.

Stelzer then introduced Kellie-Jay Keen, also known as Posie Parker, who said that while she is not a sports woman herself, she was there to illustrate that "men cannot be women."

She said that there are children in the country that are having their "breasts sliced off" at 12 and 13 years of age.

"I know that girls are losing their space to sport, but children are literally losing their bodies, their sexual function, and their fertility at the behest of this insane, pernicious ideology that makes no sense at all. There are young women across the street who are supporting this because... they've never even been told that it's okay to say no," said Parker.

In video taken during trials at the NCAA championships where Thomas was swimming, a person could be heard yelling "cheater" Thomas swam.

Parker confirmed to The Post Millennial that she was one one yelling.

During the demonstration, Stelzer announced that Concerned Women for America has filed a formal complaint with the US Department of Education Office for Civil Rights against the University of Pennsylvania, in regards to allowing Thomas to compete, violating the "protection for women on the basis of sex, something we thought we secured about 50 years ago and Biden erased."

Speaking as a representative for Young Women for America, Chloe Satterfield explained how men have advantages over women in sports.

She also said that in her senior year of high school, she competed against a freshman male that identified as a female.

"Even though I had gone through years and years of extensive coaching and performance training, I lost not because this athlete had trained longer or had a better strategy, but because of his inherent biological speed, strength and stamina. The playing field, or court in this case, was uneven and I was a clear loser," she said.

"So when we weren't allowed to do that, oh, they knew who women was. So all of a sudden, here we are, 2022, and somehow we magically forgot what a woman is. How did that happen? Well, I would say it's just the inability to say no. When a man wants something, nobody knows how to say no," said Blade.

The demonstration featured a number of athletes, coaches, and advocates speaking out against biological males competing in women’s sports.

It also saw counterprotestors, who yelled, "f*ck you transphobe a**holes."