"Schlong Covid" garnered over 40 percent of the vote from Tucker Carlson's audience and claimed the top spot for the new title. 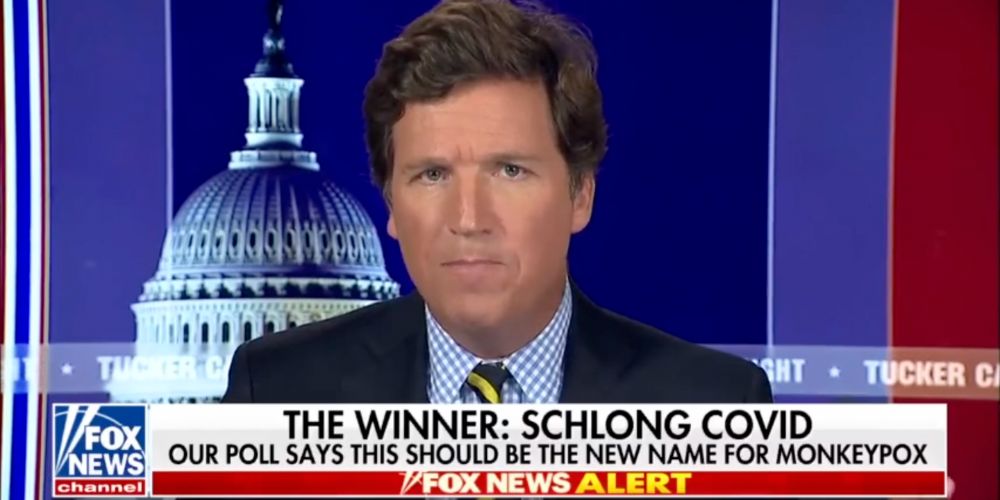 Fox News host Tucker Carlson polled his audience to find a new name for monkeypox and Friday night he announced the winning title for the virus: Schlong Covid.

"So we had a vote," Carlson announced, "There was no ballot harvesting. You can trust our counting. And the new name for monkeypox is now officially - and we're declaring it - Schlong Covid."

The host decided to take on responsibility for renaming the communicable disease on Thursday night after reports surfaced that public health officials believe the name "monkeypox" to be racist.

On Twitter podcaster Jason Whitlock wrote, "Tucker is trying to take my title as the king of the nicknames. Schlong Covid is the GOAT."

European parliament member Christine Anderson said it was "Tucker at his best" and that the name made her go "right into one my of laughing fits!"

In early June, over 30 scientists said that there was an "urgent need for a non-discriminatory and non-stigmatizing nomenclature for the monkeypox virus." On June 14, WHO director Tedros Adhanom Ghebreyesus said he was “working with partners and experts from around the world on changing the name of monkeypox virus.”

On July 26, Ashwin Vasan, the 44th Commissioner of the New York City Department of Health & Mental Hygiene, wrote a letter to the World Health Organization demanding that the monkeypox virus be immediately renamed, citing "racism" as the primary reason.

For Carlson's audience, Schlong Covid was the clear victor with over 40 percent of the votes.

"So let Rochelle Walensky at the CDC know," Carlson said, "her number is 1-800-232-4636, Wait for the prompt on monkeypox and make your voice heard because it's still a democracy."

This comes after the WHO declared monkeypox a global health emergency on July 23, as well as pressure from Congress after the recent first confirmed cases of monkeypox in children in the US.