During the ongoing riots in Seattle in August of 2020, Thomas-Kennedy referred to police as "armed thugs," supported black bloc Antifa activists and tweeted that "Property destruction is a moral imperative." She also praised activists for blocking ambulances in a now-deleted tweet. 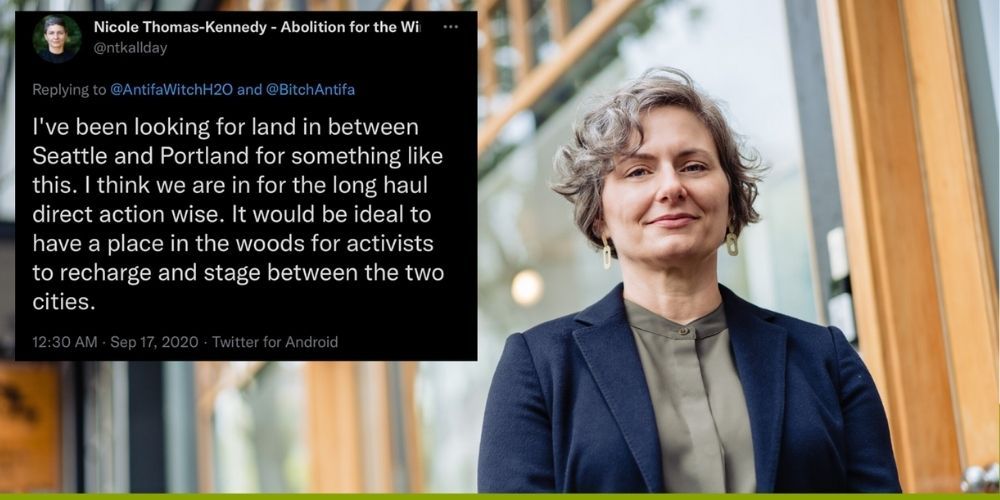 A police and prison abolitionist and riot advocate running to become the next Seattle City Attorney previously looked for land to create staging grounds for Antifa.

Nicole Thomas-Kennedy, the Antifa-supporting candidate vying to replace the incumbent, had previously tweeted that she was looking for land in between Portland and Seattle to stage riots.

On September 17, 2020, Thomas Kennedy wrote, "I’ve been looking for land in between Seattle and Portland for something like this," referencing the tweet by another Antifa supporter whose post she commented on, which was looking for a location to stage riots for the anarchist group. She added, "I think we are in for the long haul action wise. It would be ideal to have a place in the woods for activists to recharge and stage between the two cities."

Antifa activists frequently travel between the two liberal cities in the Pacific Northwest. Radicals were often sighted attempting to burn down the federal courthouse in Portland during the riots in the summer of 2020 that ravaged the city, then a day or two later, were sighted again at the deadly month-long 'autonomous zone' in Seattle.

When the tweet, as well as hundreds of other radical posts, came under scrutiny, Thomas-Kennedy began deleting the tweets.

Thomas-Kennedy’s tweets included messages supporting arson in Kenosha during the deadly riots in the wake of the death of George Floyd. Her supporters previously attacked people on social media for posting the candidate's old tweets by calling them fake. A deep dive of her Twitter history demonstrated that her top hashtags are anti-police and pro-riots.

During the ongoing riots in Seattle in August of 2020, Thomas-Kennedy referred to police as "armed thugs," supported black bloc Antifa activists and tweeted that "Property destruction is a moral imperative." She also praised activists for blocking ambulances in a now-deleted tweet.

When Antifa and BLM rioters lit a construction site for the new Juvenile Detention Facility on fire, she tweeted: "Yay! Thank you to the heroes that set the Children's Jail on fire!"

The radical also called cops serial killers and called an attempted bomber of a police station "a hero."

Thomas-Kennedy in other deleted tweets called for the overthrow of capitalism and advocated for communism while discussing her hatred for America.

Thomas-Kennedy even joked about the brutal murder and dismemberment of a local single mother by her boyfriend in 2020.

Thomas-Kennedy, according to her website, left the public defender's office to take on "pro bono activist defense work, part-time public defender contract cases, and volunteer with the National Lawyers Guild" during the riots in 2020 led by Antifa and BLM, presumably to advocate for the rioters.

On her website the public defender said she will legalize most crimes, claims the criminal justice system is racist and bigoted. According to an interview, the radical activist wants to cut the city attorney’s criminal division and stop prosecuting many types of crimes.

Former Washington state Democrat Governors Gary Locke and Christine Gregoire endorsed Republican Ann Davison for Seattle city attorney, while taking the Thomas-Kennedy to task after she pledged to stop most misdemeanor prosecutions, as well as for her previous statements.

Though the race is non-partisan, local Democrats rushed to defend their radical candidate. Shasti Conrad, chair of the King County Democrats, lashed out at the endorsements on social media against the former Democrat governors and posted on Twitter: "You can’t call yourself a democrat and support a Republican for this job. You also can’t consider yourself an authority on much of anything when you’re supporting a candidate who literally said they don’t know how to do this job. Out of touch and playing old politics."

Many Seattle residents have compared Thomas-Kennedy's proposals to actions taken by San Francisco District Attorney Chesa Boudin. A second recall effort was recently launched against the activist. According to Fox News, residents are "fed up" with his progressive policies, such as his push to reduce jail funding and refusal to prosecute repeat offenders. Citizens are concerned that this enables the streets to remain home to open-air drug dealing and violent crime which has spread into the suburbs.