"Some recruits are saying they heard the car accelerating, they estimate around 30 to 40 miles per hour. You can see how little reaction time that allows someone." 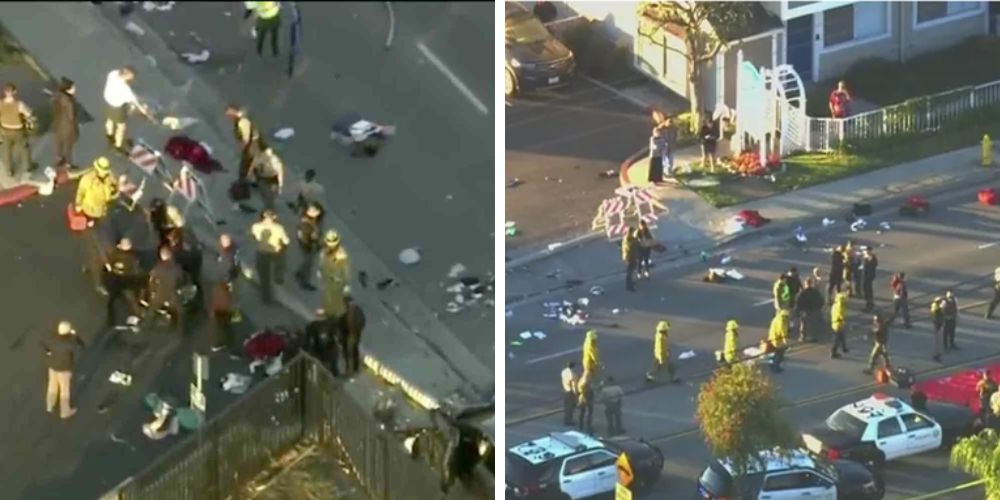 The footage, taken from a camera in a nearby resident's backyard shows a group of several dozen sheriff’s department recruits wearing white T-shirts jogging in formation alongside a residential street.

Two law enforcement vehicles can be seen escorting them from behind and there is very little traffic on the street.

According to Fox News, the recruits are attendees of the Sheriff’s Training Academy and Regional Services (STARS) Center in Whittier, California, a suburb of Los Angeles. Residents told local media that STARS recruits often run in groups in the area while wearing high-visibility vests.

In the video which was edited for graphic content for broadcast purposes by local media, a Honda SUV speeds into the view of the camera driving on the wrong side of the road, and heading straight into the front of the group. There did not appear to be any attempt to slow down or swerve.

Sheriff Alex Villanueva said that the vehicle may have even sped up. "Some recruits are saying they heard the car accelerating, they estimate around 30 to 40 miles per hour. You can see how little reaction time that allows someone."

The vehicle slammed into the recruits and then crashed into a pole sending debris and people flying and creating a cloud of smoke.

Other recruits can be seen rushing to help as well as officers in the accompanying patrol vehicles. First responders from a nearby fire station were on the scene quickly.

According to the sheriff’s office injuries ranged from head trauma and broken bones to loss of limbs. One recruit was hospitalized in critical condition on a ventilator. The LA County Fire Department said there were five critical injuries, four individuals had moderate injuries and another 14 had minor injuries.

The 22-year-old male driver, was given a field sobriety test but according to authorities had no indication of alcohol in his system, authorities said. His identity has not yet been released and the investigation into a motive remains ongoing.