The Antifa supporter and self-identified socialist was also recently fired as a contributor at the Dallas Observer for writing a fake news report. 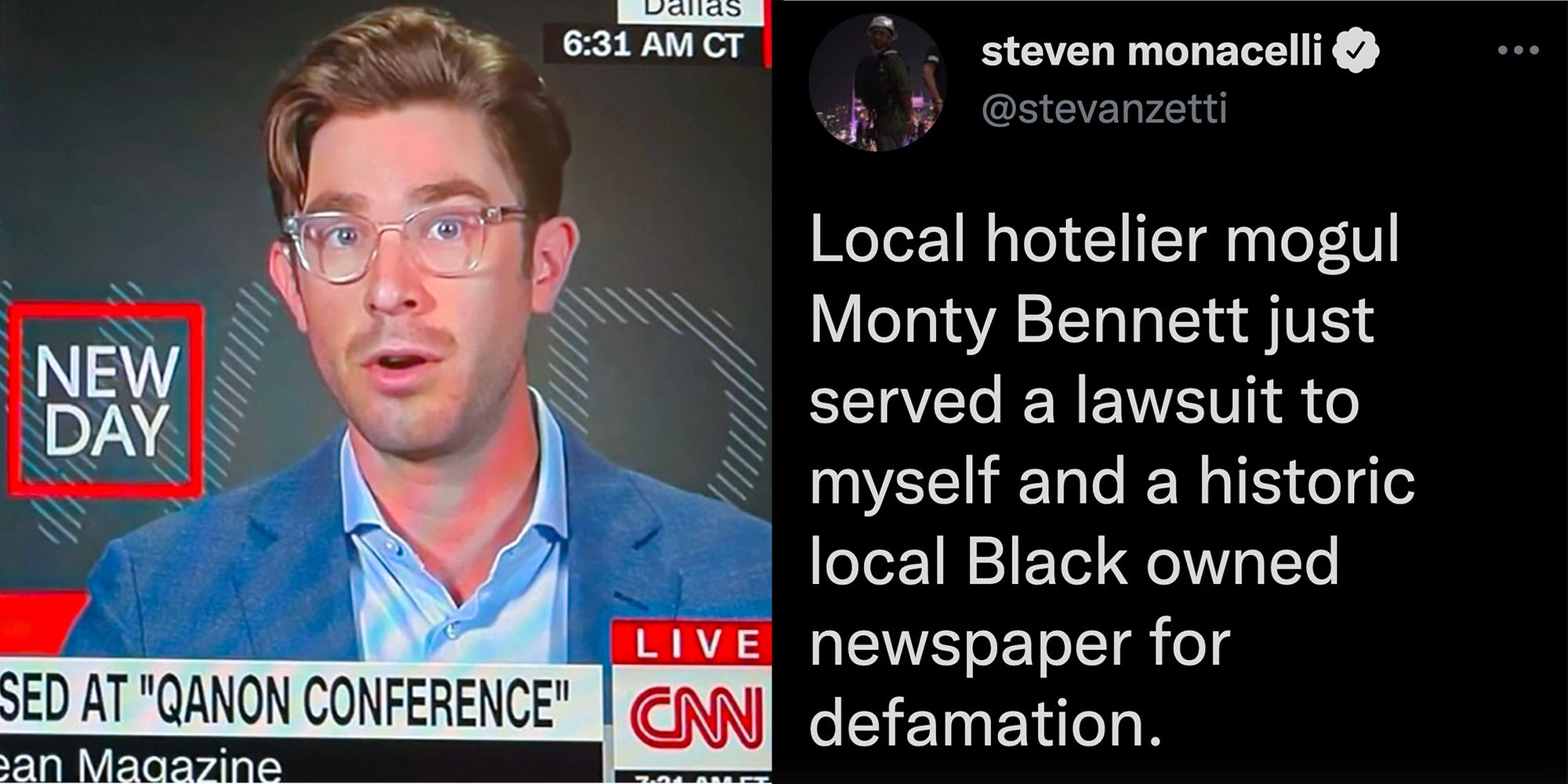 Steven Monacelli, a left-wing writer who has contributed to the Daily Beast and other publications, was served a defamation lawsuit last week by the Dallas Express newspaper and its publisher. The Antifa supporter and self-identified socialist was also recently fired as a contributor at the Dallas Observer for writing a fake news report. Now a woman has come forward to accuse him of making an inappropriate sexualized statement to her.

In February, Monacelli authored a report about The Dallas Express’ publisher Montgomery Bennett in the Dallas Weekly that accused the publication of being a “right-wing propaganda site,” a “fake news site” and linked to an operation that runs fake news sites across the U.S. The lawsuit, filed in Henderson County, Texas by Bennett and his paper on Oct. 13, accuses Monacelli and the Dallas Weekly of printing libel.

“The Dallas Weekly published the false statements with actual malice because it made such statements with reckless disregard for whether they were false and specifically intended to substantially injure or harm plaintiffs,” alleges the lawsuit.

Monacelli, 30, of Dallas, took to Twitter last Wednesday to announce he was served the lawsuit. He also reposted the alleged defamatory article. He asked his followers for recommendations for pro-bono legal assistance.

Despite accusing the Dallas Express of being a “fake news site,” Monacelli was fired in the summer from the Dallas Observer as a freelance contributor after writing a report that falsely suggested a pro-law enforcement group, Keep Dallas Safe, was involved in an elaborate hoax to malign the left.

Two days after publication, the Dallas Observer was forced to retract central parts of Monacelli’s report and issue a large correction.

The correction states: “Keep Dallas Safe, an organization mentioned in the original version of this story, has provided documentation proving that it has no relationship to Dallas Justice Now; its ties to Arena began in June 2021 and were limited to assistance with website design with no connection to Dallas Justice Now. This article has also been edited to remove a reference to and characterization of the Dallas Express.”

(An archive of the original version of Monacelli’s inaccurate report can be read here.)

On Aug. 3, Monacelli wrote on Twitter that he had been fired.

Daniel Taylor, the president and founder of Keep Dallas Safe, says he’s not surprised Monacelli is being sued for defamation after his experience with the writer. “He runs stories without having all the information. He’s always trying to play a gotcha game but the gotcha game finally got him.”

Monacelli’s tweets have included an apparent death threat. In February 2020 he tweeted out a photo of a pistol and ammunition and wrote, “Got a new microphone, ready to interview some Superdelegates.” He later deleted the tweet. Taylor’s wife, Amy Gibson, says Monacelli’s unprofessionalism is reflected in his real life interactions as well.

Gibson says she met him by coincidence at a social gathering on Oct. 7 at Lakewood Landing, a bar and grill in Dallas. She says he told her his girlfriend was on painkillers at home because of a burst ovarian cyst. Then unprompted, Gibson says Monacelli bragged to her he caused the girlfriend’s cyst to burst during sex because his penis is so large.

“It offended me as a woman...it made me feel gross,” Gibson says. “It was also disrespectful to his partner who was at home in pain.”

On Twitter, Monacelli appears to confirm that the sexually inappropriate statement to Gibson took place and faulted her for speaking with this publication. “I told some people that my girlfriend had a ovarian cyst burst after intercourse at a local meetup. Usually it's attended by kind people who wouldn't ever talk to Andy Ngo. But that evening, the people behind @KeepDallasSafe were in attendance,” he tweeted along with a photo of a message to Gibson.

The Dallas Observer has been reached for comment about its separation with Monacelli.