Speculation abounded that the issues were caused by something like an unauthorized strike, where pilot and air traffic control workers walked off the job in protest of the company's vaccine mandate. 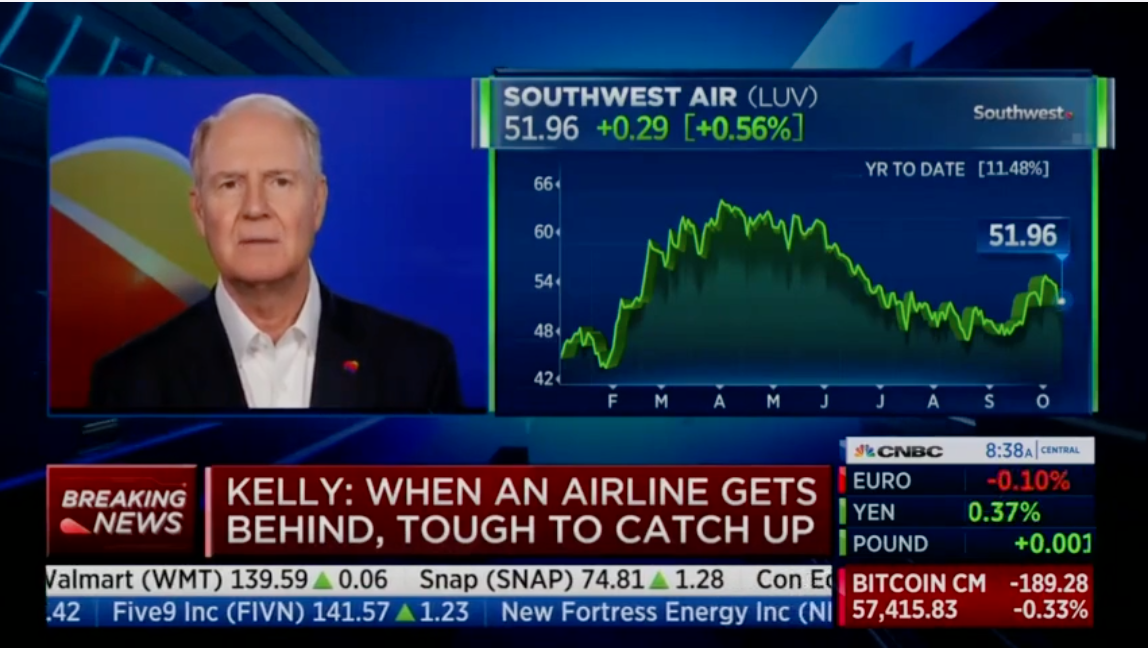 Southwest Airlines CEO Gary Kelly spoke to CNBC after a weekend that saw the airline forced to cancel thousands of flights, with delays and cancellations stretching into the work week.

When asked about the pilot absences, Kelly said "We look at all of our employee behaviors in terms of absenteeism, in terms of people volunteering, to come in and pick up what's referred to as open time. And they're very, they're all very normal. The president of our pilots union has been out talking to the media, confirming all of that. So I think people again that that, understand how airlines work, when you get behind. It just takes several days to catch up."

Kelly told CNBC that he is personally opposed to corporate vaccine mandates, but that the company had complied with President Biden's order that all companies with over 100 workers require those workers to be vaccinated against COVID-19.

"I didn't really see that much cancellations from other companies in your industry. But there's a lawsuit that was filed," CNBC asked Kelly. "Southwest Airlines Pilots Association said in the Northern District of Texas. And what disturbed me about it earlier this year is they say that basically you're using illegal tactics, a form of asymmetrical warfare in negotiations.

"Gary, Gary, you know, when you read this, and then you read about the Texas Governor who says, 'Listen, we're gonna be against mandates,' I see, well, wait, wait a second. Maybe vaccines are an issue. Maybe labor problems—of which Southwest has not necessarily had. So you understand how we quickly just pivot from Florida and FAA, to wondering what happened here with the pilots?" He asked.

"Well, yeah, again, I think that we're uniquely affected because we have so many of our flights that touch Florida, all the airlines were impacted on Friday, it was just more of an impact on us. And it just took us longer to recover," Kelly said.

"But all of our employees work very hard through the weekend. And it's it's tough on our customers, but it's also tough on our people. So they did a phenomenal job. There's absolutely no issue in working with our employees.

"Talking about the vaccine mandate. Oh, yeah. I mean, there are some that have very strong views on both sides of that issue. And you know, it's not, as I think you probably know, I've never been in favor of corporations imposing that kind of a mandate. I'm not in favor of that, never have been.

"But the executive order from President Biden mandates that all federal employees, and then all federal contractors, which covers all the major airlines, have to have a mandate and a vaccine in place by December the 8th.

"So we're working through that. We're urging all of our employees to get vaccinated. If they can't, we're urging them to seek an accommodation either for medical or religious reasons. And my goal, obviously, is that no one loses their job. The objective here obviously, is to improve health and safety, not for people to lose their jobs. So yes, we have some very strong views on that topic, but that that's not what was the issue with Southwest over the weekend."

It reads that "Several times since August 30, 2021, Southwest Airlines has taken new unilateral actions which violate the status quo between the parties in further violation of the Railway Labor Act. Most recently, on October 4, 2021, Southwest Airlines unilaterally rolled out a new and nonnegotiated COVID vaccine mandate for all employees, including SWAPA pilots. The new vaccine mandate unlawfully imposes new conditions of employment and the new policy threatens termination of any pilot not fully vaccinated by December 8, 2021."