Bannon was found guilty by a DC court in July for two counts of contempt of Congress, in regard to his refusal to comply with subpoenas from the January 6 House Committee. Bannon has plead not guilty to the charges. 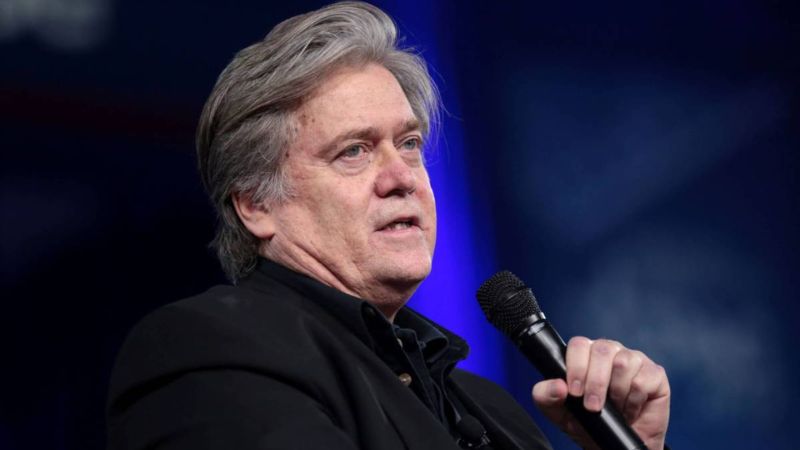 On Friday morning, former Trump advisor Steven Bannon was sentenced to four months in prison and a $6,500 fine on two counts of contempt of Congress by District Judge Carl Nichols. The sentence is to be delayed pending appeal.

Banon had not complied with the subpoenas due to executive privilege invoked by President Donald Trump regarding their communication. Trump later revoked that, clearing the way for Bannon to testify, yet the DOJ continued with their case.

During the Prosecution’s final arguments before sentencing, Assistant US Attorney JP Cooney defended their request for a $200,000 fine, stating that Bannon’s lack of cooperation with the probation office’s financial review only "amplifies [Bannon’s] contemptuous conduct"

"Everyday citizens walk in and out of [the office]" to honor subpoenas and "fill those obligations," Cooney added. "This man… a public figure… chose to hide behind a fabricated claim… to thumb his nose at Congress."

The prosecution opposed Bannon remaining free pending an appeal of the sentence by his legal team.

During the defense’s arguments, attorney David Schoen said, "I hope no American buys into anything (the prosecutor) just said... other than Mr. Bannon should be treated like any other citizen," and that he hopes the record doesn't show "Bannon is above the law" but rather the opposite.

In regards to the prosecution's opposition of Bannon remaining free temporarily after the sentencing is delivered, Schoen said, "Any sentence of incarceration should be suspended.. and wouldn't be appropriate."

Schoen argued that Bannon had been acting on the advice of his legal time in not complying with the January 6 Committee, and that Bannon was adhering to the Constitution and was now "acting above the law."

The defense later continued on to state that the prosecution was  showing "zeal to make Mr. Bannon their trophy," and that "politics has infected this process."

Schoen also said that Bannon would not be saying "I'm sorry," because Bannon believes he was doing the right thing.

Bannon did not speak at the sentencing hearing, telling the judge "my lawyers have spoken."

Before issuing his decision, Judge Nichols noted that the events of January 6 were "undeniably serious," and that many "rioters planned to come to the Capitol with the express purpose of interrupting the proceedings."

"The January 6th committee has every right to investigate what happened that day... what can be done to prevent similar .. events from happening in the future," he added.

Nichols also said that "Bannon did not completely ignore the subpoena or fail to engage with the committee at all," and that it appeared that Bannon was indeed following the legal advice of his attorneys.

He also noted that the committee’s failure to go to the court to enforce its subpoena "cuts in Mr. Bannon’s favor."

"Respect for Congress is of course an important piece of our Constitutional system," Nichols added.

As Bannon was walking into court on Friday morning, Bannon told a crowd that had gathered, "remember, this illegitimate regime, their judgment day is on 8 November, when the Biden administration ends."

"Thank you, and remember, take down the CCP," he added, before walking inside the United States District Court for the District of Columbia.

Protestors outside shouted "fascist" and "traitor"

Bannon was found guilty by a DC court in July for two counts of contempt of Congress, in regard to his refusal to comply with subpoenas from the January 6 House Committee. Bannon has plead not guilty to the charges.

The Department of Justice recommended earlier this week that Bannon should serve six months in prison and pay a $200,000 fine  because Bannon’s actions were "a total disregard for government processes and the law."

The DOJ further cited Bannon's referencing the January 6 committee as a "sham committee," and trial to which he was subjected as a "show trial." That he would be found guilty was known before the trial began.

"Throughout the pendency of this case," the DOJ wrote in its sentencing memorandum, "the Defendant has exploited his notoriety … to display to the public the source of his bad-faith refusal to comply with the Committee’s subpoena."

The DOJ went on to suggest that Bannon's statements made both in public appearances and on his War Room podcast "prove that his contempt was not aimed at protecting executive privilege or the Constitution, rather it was aimed at undermining the Committee’s efforts to investigate a historic attack on government."

"The rioters who overran the Capitol on January 6 did not just attack a building," the DOJ later concluded, "they assaulted the rule of law upon which this country was built and through which it endures. By flouting the Select Committee’s subpoena and its authority, the Defendant exacerbated that assault."

In response to the DOJ’s sentencing recommendations, Bannon’s legal team requested that Bannon serve his sentence at home, and that he should only receive probation "for relying on the advice of his lawyers."

"Should a person be jailed where the prosecutor declined to prosecute others who were similarly situated – with the only difference being that this person uses their voice to express strongly held political views?" his lawyers, Evan Corcoran and David Schoen wrote.

Bannon had been asked to testify about his knowledge of the Capitol riot on January 6, 2021, to which he told the committee that he could not reveal the contents of private communications between himself and former President Donald Trump due to Trump's invocation of executive privilege.

In July, Trump revoked his executive privilege over Bannon, allowing him to testify before the committee.

"I write about the Subpoena that you received in September 2021 from the illegally constituted Unselect Committee, the same group of people who created the Russia Russia Russia scam, Impeachment hoax #1, Impeachment hoax #2, the Mueller Witch-Hunt (which ended in no "Collusion"), and other fake and never-ending yarns and tales," Trump began in the letter.

"When you first received the Subpoena to testify and provide documents, I invoked Executive Privilege. However, I watched how unfairly you and others have been treated, having to spend vast amounts of money on legal fees, and all of the trauma you must be going through for the love of your Country, and out of respect for the Office of the President.

"Therefore, if you reach an agreement on a time and place for your testimony. I will waive Executive Privilege for you, which allows for you to go in and testify truthfully and fairly, as per the request of the Unselect Committee of political Thugs and Hacks, who have allowed no Due Process, no Cross-Examination, and no real Republican members or witnesses to be present or interviewed. It is a partisan Kangaroo Court," the letter continued.